The Kind of Face You Slash - Day 15: Something is Happening in the Earth 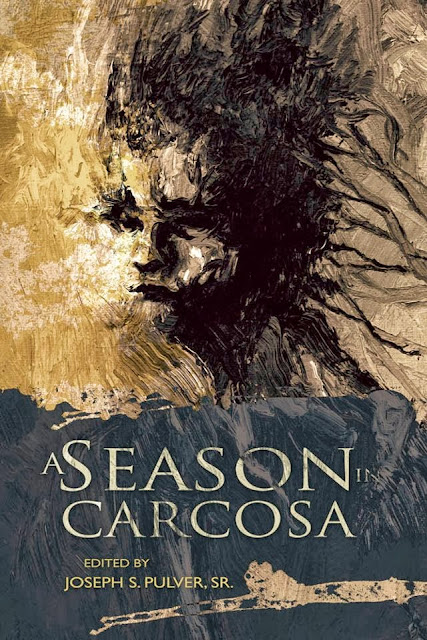 In 2008, the first year of The Kind of Face You Slash -- in fact, it was my second post -- I wrote a little bit about Robert W. Chambers and his horror collection from 1895 called The King in Yellow.  Because I link to it here does not necessarily mean that I recommend you read it, but there it is.  The four stories from that collection that have kept this single book by the prolific Chambers in print for more than a hundred years, despite what was, at least according to E. F. Bleiler, who wrote the introduction to my Dover reprint, an otherwise uniquely undistinguished (though remunerative) writing career, revolve around a mysterious and evil play called "The King in Yellow," which drives those who read it or see it performed mad, and could signal some especially bizarre form of Apocalypse.  The two most famous stories are probably "The Yellow Sign," an excellent story that sets the legend in place, and "The Repairer of Reputations," a singularly odd, chilling, and rather wild story story with several moving parts, a story that is not just horror but also science fiction (I don't know for sure, but it may be the first piece of fiction to imagine the invention of public suicide booths).

I bring all of this up now because last year horror writer and editor Joseph S. Pulver, Sr. published a book called A Season in Carcosa, an anthology of original stories by twenty-one horror writers that take as their inspiration Chambers and his "King in Yellow" stories.  My thinking on this is that, while I remain tired of the trend of writing new horror that exists specifically to hitch its wagon to horror fiction from the distant past, at least it's not Lovecraft again.  And Chambers wrote very few horror stories anyway, so it's not like he himself already ran his idea into the ground.  Besides which, Chambers himself was influenced by a four-page story (depending on the dimensions and margins and print-size of the version you're reading) by Ambrose Bierce called "An Inhabitant of Carcosa," Carcosa, the reader gathers from the brief excerpts of that mysterious play Chambers talks about, being the setting of "The King in Yellow" (as opposed to the stories in The King in Yellow, which tend to be set in places like London, Paris, and the like).  The Bierce story itself reminds me of the horror poetry (I don't know how else to describe the specific poems I have in mind) of Stephen Crane, though chronologically speaking if anyone was influenced by the other, Crane's poetry collections were published after Bierce wrote "An Inhabitant of Carcosa."  Regardless, Crane could have written that story, with its blasted city, lost soul, gibbering and threatening figures, and horrible tone of hopeless doom. 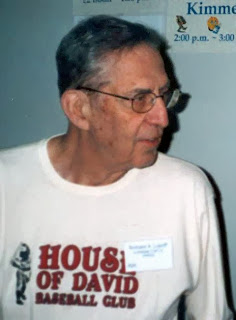 The Bierce story is brief enough, and Carcosa itself vague and something of a metaphor, that Chambers could be influenced without having to borrow anything.  Meanwhile, Chambers' horror fiction, few though there are, is quite specific in its concept so that anyone wishing to grow something from it is going to have a hard time plowing an entirely new field.  And so we find it in at least one of the stories I read for today, from A Season in Carcosa.  So it goes, what can you do, and etc.  Are they any good, though, is the question.

The first story I read is called "April Dawn" by Richard A. Lupoff.  I'd read neither of the two authors under discussion today, but I knew who Lupoff was.  Known primarily, at least at one time, as a science fiction writer, Lupoff wrote a novel called Space War Blues which itself was an expansion of his novella "With the Bentfin Boomer Boys on Little Old New Alabama."  That story was commissioned by Harlan Ellison for his anthology Again, Dangerous Visions, and the paperback of Space War Blues contains an introduction by Ellison and another by Lupoff, about why it took so long for that the rights to Lupoff's story to revert to him so that he could sell the novel version, a delay that cost Lupoff no little bit of money.  Ellison's introduction can be summarized this way:  "What a great story, everybody was screwing us over!" whereas Lupoff's boils down to "I guess everybody has their side of the story, I'm just so fucking tired."  So that's how I know Lupoff, but "April Dawn" is the first piece of his fiction I've read.  And it's an interesting bit of mild meta-fiction -- mild in that it's not obnoxious -- about an Irishman named John O'Leary who flees his restrictive hometown to travel the world, have adventures, and ending up in San Francisco as the amanuensis of Abraham ben Zaccheus, a Sherlock Holmesian, Doc Savage-ish detective and thrill-seeker whom O'Leary occasionally refers to as The King of All the Jews.  Our story takes place in the early part of the 1900s, and as Abraham and O'Leary are finishing up a case, words reaches them that Robert W. Chambers, an old friend of Abraham, is in San Francisco and would like to meet up.  When they do, he announces with relish that an opera has been composed based on The King in Yellow, and the two men will be treated to a private performance.

"April Dawn" reminds me a little bit of certain stories by Karl Edward Wagner, such as "Sign of the Salamander, by Curtis Stryker, with an Introduction by Kent Allard" and "Blue Lady, Come Back."  Those stories are even more extreme post-modern takes on pulp adventure and mystery that are twisted, finally, into horror, but "April Dawn," while much shorter than those, packs in a fair bit of Lupoff's take on similar ideas.  It could be longer, frankly, as some of the elements that help turn "April Dawn" into a horror story are introduced and paid off too quickly to have the impact Lupoff is going for, but it's a good idea, an intriguing take on the assignment set out by A Season in Carcosa, intriguing enough, in fact, that if Lupoff ever wanted to expand this one into a novel as well, I'd grab me a copy.  Not that he probably wants to hear it after Space War Blues, but I liked it, and wished it was less compact.  They say a good short story never wastes a word, but I think Lupoff could've wasted a few.

In "King Wolf," the other story I read, author Anna Tambour has taken a rather different, far less literal approach, which is to almost not seem to deal with Chambers or The King in Yellow at all.  It's very strange.  My kneejerk reaction is to say that she either mildly doctored a story she already wrote, or she had a separate idea that, when the orders came down from Pulver, she decided to use A Season in Carcosa as an excuse.  I obviously have no idea if either situation is the case, but, as I said, it's very strange.  In terms of influence, with "King Wolf" Tambour seemed to set out to write a mix between C. S. Lewis's The Chronicles of Narnia and James Vance Marshall's Walkabout, with a slight horror twist. 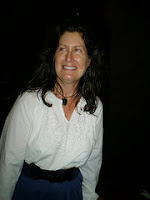 The Lewis connection is explicit, by the way, the Walkabout one only slightly less so.  The story begins with an Australian family travelling to the funeral of Selwyn Lovelace Wilde Carrett, the Carrett family patriarch.  The man driving the car is Alex, the dead man's grandfather.  The four children, whose improbable names are Safire, Emrald, Wolf, and Lovie, are therefore the dead man's grandchildren.  Their angry father is a banker -- that bastard -- and their mother isn't overly fond of children in a general sense.  Which is fine as it turns out because the car crashes and the parents are killed.  The children are left, more or less happily, on their own in something at least close to the outback.  The youngest, Lovie, a four-year-old girl, is doted on by all, but especially by her brother Wolf, the next youngest at eight.  Wolf is familiar with Lewis's fantasy series and is unhappy that he resembles the recent film adaptation's version of "the selfish little brother," "the slimy, sweet-loving sinner" whom his siblings will "have someone they can nobly forgive."  While events in "King Wolf" don't play out quite like that, the siblings do eventually sort of vaguely take on roles of fantasy royalty, sort of -- the irony is not missed on them, is one thing that cuts the idea.  Anyhow, Wolf's devotion to Lovie is perhaps a little bit unseemly; I caught a hint of that which I'm not sure was intended.  But though only eight-years-old, Wolf acts with unnatural maturity, something that bothered me at first but by the end, with all parts of the story in place, this element carries a certain resonance.

Among those elements, I should probably add, are a hint of cultish evil found in memories of the deceased great-grandfather, and idle wondering by Wolf about why yellow is his favorite color, and its presence on reference book about animals given to him by a friendly librarian.  The overall effect of "Wolf Hall," with these last components primarily in mind, is one of intrigued but frustrated puzzlement -- that puzzlement would probably be less if I'd read the story in an anthology that didn't boast such a specific theme.  Although in that case the "yellow" stuff probably wouldn't have had any impact at all, and the fact that I have a reason to wonder about it is part of what's so intriguing.  It's just the damnedest story.

I'm glad, by the way, that the parents don't last long, because Tambour doesn't write them with any authenticity, and the father, especially, is just a cartoon version of a thing Tambour doesn't like.  It's not a subtle story in a lot of ways and some of the prose is jumbled to no good end that I can see.  Yet as I've said, the story has several disparate pieces that, when combined, create something that is unnerving but in an almost inexplicable way.  I almost feel like this story shouldn't work at all.  But clearly, I think it does.
Posted by bill r. at 8:29 PM

"April Dawn" reminds me a little bit of certain stories by Karl Edward Wagner, such as "Sign of the Salamander, by Curtis Stryker, with an Introduction by Kent Allard" and "Blue Lady, Come Back." Those stories are even more extreme post-modern takes on pulp adventure and mystery that are twisted

Don't know them, but have you read his "A River of Night's Dreaming"? I think it was meant as something of a tribute to Chambers and his King in Yellow stories in particular. A strange, vivid and highly atmospheric piece of writing, as I recall. Definitely worth a look if you can find it.

I haven't read it, but I have it around here somewhere...I'll give it a look. Someone reminded me the other day that Raymond Chandler wrote a story called "The King in Yellow" too.