The Kind of Face You Slash - Day 9: I Believe I am a Lovable Person 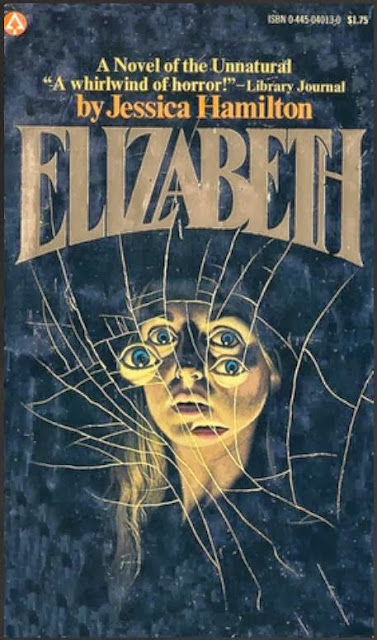 Some places on the internet claim that Jessica Hamilton, the credited author of the 1976 horror novel Elizabeth, also published under the pen name Ken Greenhall, while other places on the internet claim that Jessica Hamilton was a one-time pen name for Greenhall.  One site appears to believe they're separate people entirely.  From what I can tell, though I don't know what the source would be that I could point to that provides definitive evidence, Jessica Hamilton is the pseudonym.  Mainly, I'd say, the fact that the most recent novel published under the Hamilton name was Childgrave in 1981, and that one was reprinted under Greenhall's name in 1982.  Meanwhile, the most recent novel published by Greenhall is a non-horror novel called Lenoir, from 1998.  It may not hold up in court, but anyway.  I bring all this up because, well, you gotta write about something, and also because, probably through no particular effort of his own, Greenhall is a kind of mysterious figure, if only because he made a mark, has a cult, has an alter ego, is out of print, and I can't find a picture of him on the internet.  This may not be terribly interesting, but I find it interesting enough.

Somewhat counterintuitively, the book around which the admittedly small Greenhall cult seems to have been built is also the hardest to come by.  That would be Baxter, also known as Hell Hound, also published both as a Greenhall and a Hamilton book, and, in 1989, adapted as Baxter by French director Jerome Boivin.  I used to see that movie in Blockbuster and Hollywood Video and such and thinking "Hey I wonder what the deal with that one is," and then pfft, all those stores closed down!  Anyhow, the novel is supposed to be quite good, and I would very much like to read it, but $30-$50 is about outside of my price range for used paperbacks.  Let's see if we can get that cost down a little bit guys.

As Jessica Hamilton, Greenhall's best-known novel would have to be the aforementioned Elizabeth, though "best-known" is a very relative term here.  The reason, I'd hazard, that Elizabeth has enjoyed any kind of life after going out of print, is that it's actually quite good.  I'm also forced to wonder if "Jessica Hamilton" was created to take some of the skeeve out of the novel -- a story about a fourteen-year-old girl who is lusted after by, and in some cases satisfies the lusts of, just about every adult man and woman around her might go down more smoothly if a man didn't write it.  I say this not to imply anything about Greenhall -- I genuinely don't mean that -- but Elizabeth, while not sexually graphic, would be a mighty tough sell, at least these days.

A witchcraft novel at its heart, much of the power of Elizabeth comes before that aspect becomes explicit.  A good idea of the tone of Elizabeth -- not to mention Elizabeth, who narrates -- comes on the third page, at the end of the first chapter.  After a preamble about mirrors (which I can assure you is significant) and who she is, to set up her present circumstances she says:

I first came to live with Grandmother about a year ago, after I killed my parents.  I don't mean to sound callous.  Let me explain.

She did indeed murder her parents, by casting a spell that caused them to drown.  And so she ends up living with her wealthy grandmother in their family home in Manhattan, next door to the offices of her wealthy grandfather, estranged from Martha, the grandmother.  Elizabeth also lives with her snake-obsessed young cousin Keith, her aunt Katherine, and her uncle James, Elizabeth's "lover."  Into the home comes a tutor, Anne Barton, a dowdy woman whose spinsterish nature makes her vulnerable to Elizabeth's mind games, though, spinster or not, Miss Barton appears to develop a surreptitious, though no one is fooled, sexual relationship with Katherine.  And Miss Barton also seems to have designs on Elizabeth, though this is perhaps more of an attraction that she suppresses.  Finally, in the house, and anywhere Elizabeth can find a mirror, is Frances, a woman who appears when Elizabeth should be seeing her own reflection.  Frances advises her, comforts her, educates her on her powers and history; Frances also, Elizabeth eventually realizes, comes to resemble Miss Barton.  Yet Miss Barton knows about Elizabeth's powers, and she disapproves.

Elizabeth is not a plot heavy book, which is a rarity in long-form horror fiction, and refreshing.  The relentless effect is one of discomfort and a casual malevolence -- there's a paucity of "likable" characters in this; in fact, save maybe Katherine and Keith (who is being warped by those around him -- hell, so is Katherine) and the Taylors, the family servants, everybody is thoroughly appalling.  Though the characters are vivid, it's true that some of them, such as Miss Barton, feel like entirely fictional creations -- Miss Barton may be believable within the world of Elizabeth (which is all she needs to be, of course), but not so much out of it.  On the other hand, it's quite psychologically acute, and damning, when it comes to James, a hateful man to whom, Elizabeth tells us, the number and appearance of women around him is a subject of much concern and interest.  Few things seem to matter to him more than this.  "James felt about the Don Juan legend the way a priest feels about the New Testament," Elizabeth says, and while James may be an extreme, almost modern Gothic example, if you've never met a man like him then I think maybe you've never stepped outside, and Greenhall's depiction of the type is a powerful evisceration.

This short novel does eventually kick a real plot into gear, the catalyst being the disappearance of Martha, the grandmother.  Is one of Elizabeth's spells the cause, or is it something else?  So it's sort of a horror-mystery, though Greenhall seems not entirely invested in hiding the solution, which, in this particular case, fits my preference.  Still, this plot also serves to reveal some specifics about what Elizabeth is and why she's like this, and while nothing about this stuff is bad, exactly, it's less successful, or anyway less absorbing, than the loose, almost unstructured maliciousness of what preceded it.  But the ending of Elizabeth, the meaning of which took a little while to sink in, is absolutely horrifying for all sorts of reasons, and couldn't have existed without everything, the early strolls through human evil, and the witchcraft murder mystery plot that finally takes over.

Elizabeth is nastier than most modern horror novels allow themselves to be.  Many times, it seems that when a horror writer stretches a story to book-length that, in short form, might have logically ended with a kick in the teeth, that kick may happen two-thirds of the way through, and some form of bounce back towards the light is deemed necessary.  This is a broad criticism with a host of exceptions scattered around it, but I see it a lot.  Elizabeth, and other novels from what I guess we might term the Early Modern Era of Horror Fiction, exhibits no such compulsion on the part of the author.  It still ends with a kick in the teeth.  And then another.
Posted by bill r. at 10:14 PM

Definitely don't see artwork like that on paperbacks anymore. Even if the book were no good I'd probably pick up a copy for the cover alone.

ELIZABETH is truly one of the most intriguing and... seductively creepy horror novels I've ever read! Your point about using a female pseudonym to lessen the "skeeve" I think is a good one.

As for HELL HOUND, be diligent in your search for a copy: after nearly 2 years of seeing it for the prices you note (and higher) I actually found one on Abebooks for ONE DOLLAR. The shipping cost more! One of the luckiest finds I've ever had. BAXTER I thought was okay, intriguing premise, but I'm looking forward to the novel and honestly expect a lot after ELIZABETH.

Well, I don't mind a plain old house, even a few trees around the place. An unpeopled landscape can summon a pleasantly spooky mood, if presented well.

Way worse to me is the cliché of the hip, soulful 20-something protagonist (or whatever) posing just off center, gazing out moodily as if lost in contemplation of what distant scenes of vampiric romance and lusty zombie-slaughter, who can say.