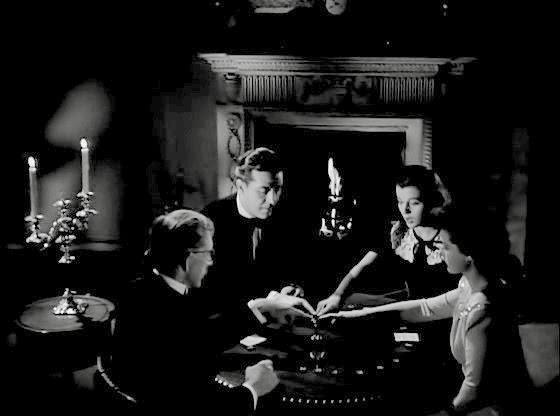 Ray Milland, I'd say, is exactly what The Uninvited needed.  This is not to say that the film, which has just been released by Criterion, didn't also need Ruth Hussey, Donald Crisp, Cornelia Otis Skinner, and Gail Russell, or screenwriters Dodie Smith and Frank Partos, or cinematographer Charles Lang, Jr., or director Lewis Allen, or, one might say especially, Dorothy Macardle's original novel (about which Richard Harland Smith wrote on this very blog earlier today).  It's just that Ray Milland was so easily charming, had about him such an unassuming depth that could translate as strength or wit or despair so seamlessly, that he could walk on screen and make an audience think "Yes, I believe this because I believe him."

This goes beyond plot details or the general premise of a given film -- since we're talking specifically about The Uninvited here, I'll point out that this 1944 horror film (a rather harsh term, seemingly, for what is mostly a very light movie, but it gets there eventually) has a premise that is as classic as the genre itself, and plot details that unspool in a manner that by now is the very essence of the modern ghost story.  But while the film is praised most commonly praised, and with complete justification, for its ominous and Gregg Toland-esque shadowy photography, the hurdle it must clear is that of tone.  The Uninvited begins as an almost screwball comedy.  Its depiction, in the early going, of Roderick Fitzgerald (Milland) and his sister Pamela Fitzgerald (Hussey) moving into a massive -- and suspiciously cheap -- new house on the cliffs of Cornwall is filled with the kind of airy humor that 1940s American and British films excelled at, except in most of those once struck, that was the tone throughout, because that was the kind of movie they were (that sounds dismissive, but it's not meant to be).  The Uninvited is playing a rather different game altogether.

The plot is simple, and will be dispensed with here simply:  the house is sold to the Fitzgeralds by Commander Beech (Crisp) for so little because due to a somewhat eerie reputation which he insists is the result of gossip, and because his granddaughter Stella (Russell) needs, for her own good, to have ties with the house cut for her.  Because gossip or not, Stella's mother did die there, evidently throwing herself from the cliff.  The place holds a power over Stella that her grandfather doesn't like, and which draws her back into the Fitzgerald's orbit -- the smitten Roderick's especially -- even after they've purchased the house fair and square.  And of course the house is haunted, but in a way that allows for a great deal of humor, and to even heighten the budding romance between Roderick and Stella.  It makes everything, as a matter of fact, Romantic, the capital "R" kind, and almost sweetly mysterious.  This is due in no small part to Gail Russell's wide-eyed and innocent performance, but the cliffs, the pleasant Cornish village that completes the film's landscape, and jokey bickering of Roderick and Pamela...mother's suicide or not, it's all rather sweet and funny.

Not to give anybody whiplash as far as cinematic comparisons go, but I remember after the release of The Blair Witch Project, either Daniel Myrick or Eduardo Sanchez, the makers of that film, responded to a question about that film's early humor by saying that they knew if they could get people laughing at the beginning, then they, Sanchez and Myrick, knew they'd have the audience right where they wanted them once the laughter stopped.  The Uninvited is not The Blair Witch Project, but while it always revs back up again, the laughter in The Uninvited does stop, and what Lewis Allen needed was an actor -- a cast, really, but most crucially his lead actor -- who could keep the film on a level where those tonal shifts would never jolt too hard.  The mystery plot -- and most 20th century ghost stories are mystery stories at heart -- is actually quite grim, and that grimness does blur into the main action at times; good people die, the ghost becomes malevolent, madness and obsession are introduced.  But always there is Ray Milland.  Ruth Hussey, too, who I must admit is no small part of this, but I know Milland's other work better, and am therefore better able to see how his presence in films functions.  In The Uninvited, he's an urbane everyman, which is a rare thing (you could maybe say Cary Grant was capable of this, and yes, he could certainly play it as well or better than anybody, but his Cary Grant-ness, which hurt nothing, nevertheless blots out any shot at his being an everyman), who, if you wanted to complain about it, you could say is maybe too perfect:  he's funny, talented, smart, charming, and a courageous man of action.  But Ray Milland never plays perfection, he just falls in step with, not so much the role, maybe, but the script.  Character is action, and Milland played the action, without airs.

You can see his unique talents work in a different way in another genre classic, Roger Corman's X - The Man with X-Ray Eyes, where everything I've said about Milland above is shown to collapse and come apart in a Richard Matheson-style tragedy.  He's just what that movie needed, as well.  Both the Corman film and The Uninvited are entirely terrific in all the pieces that surround Milland (quick note:  in The Uninvited, Cornelia Otis Skinner gives a performance that at first seems iffy, but makes a great deal more sense the more you learn about her character), but it's Milland that's able to collect it all and keep it together.  "The glue," they used to call such people.  That's Ray Milland.
Posted by bill r. at 9:02 PM