Blu-Ray Round-Up: The Stranger, The Hitch-Hiker, and Night Tide

On Tuesday, Kino Lorber is releasing three films on Blu-ray each of which has to count as kind of a big deal. In fact, two of them are part of Kino's Library of Congress line of films preserved by that august institution, so this isn't chickenfeed, you guys. But let use waste not another second. 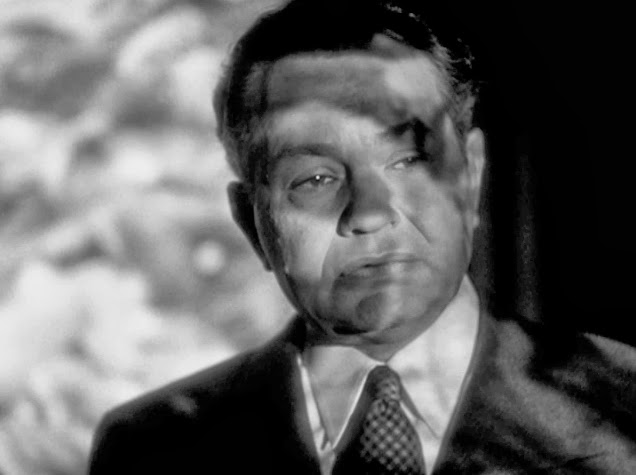 The Stranger (d. Orson Welles) - There are films directed by Orson Welles that are actually rather hard to see that get talked up more than this one, Welles's third film (strictly speaking), which has always seemed to be around somewhere.  And it's not that, say, Chimes at Midnight doesn't deserve to dominate the conversation, but it does mean that The Stranger also doesn't deserve to be buried.  I saw this first years ago, when I was even dumber than I am now, and I can't say this post-war thriller about a never-say-die Nazi (Welles) hiding within a normal life as a professor engaged to Loretta Young in the small town of Harper, CT, clicked the way I hoped it would, but this time around?  I'll tell you what, it worked.  Even the ending, which as a pay-off to the suspense is a bit broad -- Welles himself compared it unfavorably to Dick Tracy -- works simply because it's so well done.  It's as well done, in its way, as the should-be classic scene with Edward G. Robinson and Konstantin Shayne in the dark, empty gym, an everyday setting turned sinister by shadows and one man's motivation.

But The Stranger is really strong, top to bottom.  It's a tight and exciting movie, full of good bits and performances.  Welles himself is terrific, if occasionally a little bug-eyed, as the villain, who delivers a great speech at a dinner party that, knowing who he really is as we do, sounds like a threat:  "This is how far you'll be forced to go to beat us."  Edward G. Robinson plays the detective on his scent, bringing his typically winning, quietly smarter than everybody else, kind of way he had with this kind of role.  On the innocent-citizen side of things Billy House is effortlessly wonderful as the owner of the neighborhood drugstore, who has a sideline as a checkers shark.  I also loved Loretta Young here, and the way the character was written. Typically, a character like hers would be easily swayed by Robinson's evidence, but in reality I think most people would find themselves horribly conflicted, as Young is here.  She may do the right thing, but it's no easy choice.  An excellent piece of work, all around. 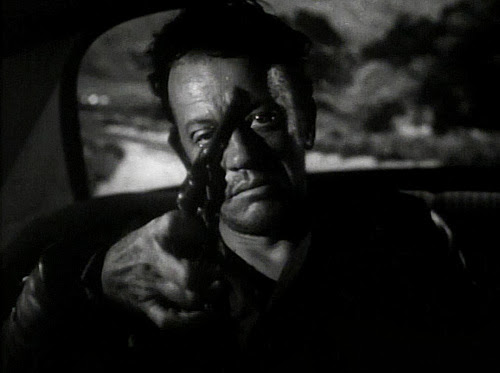 The Hitch-Hiker (d. Ida Lupino) - This 1953 film has the distinction of being the first film noir directed by a woman, a fact that wouldn't mean a great deal to me if it wasn't any good.  But to paraphrase John Self, the The Hitch-Hiker isn't just any good -- it's many good.  It's a simple story (based on fact) about a psychopath named Emmett Myers, played with a great deal of high-quality vileness by William Talman, tearing through a killing spree near the US/Mexican border.  He hijacks a car carrying two friends played by Edmond O'Brien and Frank Lovejoy, who are trying to get in a secret fishing trip without their wives knowing.  As a result, their seeming disappearance from where they're supposed to be, paired with Myers' crimes, the authorities believe the three are traveling together.  The changing reports of what the authorities believe leaves the innocent men's safety, at the hands of the bloodthirsty Myers, a moment-to-moment question.

At just about 70 minutes, Lupino and uncredited screenwriter Daniel Mainwaring (who also wrote the classic Out of the Past) waste no time in telling their story, though nothing feels sped along due to budget restraints or anything else.  Just over an hour turns out to be plenty, in fact, and there's time even to capture the boredom of Lovejoy and O'Brien's situation, when it's not terrifying.  Curiously, The Hitch-Hiker reminded me of The Prowler, not because, shared genre aside, the two films have much in common in terms of plot, which they don't, but because of the barrenness of the landscape.  The Hitch-Hiker takes place in a near-desert environment, not at all unlike the place where the doom-filled last act of that great Joseph Losey film plays out.  Film noir is known for, among other things, using the jumble and height of cities to beat down its heroes and anti-heroes, but others (see also Jacques Tourneur's Nightfall, one of many) achieve the same effect with almost no people and flat, skyline-free plains.  At least in The Set-Up, even when things are looking pretty bad, in theory Robert Ryan could still pop in somewhere for a beer.  In The Hitch-Hiker, that's not possible.  It's just you, the dirt, the road, and the guy with the gun. 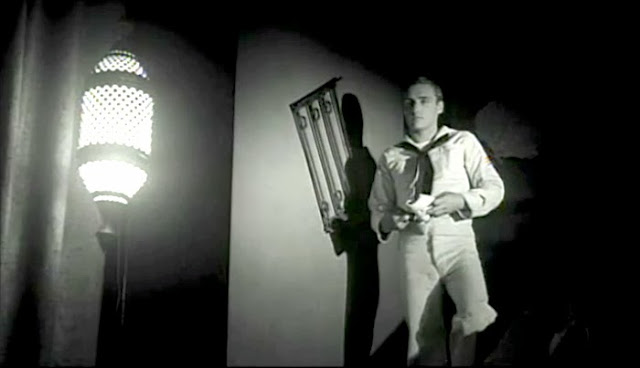 Night Tide (d. Curtis Harrington) - Finally we have this moody horror film starring a young Dennis Hopper as a sailor named Johnny Drake who is on leave in Florida, alone, wandering through an oceanfront carnival town.  There he meets Mora (Linda Lawson), who plays the mermaid in the carnival's midway, under the supervision of barker and her surrogate father Captain Murdock (Gavin Muir).  Drake falls in love with Mora, and apparently she with him, and he holds on to this feeling even in the face of rumors that Mora murdered her last two boyfriends, and that she might actually be a real mermaid.

The film was written and directed by Curtis Harrington, who, despite his early roots in the avant garde, or maybe because of them, had a very interesting career as a genre director, leaving behind a filmography that should be longer.  Night Tide was his first full-length feature, and it actually predates the more famous horror movie it most closely resembles, Herk Harvey's Carnival of Souls, which was released a year later.  But both have that wet, washed-out, dishwater black and white look, and each share the same eerie drift in their pacing.  If the composition of Harvey's film could occasionally evoke Ingmar Bergman, Night Tide is a little bit more pulp in its design, but Johnny Drake's dream of making love to a woman who transforms into a mass of tentacles would certainly appeal to the avant gardist in Harrington.  If The Hitch-Hiker is very tightly put together, Night Tide could be accused of slackness if the viewer isn't on its wavelength, but who wouldn't be on this wavelength?  People sometimes say of older films "They sure don't make 'em like this anymore," when, in fact, they do still make 'em like that sometimes -- it's just a thing to say, a way to express their affection for that particular movie.  Night Tide is really and genuinely, no shit, the kind of film they don't make anymore.  Anyway, it's interesting to see how innocent Dennis Hopper, that least innocent of actors, was capable of pretending to be.
Posted by bill r. at 8:21 PM