The Kind of Face You Slash - Day 23: The Way it All Started 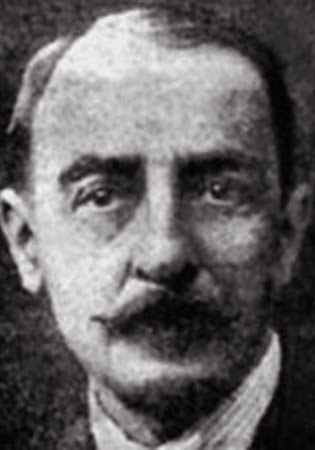 How do you go approach the task of writing about somebody who has essentially disappeared?  Very carefully! [Laughter].  No, but I don't know.  And by disappeared, I should say that I mean his biography has disappeared.  The writer I'm talking about is Maurice Level, who, while some of his work has survived, who he was has faded into less than mist.  In his introduction to Tales of the Grand Guignol, a collection of several Level short stories and two of his novels, editor S. T. Joshi writes:

...Level is a virtually unknown quantity.  He does not appear in any English-language dictionaries or encyclopedias of French literature -- and, incredibly, does not appear even in multi-volume and presumably authoritative French encyclopedias of French literature.  Not a single article has been published about him in an academic journal, and the most basic features of his life are unknown.  All we have is his work.

This despite the fact that, as the collection's title indicates, Level was an important contributor to the Grand Guignol, the famous French theater that specialized in short, bloody, salacious plays of horror and violence that was founded in 1897 and didn't shut its doors for good until 1962.  Most horror fans would readily admit to wishing something like the Grand Guignol still existed, and God knows I do, though my great fear about someone trying to revitalize the idea now is that it would be drenched in winks and irony.  Thanks, but no thanks (okay, I'd still go).  This isn't necessarily to imply that the Grand Guignol performances always took themselves completely seriously -- I don't know -- and by the early 60s it wouldn't shock me to learn that some amount of smirk had found its way in, but I've now read about ten of Maurice Level's short stories and while they certainly contain their share of dramatic irony, the "don't worry, this is all a joke" variety has been completely absent.

As a matter of fact, Level seems to have been a writer of great sincerity.  Two of the stories I read, "The Little Soldier" and "The Great Scene" are not horror, and don't belong to any genre that springs to mind when we hear the word.  Both are about World War I -- "The Little Soldier" is a sad story about a woman's tragic encounter with a noble young veteran, and "The Great Scene," which takes place in the theater world, deals with grief, and how it's expressed, among those at home who lose loved ones to war.  I should say here that most of Level's stories are quite short, and it's interesting how little Level needs to give the reader to achieve the desired effect, especially in "The Great Scene."  That story has the structure of a joke, and nearly has the brevity of one, though the punchline here has a quite different goal, of course.  Lots of classic horror stories, particularly pulp-era ones by the likes of Robert Bloch and so forth, could be said to take on the structure of jokes in their wind-up (Bloch's "She was decorating the tree," for example) but most of those don't get right down to business the way Level's do.  Another war story I read, called "At the Movies," about a widow -- her husband has gone MIA and is presumed dead -- who takes her child to the movies, has a similar build, though where it's going quickly becomes predictable.  Even so, the shape that predictable moment takes is unexpected, and even nasty, to the degree that even though I couldn't argue that "At the Movies" is a horror story, it's certainly horrifying.  Level comes across as quite vehemently patriotic in this group of stories, and "At the Movies" contains not a little bit of anger.

Other stories, like "The Test" and "The Debt Collector" (this last, at ten pages, is on the long-ish side for Level) fail to be horror, though here a more horror-like grimness gets a look in.  None of the stories I read for today contained a supernatural element -- as I understand it, a not uncommon aspect of Grand Guignol plays, several of which Level wrote, or had stories adapted into -- but the moral failings of his characters, or the extremes to which their minds takes them, can tip the scales from, say, A Simple Plan to Psycho.  "The Test" is a very simple story -- or, really, it's just a scene -- of guilt, but the closing imagery evokes Poe in an oblique but unmistakable way.  "The Debt Collector," meanwhile, is as close to a straight joke as I've read by Level.  It's the story of Ravenot, a bank employee who does the titular job, a man utterly beyond reproach until the day he steals 200,000 francs.  The upshot of the story, which details his extraordinarily practical plans, is that it's a very grim sort of O. Henry tale that was finally so goddamn familiar to me that I don't know if I'd read it before or if someone else ripped it off.  I'm not going to waste your time with this, but it's driving me absolutely bonkers.

Things begin to drift further into horror with a series of stories that revolve around corpses -- female corpses, specifically. though if anything can be read into this I don't know what it is (Level clearly disapproves).  One very short story, "In the Light of the Red Lamp," is horrific in what it implies about how the main character will function after the last line, but other, longer stories, flesh things out a bit more.  "The Horror on the Night Express" is a mystery story about four people, strangers, on a light night train who begin discussing a notorious murder.  One of them happened to be the doctor who performed the autopsy on the victim, and he functions, sort of, as the detective.  Because if one of these other characters isn't the killer, against all odds, then why is this story being told?  If "The Horror on the Night Express" crosses into horror, it's because of one final act that could only occur because the mind of one character is perhaps capable of anything.  It's a story about the process of detection, and of elimination, and of noting character behavior, but its finale is an act of madness.

The longest story in the collection, other than the two novels also included, is "Thirty Hours with a Corpse."  This story was written in the 1930s, and reminded me immediately of the 1924 thrill-killing committed by Leopold and Loeb, though it reminded me of that only by reminding me of Alfred Hitchcock's 1948 Leopold and Loeb-inspired film Rope, which itself was based on a play written in 1929 by Patrick Hamilton.  So if anybody borrowed from anybody, Level borrowed from Hamilton, but while in Level's story you have two young students who have killed someone and stuffed the body in a trunk that is in a room through which various characters walk, the "thrill-killing" nature of the real case, and that added the sharpest chill to the Hamilton and Hitchcock pieces, is absent.  So that's not the motive, and on top of that although one of Level's characters believes himself to be closer to John Dall, both are really Farley Granger.  This adds a sweaty desperation to the proceedings, something the arrogant coolness of Dall in the Hitchcock film does much to uneasily suppress.  What "Thirty Hours with a Corpse" achieves is quite plainly charting the mental breakdown of two, or maybe just one, suddenly vicious and guilty men.

"Quite plainly" is a good description of of Level's prose, a style that works best in my favorite story, the four-page "A Maniac."  I was reading an interview with the French crime writer ("A gross simplification!" many will shout, and maybe, maybe not, depends on if you like crime fiction as much as I do) Georges Simenon in The Paris Review, and in it Simenon talks about working obsessively to remove anything artful from his prose.  It was vital to him that his writing be as plainspoken as he could make it (it's a fascinating interview, you should read it) so that, in essence, he could communicate as well as he could what he desperately wanted to communicate.  Simenon took his writing about as seriously as any writer ever has, and it's impossible for me to know if Maurice Level approached his work with anywhere close to the same amount of passion, or if his own simple prose was the result of an artistic philosophy.  But Level communicates something with "A Maniac," perhaps the only story I read for today that belongs unambiguously to the horror genre.  What he communicates is perhaps rather more sensational than anything Simenon was after, but he does communicate a psychology that I could have assumed existed in 1920s France without reading "A Maniac," but it also speaks to a very specific thing that I see quite frequently today, the same thing, I should say, the same impulse and desire Level's maniac pursues, except that now it's barely hidden from view by those who share it.  It's almost become part of the culture.  "A Maniac" is four pages long, as I've said, and it's, in my view and in its admittedly modest way, quite excellent, so why ruin it?  But it takes a look at a form of sociopath about whom it's so great that we can joke about now, and follows this man and his interests to their logical conclusion.  And no jury in the world would convict him.
Posted by bill r. at 7:40 AM