The Kind of Face You Slash - Day 24: First the Weeping, and Then the Cold 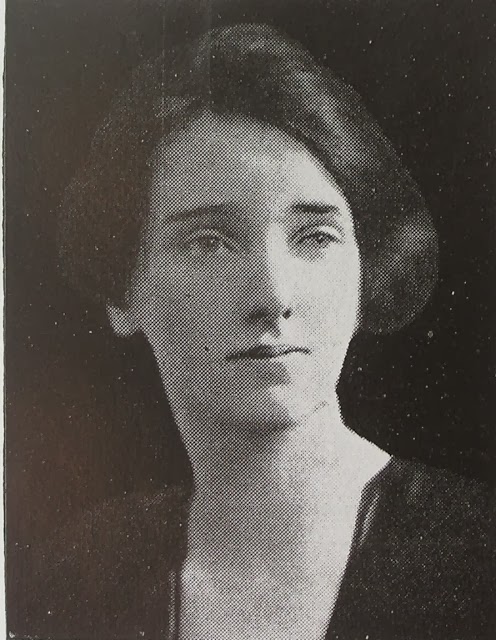 Though the same was likely not true in her lifetime, there appears to be but a single existing photograph of Dorothy Macardle half a century after her death – which is all too fitting for the author of a classic ghost story in which the portrait of a dead woman figures with fateful prominence. Macardle’s 1941 novel Uneasy Freehold, which was published in America as The Uninvited and adapted for pictures in 1944 under that name, is the tale of a brother and sister in flight from the pressures and preoccupations of a pre-World War II London who buy an old house on the Cornwall coast, only to find themselves preoccupied by the previous occupants, the non-breathing variety. By whatever name you call it, The Uninvited (the alternate title has outlived the original) is such a breezy, agile, and witty chiller that you’d be well within your rights to presume that the author was a coolly unconcerned character, a lady writer of some means who was able, at her leisure, to craft deucedly charming tales between soirees and charity auctions, as many lady writers of means did in her day. But appearances, we are told time and again, can be deceiving.

Dorothy Macardle wrote few novels, though a comprehensive accounting of all her works is problematic for several reasons (more later). She came to novel writing late in life, after work in theatre, after teaching, after taking up journalism, after having served time in prison (more about that later). She was born on February 2, 1889 in Dundalk, County Louth, Ireland; Celtic country, midway between Belfast and Dublin. If you know anything about Macardle, you will appreciate that “midway” part, as she straddled throughout her life worlds in opposition to and at odds with one another. (Amusingly, or fatefully, she was born on a Wednesday.) Her Irish father, Sir Thomas Callan Macardle, was a prominent brewer (MacArdle’s Irish Ale is still available, albeit exclusively through Guinness) and a Roman Catholic; her mother, the former Minnie Ross, was an Englishwoman who had been baptized Anglican but converted at marriage to Catholicism, the faith in which Dorothy and her brothers were catechized. Dorothy Macardle enjoyed an affluent upbringing and education at Dublin’s Alexandra College (formerly Catholic University of Ireland), seemingly none the worse for the high church/low church schism at play within her family pew.

One of Macardle’s brothers was killed in World War I in 1916, at the Battle of the Somme. Bad enough on its own terms, the Great War divided the already fractious Irish State over the question of home rule; while many Republicans refused to support the war effort (and, by extension, the queen), others signed up, dying on battlefields halfway around the world or coming home broken, haunted by their time in the trenches. Macardle had already taken up the Republican cause, joining both the Cumann na Mban (a sort of IRA sisterhood, in sympathy and collusion with the anti-British “Irish Volunteers”) and the Gaelic League, one of the few pro-Irish organizations that afforded women equal standing and status alongside men. She would spend an inordinate amount of her lifetime fighting the British for independence and her own people to promote sexual equality. If you accept the long view of her life, she took a three-pronged approach to changing popular opinion: as an historian, she chronicled what had gone on, the history of the Civil War; as a journalist, she chronicled what was going on, the news of the day; and as a playwright/ novelist, she spun allegories by which she hoped to impart emotional truths that people were not predisposed to want to hear.

Around the time that her father received knighthood, Macardle was imprisoned for opposing a British-Irish treaty – one has to wonder about the tone of family conversation around the tea tray at that time, though visits home were likely at a premium. (Rumor has it that Dorothy Macardle did not get on with her mother – again, fascinating if you know her history or have read The Uninvited). The Black and Tans (British soldiers in the Royal Irish Constabulary) raided her flat in 1922 and carted her off to jail. She would serve time in both Mountjoy Prison and Kilmainham Gaol, where she began collecting the stories that would comprise Earth-Bound: Nine Stories of Ireland (published in 1924). All but one of these was touched with the supernatural, sloughing off the realism she had afforded her stage plays, to embrace the persuasive mechanics of parable. Macardle learned a lot from her fellow inmates (she dedicated each of the stories in the anthology to a specific friend) but understood the truths she learned behind bars needed to be smuggled out in another form. And what better camouflage to mule the truth of female subjugation to Ireland than Gothic fiction? 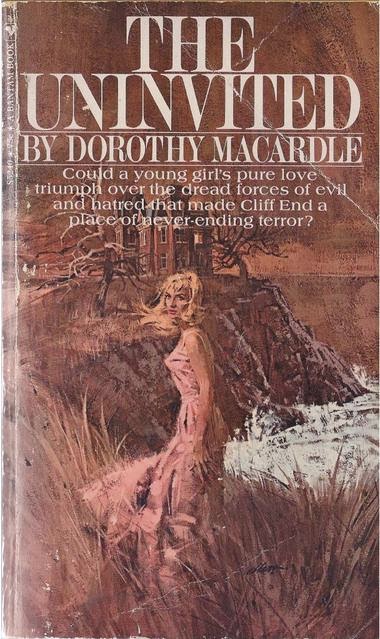 In The Uninvited, a brother and sister of Irish descent, Rod and Pamela Fitzgerald, quit London for a grand but gloomy manor set on a Cornish cliffside. They are able to buy the place for a song from a retired military man, whose daughter died there many years earlier, and who raises his orphaned granddaughter in the village. The Fitzgeralds take a liking to the granddaughter, Stella, and invite her to visit them. Sensitive by nature, the girl perceives a presence in the house, an entity that is by turns nurturing and malicious, one that she comes to believe is, in its maddening inconsistencies, the spirit of her late mother. I won’t spoil the reveal of the book or its excellent Hollywood adaptation because I want to address something that fell between the cracks of adaptation – namely the novel’s treatment of the Irish by the British and the ways in which the author tacitly criticized her own countrymen, specifically those who did not keep faith in upholding the rights of women alongside those of men. Though Macardle had by this point written her magnum opus, The Irish Republic: A Documented Chronicle of the Anglo-Irish Conflict and the Partitioning of Ireland, with a Detailed Account of the Period 1916-1923, and characterized herself as “a propagandist, unrepentant and unashamed,” she held lingering doubts about the New Ireland and its relegation of women to the role of mother, best fit for nurturing the next generation of Irish nationalists.

The ghostly business notwithstanding, some of the best bits in The Uninvited hang on the Commander (as Stella’s grandfather is called) and his discomfiture at discussion of anything Irish. When Pamela inquires “Is there a Celtic strain in North Devon?” the Commander snaps “None! … The Welsh are an entirely different race.” When Pamela broaches the subject of the Fitzgerald family ancestress, wife of a celebrated Irish patriot, the Commander brushes her off by claiming “I am afraid that I am not well acquainted with Irish rebel history,” evincing a distaste for the subject that he might otherwise reserve for spanking literature or Negroana. The delineation of character by nationality is thus established. The Irish Fitzgeralds are etched as passionate, caring, artistic, and progressive while the English Commander is branded fearful, chauvinistic, inflexible, and intractable. Caught in the middle is Stella who, we find out, is of mixed heritage and is as such perfectly poised to straddle these seemingly incompatible worlds and the gulf between the living and the dead.

By its conclusion (a literal cliffhanger), The Uninvited asserts itself as a reckoning, an establishment of truth over myth (Macardle’s former allies were reportedly uncomfortable with the final revelation and its reflection on Mother Ireland), while also using the model of a woman and the mother lost to her as a metaphor for an essential mourning that Macardle (who opined the encroaching conservatism of her own country) felt all too keenly. (One biographer described the author’s relationship to her own mother as “unharmonious,” a word that evokes the spiritualist movement of the late 19th and early 20th centuries – a vogue that accelerated apace, at least for a while, with the women’s rights movement.) All this is missing from Lewis Allen’s otherwise very fine film adaptation, released by Paramount Pictures in February 1944 with Ray Milland and Ruth Hussey playing the Fitzgeralds (Rod having been rechristened Rick), Donald Crisp as the fussy Commander Beech (Brooke in the novel), and Gail Russell as Stella. I don’t blame Lewis, or his screenwriters Frank Partos and Dodie Smith, for leaving out the racial subtext, which would have limited the film’s appeal. As it stands, the film is a delightful (and not infrequently creepy) confection that supports the novel’s main arguments in a basic way while also inviting the curious to check out its source – and well they should.

Dorothy Macardle died of cancer in Drogheda in 1958. At the time of her passing, she had completed two more novels, The Unforeseen (published in 1946) and Dark Enchantment (1953), both of which centered on sensitive, inquiring females in strange and fearful situations. A theatre fire in 1951 had destroyed some of her dramatic works (the Black and Tans had done as much for a considerable portion of her political writing at the time of her 1922 arrest) and after her death Macardle’s surviving brother, his reasoning apparently lost to time, burned her papers. Only a portion of what she accomplished in her three-score and nine years survives – her published works, her history of the Irish Civil War, some plays, three novels… and a single picture. This photograph depicts a dark-haired, serious young woman, her lips pressed tight with steely resolve, her eyes set on an uncertain but unavoidable future, unblinking, unwavering, and unafraid.
----------------------
Richard Harland Smith has been a book and film critic for Video Watchdog magazine since 1999 and a contributing writer for Turner Classic Movies since 2006. A longtime writer of supplemental material for such DVD companies as Anchor Bay Entertainment, No Shame Films, Severin Films, Dark Sky Films, and Synapse Films, he has also contributed to the books Contemporary North American Film Directors: A Wallflower Critical Guide, Contemporary British and Irish Film Directors: A Wallflower Critical Guide, The Book of Lists: Horror, "Hey Kids, Comics!" True Life Tales from the Spinner-Rack, and Vampiros and Monstruos: The Mexican Horror Film of the 20th Century. He blogs weekly at The Movie Morlocks, the official film blog of Turner Classic Movies, and lives in Los Angeles, California, with his wife and children.
Posted by bill r. at 9:00 AM