The Kind of Face You Slash - Day 10: Damned Fool Men with Their Maggoty Ideas

As with many of Ray Bradbury’s stories, “There Was an Old Woman” combines supernatural elements with a matter-of-fact, Midwestern kind of pragmatism that often veers into deadpan comedy. First published in Weird Tales in June 1944, it’s the story of Aunt Tildy, an elderly spinster who finds herself visited by Death as the story begins. Aunt Tildy, as she’ll explain at great length, resolved long ago that death was a foolish, unnecessary act, and she has no intention of dying herself. It’s an effective little dark comedy because it begins with an inarguably logical idea - death should be avoided if possible - and follows its protagonist’s determination to do just that to morbidly hilarious lengths.

The story begins with Aunt Tildy already arguing with the visitor in her living room:

"No, there's no lief arguin'. I got my mind fixed. Run along with your silly wicker basket. Land, where you ever get notions like that? You just skit out of here; don't bother me, I got my tattin' and knittin' to do, and no never minds about tall, dark gentlemen with fangled ideas."

Much of the first half of the story is made up of dialogue like this, as Aunt Tildy makes her case to the visitor that she has no intention of going in his “silly wicker basket.” Her visitor is described, repeatedly and simply, as a “tall, dark young man.” He never tried to persuade Aunt Tildy to get in his basket, or speaks at all. Perhaps he realizes that there’s just no arguing with her. He merely stands in the corner, listening as she tells him about the comforters she needs to make, the death of her parents and sister, and the teenage niece, Emily, who has lived with her since her mother’s death and is the only person Tildy’s really close to. As it becomes clear that Tildy’s determination not to be touched by the pain of loss has kept her from experiencing much of life, the tall, dark young man seemingly serves as a reflection of the old woman’s loneliness without ever saying a word: 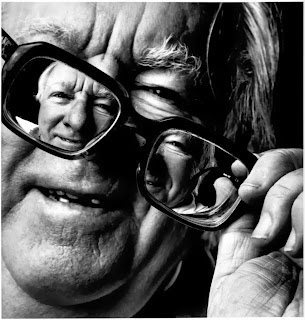 He seemed to know everything, with the dark, cold shining of his eyes, before she opened her mouth. He knew about her and World War II, when she shut off her radio forever and stopped the newspapers and beat a man's head with an umbrella, driving him from her shop when he insisted on describing the invasion beaches and the long, slow tides of the dead drifting under the silent urgings of the moon.

Midway through the story, Aunt Tildy drifts into unconsciousness in the middle of an anecdote - the visitor has literally allowed the woman to talk herself to death. The second half turns more broadly comic, as she struggles to convince her terrified niece that she’s still alive, then goes to the mortuary where her body is about to be prepared and convinces the mortuary president to give it back (the man seems more concerned at the possible loss of business from Tildy’s threats to haunt the funeral parlor than he is about the fact that he’s talking to a ghost). Tildy reminds the reader a bit of Gregor Samsa, as both are determined to not let the considerable changes they’ve undergone prevent them from going on with business as usual. I’ve never thought of Bradbury as Kafkaesque, but they do both have a knack for combining extraordinary story developments with the mundane details of everyday life. The ending of “There Was an Old Woman,” then, is a perversely happy one, as Tildy finds herself free to continue the life she’s fought for, never stopping to consider that, as she’s literally experienced proof of a life after death, that the eternity she’s rejected might be of more interest than the very small life she’s clinging to.

Bradbury’s story has been adapted for CBS Radio Mystery Theater, an episode of Ray Bradbury Theater and, most interestingly, an issue of Tales From the Crypt. It’s fun to see Bradbury’s story told through the comic’s trademark garish character designs and sickly color palette. At the same time, by turning Tildy into a ghoulish old crone, Bradbury’s matter-of-fact approach to the story is lost in translation. It’s his ability to coach the genre’s trappings in everyday, universal terms that is one of the strongest qualities of Bradbury’s writing - horror can take the form of a spectral, soul-stealing carnival, or it can be as simple as a middle-aged man realizing he’s too old to keep up with his adolescent son. And a stubborn old spinster can dig her heels in and cheat death because there are still many more comforters and pot holders yet to be made.
----------------------------------
Andrew Bemis writes about movies at his blog Cinevistaramascope, and has also contributed to If Charlie Parker Was a Gunslinger, There'd Be a Lot of Dead Copycats, Samurai Dreams, and The North Adams Transcript. He's also the writer/director of the film Black Light, starring AVN Award winner Bella Vendetta. He lives in New Hampshire with his family.
Posted by bill r. at 10:00 AM

I'm not sure this story really clicks with that particular Kafka, though. Samsa's condition makes no sense and seemingly comes out of nowhere, and the world, including those he loves, is increasingly turned against him. Tildy, on the other hand, is an old woman faced with the prospect of a natural death, which she resists desperately, with strange and unnatural results, and then goes on unfazed by her condition or its effect on the people around her. Whereas the world becomes a burden to Kafka's protagonist, it might be that the opposite is true of Bradbury's.

The reminder, for me, was a very specific one, in that both find themselves in an unnatural state (though Tildy's death is natural, being a ghost is arguably not) and try, at least initially, to carry on with business as usual. As I wrote, I wouldn't go so far as to call the story "Kafkaesque," but Tildy's doggedness did remind me of Samsa.