The Kind of Face You Slash - Day 20: Screaming Inside 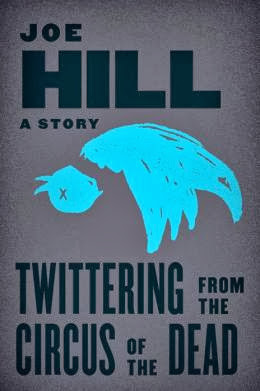 Sometimes horror needs to be convenient. The mouldering books on the shelves of the secondhand bookstore are just too far away. Maybe I'm having a boring day at work and need a quick scare to get me to five o'clock. Perhaps I just don't feel like investing the time or cash in yet another novel that turns out bland. Short stories in Kindle format can fit the bill in this case. They're available to view on pretty much anything with a glowing screen, and the ones reviewed here range in price from a buck down to free.

Joe Hill's "Twittering From the Circus of the Dead" tells the story of a typical grumpy teenager on a family trip. As the title suggests, the story is told in tweets. Hill's take on the teenage voice rings true, and he avoids the feel of gimmickry one might expect in writing a story via twitter updates. Setting things up with a believable family dynamic, he could almost cut things short and leave it as a satisfying coming of age tale. Instead, his grasp of the everyday makes it easier to accept the weirdness that follows. Things go to hell in a way that could probably support at least two other interesting stories. These ideas end up well integrated here in a way that serves the final payoff. I first checked out Joe Hill by reading his excellent short story collection "20th Century Ghosts", and this short could almost be a late addition to that book. Aside from his solid technique, these works share Hill's gift for surprise. Occasionally in his stories I'll find myself in a state of wonder, like when I followed Lovecraft's narrator down the staircase in "The Rats in the Walls". I certainly found that sense of surprise here.

Next up is "Dead Pig Collector", an offering by Warren Ellis about a sort of combination hit man/cleaner. Like Harvey Keitel's Wolf character in Pulp Fiction, this enigmatic guy won't just leave your corpse hanging around after he's done the deed. He is quite meticulous and counts out his progress in seconds. From the airport to the hotel, through the various inevitable obstacles that interrupt his perfectionism and plans, he's always counting things down. Sometimes this hit man's quirks are interesting, and sometimes they leave the reader also counting down until the next interesting section. The horror angle is mostly contained in the cleanup aspect of things, and that's where I feel it could have used a bit more oomph. Ellis spends so much time making his character cool, aloof, and meticulous that not enough time is spent mucking around in the guts.

"Suspect Zero" is a recently released short story from Richard Kadrey, best known for his "Sandman Slim" series. If you've read those books, you know that Kadrey writes in a kitchen sink modern fantasy style, with his title character slipping in and out of Hell over the course of his stories. His description of Hell and its inhabitants is the selling point for me, and that sort of world building is absent from Suspect Zero. Instead we get a serial killers meeting cute kind of tale, which focuses on a junior killer seeking out the truck driving Grand Poobah of mass murder. It ends up reading like the Karate Kid of antisocial behavior, as the wise elder sociopath passes down his knowledge to the upstart. Kadrey really likes his characters in "Sandman Slim", and rarely kills them off even when it might serve the story. That disjointed mercy follows here, as does his proclivity for unexplained flourishes, such as the fortune telling runes in the senior killer's truck. There is an odd air of mystery and benevolence to the proceedings, with its iconic midwest diners and genial murderer monologues. It's hard to know whether Kadrey was thinking more of American Gods or Large Marge here.

"Serial" by Jack Kilborn and Blake Crouch. "Serial" is the modern bogeyman story stripped down to its most basic parts. Two working class psychos are separately trolling the roads for victims, one as a hitchhiker and the other posing as a friendly ride. Kilborn and Crouch quickly establish each character's nasty personality and method of operation, showing them dispatching one set of victims each before unwittingly reaching each other. Each character's standard method of killing is truly disturbing, yet also contains over the top cartoonish goofiness. While one killer is busy lacing a slurpee with debilitating opiates, the other is making sure his jalopy is in good enough shape to knock out its passenger with a quick stop. The grit and detail of the story leaves one with the impression of Michael Rooker's Henry taking on Mallory Knox in a semi slapstick sort of universe. Though occasionally trite, "Serial" remains satisfying by cutting out all the unnecessary parts, leaving only two monsters reaching for each other's throats.
-------------------------
Peter Aldrich has enjoyed horror ever since he picked up Red Dragon as a kid, mistaking it for fantasy. You can sometimes find him playing guitar in the general area of Chapel Hill, NC. His album is on Silber Records. On his nights off you might also find him playing through Resident Evil, surrounded by his four cats.
Posted by bill r. at 9:44 AM