The Kind of Face You Slash - Day 12: Some Strange Form of Lesson 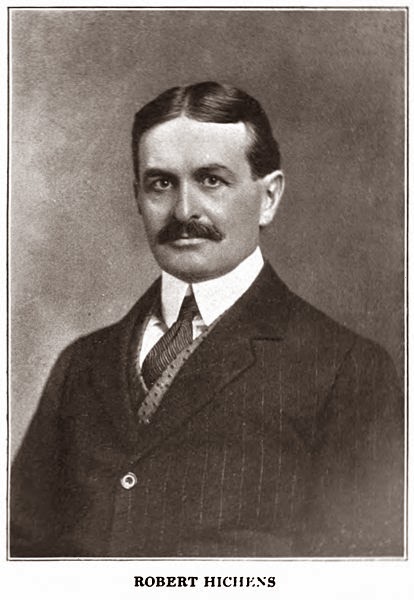 “To me the watchful eye of affection would be abominable.”
Thus speaks the soon-to-be-haunted fate-tempter at the center of that most British of horror shorts. Britisher than MR James, you sneer? James’ work follows a pattern: gray antiquarian descends upon gray English village and is menaced by something that generally touches him before it shows itself. It’s terrifying stuff, and the don’s headshot is on a first-class stamp for a reason.
But Robert Hichens’ “How Love Came to Professor Guildea,” his most read and heavily anthologized story from a colorful body of peculiarly Victorian exotica—his subjects included magical jewels, sexual insanity (in Egypt, no less) and morphine addiction—takes a rococo glee in extrapolating James’ template. What could be more unwelcome than being haunted by something sinister that finds clever ways to harrow a blameless man? For middle-aged bachelor intellectual, confirmed skeptic and rather pompous old maid in britches Guildea, the answer is being loved literally to death by a cretinous entity, and Hichens serves it up with a side dish of psychological vengeance. Typical horror protagonists don’t ask for or deserve their fate, but smug Guildea, with his goatee and his African gray parrot and his “science” (ptooey!) is begging for it. Why, Hichens builds it right into the title!
There is something supremely comforting in the structure of the story, which finds two men—Guildea and his guest, blue-eyed, beaming, squishily kindly Father Murchison—engaged in some gentlemanly jousting (not that kind, although “Both men were celibates” kicks off the third paragraph, so we know where we’re at) in the parlor. They are new friends, so there’s some philosophical probing on the subject of Murchison’s sermon on sympathy, which Guildea has attended for ironical purposes, because he’s kind of a dick like that. The talk turns from Guildea’s possession of the parrot to a cold-blooded assessment of his manservant, and it sets the tone for future conversations, broadly described but unrecorded. We the readers fumble toward an opinion of Guildea just as Dr. Wat—sorry—the good father does. One night, Murchison loads himself into his cassock and murmurs a word into the wind, unleashing insanity and ruin upon his friend.
Pity.
Oh, not intentionally, and it doesn’t even read as pivotal—this is a longish story, and you’ve got many pages to go. But Guildea has just countered Murchison’s observation that people often get what they want least by chortling that in his own case, that would mean being showered with affection. “Haha, Satan! I would love to play three-card monte with you,” he does not cry as he closes the door, but you get the idea.
If only the antagonist were clever Satan—“I could fight against a brain,” moans Guildea. Rather, it’s a bodiless, brainless entity, neither man, woman nor child, whom Guildea inadvertently picks up in a public park and brings home. The lovestruck menace promptly moves in and drives the professor mad by mewling and cooing and generally emitting waves of infatuation loathsome to their target. Guildea even entreats poor Murchison to hide behind an arras and see how the creature has trained the parrot to respond to invisible head-skritchies. And, because if you introduce a parrot in the first act, it must imitate something in the third, soon it’s babbling sentimental inanities at the professor as well. The thing kicks it up a notch, squeezing into bed with Guildea and nestling against him all spoony-like, whereupon the old celibate’s brain cracks in two.
Which brings us back to the opening conversation, in which both we and Murchison strain toward an understanding of the subject. For all the philosophical maundering in his story—the whole thing could reasonably be called a philosophical maunder—Hichens is a garrote-tight storyteller. Every seed is planted over the initial claret and club soda: the queer sexlessness, not just of the subsequent lover; the weird honesty in negotiations between Guildea and Murchison; Guildea’s pitiless dehumanizing of his servant; his hubris, of course; and Murchison’s power, as a man of God, to draw omniscient and judgmental eyes toward his friend’s emotional lacuna.
The question of Father Murchison’s agency remains a murky one at the end. “How Love Came to Professor Guildea” can be read as a prescient psychoanalytic study—the year was 1900—with some squishy woo-woo lurking in the corners. But it’s far too British for that, and too rigorous. It’s actually Guildea’s insistence upon his own emotional agency that seals his doom (there’s our old friend hubris. Hi!) Unseen powers above and below aren’t fond of being told to go screw by goatee-sporting mortals, and he is forced back in line in a most unforgiving manner.
G.K. Chesterton would not have been ashamed to come up with a story that so headily swirls the demonic with the divine in the mundane setting of a townhouse. Fortunately for us, a clergyman’s son got there first, and sketched an indelible portrait of a new kind of horror, one that filled our formerly safe spaces with shadow, leaving us nowhere to hide.
-----------------------------
Arion Berger was a journalist and critic for a hundred years before retiring to write full time. She has published numerous short stories in Black Clock and Gargoyle, and writes erotic romance novels under the name Lyra Byrnes between plugging away at a novel about Norwegian black metal. She has no blog or website because go away, she's working, but you're welcome to ogle her dirty book Made to Be Broken here at Ellora's Cave.
Posted by bill r. at 9:27 AM

This is a story I liked a lot on first reading it, years ago, but now don't remember well at all. Except for the parrot. Somehow or other I got the impression that the thing haunting Guildea was a dead girl, but whether that came from the story itself or from reading other opinions about the story, I can't say. Pshaw, it probably wouldn't make much difference to that smugly goateed prig anyway. And the dead are common as muck, besides.