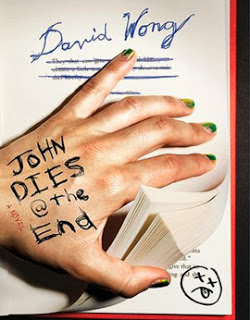 Oh yeah.  There's a movie of this book now, too (and probably a soundtrack album).
Honestly, I don’t remember if I first heard about JDaTE because of the film, which I haven’t seen. The man at the helm was Don Coscarelli, once most famous for the pulpy Phantasm series, now for Bubba Ho-Tep (partly hence the earlier mention). There is plenty of visceral horror on display in these pages, plenty of potential for visual gags, so from that point of view he’s probably a good choice; but it was the pervading bleakness that bubbled beneath everything that really made this book work for me, and I think that might be a big ask of a movie being sold off the back of a monster built from reanimated cold cuts. Some of it would transfer easily enough, as when David is asked why he believes in hell and replies “Because it’s the opposite of what I want to believe,” but unsurprisingly some of the most effecting passages--including the one that, in my opinion, sheds light on exactly why Wong picked that title--would demand a maudlin two hours of art house navel-gazing to convey on the silver screen. So let’s not do that. And while we’re on the subject of how not to fuck up perfectly good books when you want to make a movie out of them, why--
Welcome to freakdom, Dave. It’ll be time to start a website soon, where you’ll type out everything in one huge paragraph.
We try to laugh, but sometimes the truth hurts, doesn’t it? Now, if I don’t want to look like a freak, I’m going to have to sneak back up and break this bad boy into bite sized chunks.
Which is a bit like what happens to John, really.

---------------------------------------------------------------
Andrew Leon Hudson is an Englishman living in . Before taking up writing with intent, he had previously worked in such diverse industries as education, prosthetics make-up, narcotics retail, journalism, butchery and “the services” (customer and military). He once started a company with his parents which employed a few friends until it all fell apart. His first novel, The Glass Sealing, should be in all good ebookshops for Christmas, and he’ll probably mention this article on his pseudonymous blog, andrewleonhudson.wordpress.com
Posted by bill r. at 1:01 PM

The best mingling of comedy and horror, I figure, is the kind that doesn't fall neatly on one side or the other. The funniest parts of Return of the Living Dead come to mind: the tall gawky monster in the basement, equal parts wide-eyed goofiness and shambling horror; Burt struggling to play it cool as he offloads the twitching zombie parts on his mortician pal, Ernie. The movie's best laughs are played straight, and eventually, by the end, become almost indistinguishable from the horror.

As for this book, I can't say, although the flippantly humorous tone apparent in these brief excerpts seems a little ominous to me. It seems to me that, even at the risk of being accused of po-facedness, a horror story does have to take itself seriously to a certain degree in order to succeed as one. The impression I get here is a story that plays more like a parody of itself. Then again I was never a big fan of Evil Dead II, and this seems like a clearcut case of The Kind of Thing You'll Like, If You Like That Kind of Thing.