The Kind of Face You Slash - Day 21: Mutant Christ 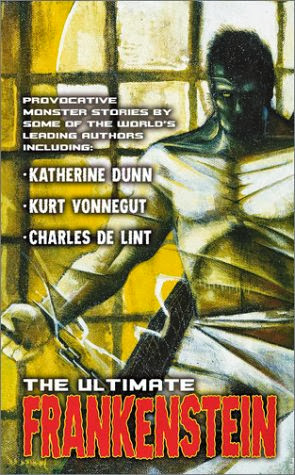 If I didn't restrict the subjects of my Kind of Face You Slash posts, unnecessarily, some might say, to only stories and novels that I'd never read before, by now I surely would have written about Frankenstein.  Oh, I've mentioned it in relation to other topics, but I've never dived in, and this is too bad as, along with various stories by Poe, Mary Shelley's novel is my favorite of the core classics of horror literature that have most shaped what came after -- I love it more than Dracula, more than The Strange Case of Dr. Jekyll & Mr. Hyde, more than The Phantom of the Opera, more than Lovecraft, and so on.  That story revolves around a singularly brilliant and timeless idea that Shelley examined in exactly the philosophical terms that fascinate me most.  That it's a wonderful story wonderfully told is perhaps not merely secondary.

The influence of Frankenstein is vast, though not in the same way these stories tend to be.  Dracula can influence in ways both specific and incidental.  The point is, you can write a vampire story set in 21st century Los Angeles that has been influenced by Bram Stoker's novel and not feel compelled to name your buttoned-up movie produce heroine Willy Harker ("Willy...short for Wilhelmina," etc.).  By and large, Frankenstein is unique in a way that doesn't quite allow for this, or at least a lot of writers seem to think that if they don't announce the influence in plain terms they will be accused of hiding their theft.  Hence, stories that grew from Shelley's story tend to be about Shelley's story in some way (or James Whale's films).  Anyway, I've said all this before, but I bring it up again because I have before me an anthology called The Ultimate Frankenstein, edited by Byron Preiss, which seems to want to prove me right.  Not every story, probably, but the two I read are enormously clear on the subject.

This is an interesting anthology, by the way.  Originally published in 1991, a fact which would seem to guarantee that the contents are comprised of a lot of splatterpunk nonsense and one story by Ramsey Campbell, the authors gathered together are actually rather varied.  Charles de Lint, Katherine Dunn, Philip Jose Farmer, Brian Aldiss...in fact you might infer from the inclusion of those last two that The Ultimate Frankenstein leans towards the science fiction of the science fiction/horror divide of Shelley's original.  And Isaac Asimov wrote the introduction!  (Before going on, I have to digress for a moment and point out that Leonard Wolf supplies "Selected Filmography" at the end of the book, all the films being Frankenstein in nature.  I have to note my irritation that Wolf cuts his praise of Young Frankenstein by bemoaning its "macho sexual humor," because whatever else that humor is, "macho" it isn't; similarly he softens his love for the original James Whale film by saying that Colin Clive's performance is "tortured and flaccid."  Now, for one thing, in the context of that film and that performance, "tortured" doesn't read as a detriment.  More importantly, if you examine Clive's work with the intention of rooting out flaws, you may come away with something, but the last word you'd use to describe it is "flaccid.") 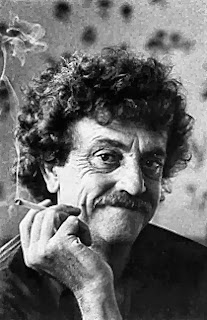 Of the two authors whose inclusion in The Ultimate Frankenstein interested me the most, it was Kurt Vonnegut who I thought would probably more directly hit on science fiction elements, possibly in a way that left horror out altogether, or near enough to not suit my purposes here.  But I read it anyway, because hey, Vonnegut.  The story is called "Fortitude," and it is, in fact, not a short story, but rather a screenplay for a short film.  I find this very odd.  "Fortitude" was first included not in one of Vonnegut's story collections, but rather in his classic essay collection Wampeters, Foma & Granfalloons.  In the preface to that book, Vonnegut refers to it only as the one fiction piece to be found there, and as "a screenplay for an unproduced science fiction film."  Very well, except it's only twenty pages, and I just find it odd, in an "Oh, that's interesting" kind of way, that a writer not otherwise intimately involved with filmmaking would write a script for a short film.  A full-length feature, okay, but a short?  Hey, you do what you want, Kurt Vonnegut.  It's just that in And So it Goes, Charles J. Shields's biography of Vonnegut, "Fortitude" is only mentioned (and Shields incorrectly calls it a "one-act play") because Vonnegut once fought to halt the distribution to film festivals of an unauthorized film made from the script.  It just seems to me to be a curious footnote, given its format.

Not so curious in its content, however.  Vonnegut was always a passionate advocate for euthanasia, and issues about which he was passionate did not always bring out the subtle artist in him, hence the doctor in "Fortitude" who attempts to keep his patients alive beyond all point of reason being named Norbert Frankenstein ("Norbert" being the kind of thing Vonnegut would do).  The patient, Sylvia Lovejoy, is an enormously wealthy woman, 78-years-old, and left, now, after all of Frankenstein's work, only a head connected to wires.  There's not a great deal more to summarize about "Fortitude" in order to give you an idea about it, other than to say that Sylvia wants very much to die.

Vonnegut's satire was usually a weirdly powerful mix of bluntness, sentiment, and weary cynicism, fueled always by his endlessly inventive imagination.  "Fortitude" is blunt, but there's not much sentiment, and not much imagination because he's self-consciously building, though with a reasonable amount of nimbleness, from a pre-existing and well-known source.  And the cynicism's not that weary, either, perhaps because Vonnegut thought he could do something about this one (but as a short film?).  Regardless, the upshot is that "Fortitude" is quite straightfoward, with two things I'd like to note.  One is that it is science fiction and it is horror.  I was surprised that it did fit into the horror genre, but what has been done to Sylvia Lovejoy and what that has done to her mentally is ghastly and grotesque enough, God knows, to count -- how many horror stories have included a hideously malformed creature begging to be killed?  And, though timeliness is of no great concern to me,  it really is clever how Vonnegut updates Shelley's horror classic, the "horror" not at all being lost on Vonnegut, as it was not on Shelley, even though she couldn't have imagined her own prescience -- she and Vonnegut would have gotten along just fine, probably.

The other thing I wanted to point out is this strange bit.  "Fortitude" is a script, remember, and most of the writing that isn't dialogue is your standard scene-setting, general character description, "cut to," and so on.  But then, near the end, as Dr. Frankenstein is arguing with Gloria, the woman who does Sylvia's hair and her friend, over the ethics of the situation, Vonnegut interrupts the dialogue with this:

And the conversation picks back up.  What is that?  Well, I mean, what it is, is a writer of novels writing a screenplay.  But what else is it?  I've been sitting here since I read "Fortitude" this morning -- I've done nothing else! -- trying to figure it out, and the best I can do is to say that maybe it's an attempt to evoke some kind of...I don't know.  I thought perhaps it was Vonnegut's attempt to emphasize the words spoken just before the freeze, as they're spoken by Gloria and maybe expressed where Vonnegut thinks the story should end, as far as public policy in real life goes, but while Vonnegut no doubt backs Gloria's words in that moment, they're too specific to this story, and don't work too well as a message.  They're more about how weird Norbert Frankenstein is, and less righteous indignation.  So I don't know.  But it absolutely for shit's sake is a writer of novels taking a swing at this whole screenplay business.

The other writer I was interested to find in The Ultimate Frankenstein was Loren D. Estelman.  Among those who know Estelman, I don't know if he's better known as a crime writer or a Western writer, but he writes a great deal of both.  His crime fiction is made up primarily of a long series featuring a detective named Amos Walker, though there are also some stand-alones, one of which, Whiskey River, I've read, and it was pretty dang good.  I've also read a few of his Westerns, starting with Bloody Season, an excellent take on the Wyatt Earp legend.  Possibly better, but in any case more unusual, is The Master Executioner, a pitch black chronicle of the life of an Old West hangman.  Again, that book is pitch black, in one sequence possibly overly so, but for the most part hugely effective.  I wasn't aware Estelman had ever written in any other genre, and outside of this one story, "I, Monster," maybe he hasn't. 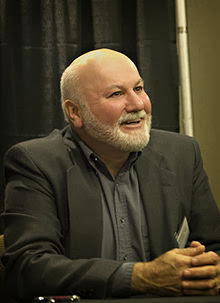 "I, Monster" is a straight-up sequel to Shelley's novel, and it finds the creature alive in the 20th century, having decided not to burn alive as we thought, but to freeze to death.  He can't even do that, though, ending up frozen like Captain America and thawed out in what would in 1991 have been the present day.  And that's pretty much your plot, the creature escaping from the scientists who found him and stumbling through our world baffled, shocked, fascinated and horrified by the scientific and technological progress, science not being his favorite thing.

It all leads up to a kind of joke that at the time would have reflected the culture before quickly going out of date, until now when it reflects our culture again.  It's not a joke played for laughs, exactly, but it's a kind of knowing wink.  I'm not a big fan of it (though on top of that joke is a reasonably decent punchline having to do with how Shelley's creature has been misidentified over the years).  But otherwise it's a good story because it's so richly written.  There's a good passage describing the creature's realization that he's in an airplane -- this coming shortly after awakening from his frozen coma, and before he escapes -- where he says:

By now I had divined that this was no celestial chariot, but an earthly craft, and that somehow during my time in the North, that accursed Science that was Frankenstein's only altar had mastered the art that Nature had intended for birds as thoroughly as he himself had usurped the Power of Life.

The last section certainly sums up Frankenstein, albeit in simple terms, and so the creature's take on modern aviation is unquestionably a logical, and even powerful, extension.  If there's too much of the creature pulling an "Oh these inexplicable modern marvels!" act, I would still have to acknowledge that Estelman makes the most of it.  It's not like it ever edges into "What is a pizza...pie?" territory, because even if there is a joke at the end, at least Estelman means it.
Posted by bill r. at 7:30 AM