The Eternal Image of You 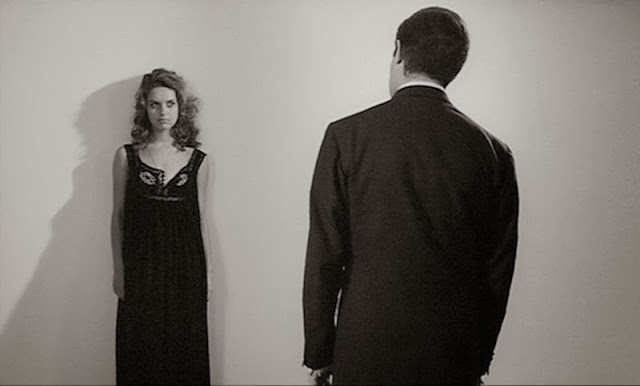 As trilogies go, the three films that Michelangelo Antonioni made between 1960 and 1962 -- L'Avventura, La Notte, and L'Eclisse -- are bound pretty loosely.  I say this as someone who has not yet seen L'Eclisse, but unless that one ends with the revelation that all of Monica Vitti's characters were the same person, and maybe Lea Massari's character Anna, who vanishes in L'Avventura returns to gather together everybody from all three films and says something like "You were all chosen for a reason," I feel like I'm on pretty solid ground.  I've seen the trilogy described variously as a "unified statement about the malady of the emotional life in contemporary times," which is one way of looking at it, and as "trilogy on modernity and its discontents," which is another, one might say similar, way of looking at it.  So it's not as if there's no point to be made here, but "unified statement" or not it strikes me as an oversimplification.  You might as well say that Kafka spent his creative life writing sequels to "The First Long Journey By Rail."

Years ago, The Criterion Collection, following some twisted logic known only to themselves, already released L'Avventura, the first of these films, and L'Eclisse, the third film, and are only now getting around to releasing the second, La Notte.  I'm not actually complaining, though, because this release has acted as the kick I needed to finally dive in.  L'Avventura is a fairly damning portrayal of a certain kind of solipsism, a special kind in that it hides behind its opposite, and an especially insidious kind because, whatever class satire (of a uniquely non-humorous sort) one might wish to find in it, or even that Antonioni may have put into it, it can live inside everybody.  The lead characters in that film, Sandro (Gabriele Ferzetti) and Claudia (Vitti), even know that their emotional connection to their missing friend is a put on, and Claudia at least has the decency to be quietly horrified by this.  Antonioni is quite sympathetic towards the people he's damning.

La Notte is not dissimilar, even though, while love and desire feature strongly in L'Avventura, in La Notte the emotional collapse becomes very focused.  If I had to boil L'Avventura down, as far as what Antonioni seemed to be trying to communicate, or expose, or examine, I'd say the limits of empathy is the secret subject.  La Notte does rein things down to something that is perhaps not unrelated, which is the dissolution of a marriage.  This is another oversimplification.  As a matter of fact, while the story is about a husband, a well-known novelist named Giovanni (Marcello Mastroianni) and his wife Lidia (Jeanne Moreau), realizing they no longer love each other, and the night of social networking during which they separately realize and come to terms with this, the opening credits and final shots reminded me of David Cronenberg's Crash (and in one way more J. G. Ballard's Crash than Cronenberg's, but this is a potato/potato kind of distinction).  The words "modern" and "modernity" are not thrown at these Antonioni films for nothing, and the opening credits of La Notte play over images in elevators, looking out at parking garages, concrete angles, glass and metal.  The location is a hospital, where Tomasso (Bernhard Wicki), a close friend of Giovanni and Lidia's, is dying.  They go to visit him, chat, soothe, mostly listen.  It's made clear that Tomasso's fast-approaching death is gutting Lidia more than it is Giovanni -- while Lidia is outside the hospital crying, Giovanni is (against his better judgment, which is about the best thing you can say about the man) succumbing to the not inconsiderable, in their way, charms of a sick -- mentally at least, but physically as well, you have to assume -- young woman just down the hall from Tomasso.  La Notte's emotional stage is set.

As in L'Avventua, the main couple will split to go about their separate business (in the earlier film, that business will pretend at an urgency that Sandro and Claudia don't actually feel), and here Antonioni's gift for drifting narratives and a drifting camera takes over.  Lidia's aimless stroll into a nearby village where she watches kids shoot off fireworks (and this is Italy in the 60s, so kids could buy the industrial kind that now have to be licensed out to stadiums for officially sanctioned Fourth of July celebrations, so it's pretty sweet, guys) is completely mesmerizing, and is probably my favorite stretch of the film.  For all the almost otherworldly gloom, so powerful that it even seeps like fog into the extended party sequence that makes up roughly the last half of the film, Antonioni is able to capture within that life as it is lived, and as it is observed by those, like Lidia, in a situation that leaves them witnessing this kind of joy with a fascination over what it must be like to feel that way again, or ever.

The story being told is loose and floating, yet not exactly digressive.  Or rather, when La Notte is digressive, it is being itself most completely.  At the elegant party that carries Giovanni and Lidia to morning, the couple go their separate ways, Lidia to watch others, and to ward off advances, and Giovanni to look for any excuse to betray her.  In this way, and in others, La Notte resembles Rossellini's Journey to Italy -- if I'm being straight with you, it has a good deal more in common with that than with Crash, but Crash is there too, I'd swear to it -- though its fairly clear that Giovanni's infidelity would crush Lidia somewhat less than Alex's would Katherine's in that film.  An argument could even be made that as off-putting as Giovanni's behavior is -- its very helpless casualness comes off as especially cold-blooded -- he and Lidia, in their mutual falling away, are playing the same, or a very similar game.  As the two part company with Valentina (Vitti), a young woman at the party who's somehow seductive even in her morality-based rejection of Giovanni, and who after that has sought to befriend, honestly, Lidia, Valentina says "You two have really worn me out tonight."  I think we can agree that this line is not exactly not sexual, though it's a curious sort of threesome.  It fits into the concept of romance as doom, however, and from there it's just a matter of denying the truth.
Posted by bill r. at 5:09 PM