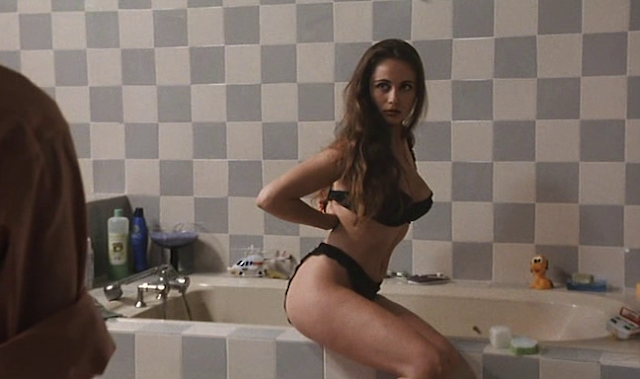 One of the better, by which I mean both "perfect" and "inevitable", author-director pairings I've encountered is that of Ruth Rendell and Claude Chabrol. Rendell, the late British writer of exquisitely diabolical and bleak tales of human catastrophe may not have been adapted by Chabrol, the late French director of either an individual's moral collapse or the blossoming of that same individual's immorality, depending on how you look at it, all that often (there are only two: Chabrol adapted Rendell's The Bridesmaid in 2004, and her masterpiece A Judgment in Stone as Le Ceremonie in 1995), but the degree to which the two artists seemed to be on the same page is akin to the psychological twinship of David Cronenberg and J.G. Ballard. Cronenberg has thus far only adapted Ballard once, but when Ballard died it's a little surprising that Cronenberg didn't himself pitch over face down in the garden, mysteriously.

All of which is to say that, just as it's impossible for me to watch certain Cronenberg films such as Shivers and eXistenZ that are not adaptations of Ballard (and in the case of the former was written in complete ignorance of Ballard's work) without nevertheless thinking of Ballard almost constantly, it is similarly pointless for me to bother trying to resist, any time I watch a Chabrol film, the specter of Ruth Rendell hovering over the proceedings. And even though Rendell was a writer of suspense and mystery novels, this juxtaposition occurs in my head even when the Chabrol film I'm watching is not of a similar genre. Which brings me to the Chabrol films collected together in a new Blu-ray set by Cohen Media. This trio of 90s films from the extremely prolific director did not follow one after the other -- in fact they're broken up by first The Eye of Vichy, his 1993 documentary about Nazi-occupied France, and the aforementioned La Ceremonie -- but as a package both harmonize with each other and feed into my Rendell thoughts, and break off sharply, leaving me stranded as someone who may have overstated his case. But in any event, enough about Rendell, would probably be the wise philosophy hereafter, and more of Chabrol. 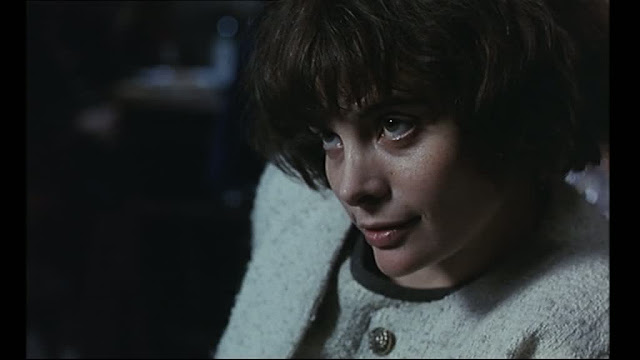 But I'll be damned if Betty, the first film chronologically in the set, doesn't remind me of Rendell. At least as far as the psychology of the characters is concerned. In Chabrol's film, based on a novel by Georges Simenon, the titular Betty is played by Marie Trintignant with a wild mix of despair, depression, innocence, aimlessness, coquettishness, and, as it transpires, more. When we first meet her, Betty is horribly drunk, with the aim of becoming even drunker. A man claiming to be a doctor (and maybe he is, but it turns out he's also a junkie) is happy to oblige her, and take from her later whatever payment he deems fitting, one presumes, until Mario (Jean-Francois Garreaud), the owner of the bar to which the doctor has taken Betty, and Laure (Stpehane Audran), Mario's lover and a retired nurse who lives in a nearby luxury hotel, save her, with Laure almost instantly taking the younger woman under her wing. Laure rents a room, adjacent to her own, at the hotel for Betty, and helps Betty arrange to have her clothes and other personal items picked up from her former home, where her estranged husband, the son of a prominent military figure, and their two children still live. This all leads to Betty explaining to Laure how she ended up in this lowly alcoholic haze of a life (though Laure herself can drink, herself), most of which we learn in a series of flashbacks. Chabrol gives these scenes a while to take a full shape -- how and why did Betty disgrace herself in the eyes of her husband and her in-laws? what did Betty sell, as a way of buying her way out of the family and a future of public scandal, a decision that fills Betty with shame and seems to fuel her drinking? -- until finally a clear, or clear-ish picture of this tortured young woman reveals itself.

And yet. I can't go too much further without robbing Betty of too much of its considerable power. Though not a suspense film, Betty has within it a considerable amount of quiet suspense, and, more importantly, though not a mystery film, the force of its final impact is due to an accumulation of story and character information, and of performance. Chabrol, who up until the point that everything we need to know has been learned has been as invisible as ever, steps out of the shadows and kicks you, and everyone, in the stomach. At no point in Betty is a crime committed, yet by the end it's understood that the world the characters inhabit is an amoral one, and maintaining one's honor, and expecting others to do the same, is a sure way to bring Rendell-ian doom down upon one's head. 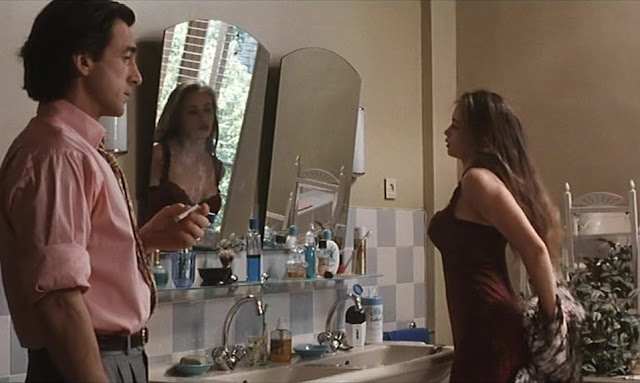 More terrifying still is L'Enfer, from 1994. Originally conceived and written by Henri-Georges Clouzot, the film was begun but left unfinished by Clouzot in 1964 (footage of the aborted project is used in Serge Bromberg's documentary Henri-Georges Clouzot's Inferno). Thirty years later, Chabrol adapted the original script, and cast Emmanuelle Beart and long-time collaborator Francois Cluzet as a young married couple who run a lakeside hotel. Initially they seem quite happy, but after a while Paul (Cluzet) begins to suspect Nelly (Beart) of being unfaithful with one of the hotel's regular guests, Martineau (Marc Lavoine, a kind of French version of Everett McGill). Even before Paul makes his suspicions known (first to the audience, eventually to Nelly), the viewer is clued into something being off in their relationship by Chabrol's use of a few frames of pitch black to separate some scenes. At first jarring, then perhaps merely an experiment in visually representing jumps in time, this technique achieves its full, if mild, note of disorientation when at one point it seems to cut off Nelly in mid-sentence.

When Nelly first learns of Paul's suspicions, she's touched, because she takes it as evidence of his love for her. But soon his jealousy becomes more aggressive, and, further, it becomes impossible to persuade him that he's wrong. Chabrol makes it fairly clear, I think, that Paul's accusations are baseless, but the precise reason Paul is so certain is less so (though I suspect casting Emmanuelle Beart as Nelly was not done arbitrarily). This fits, as his behavior, and finally his violence, become, one hopes, impossible to understand, and Paul shifts from a man one might find it possible to empathize with to a man one hopes to see hit by a bus. Both Beart and Cluzet are superb, but Cluzet in particular feels frighteningly authentic. Watching L'Enfer, as Cluzet's Paul begins to really spin off into a storm of choking rage and paranoia, I thought "This seems like exactly the kind of man, or one of the type of men, who murders his wife." I was reminded less of Rendell, I'll confess, than of another Chabrol film, his more naturalistic (in L'Enfer, Chabrol sometimes employs Dutch angles and back-projected shadows to highlight the irreality of Paul's thought process) Pleasure Party from 1975, which, along with Fosse's Star 80, strike me as the most depressingly believable depictions of murder, and murderers, I've seen on film. Anyway, with Cluzet, Chabrol again reaches those same heights of unease and menace, and with Beart that same heartbreaking confusion and fear, as the marriage she thought was happy becomes a prison of terror and abuse. She woke up one morning and found herself in Hell. 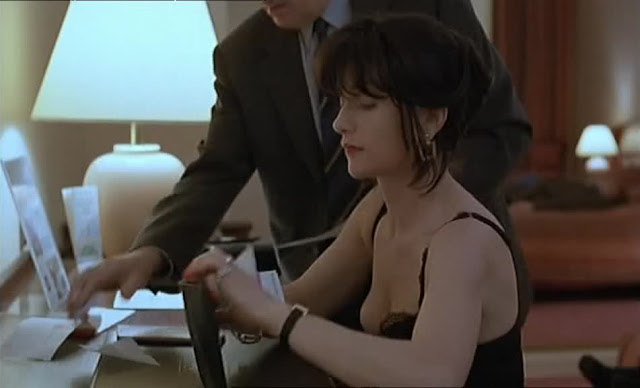 It's a curious irony that the last film in the set, 1997's The Swindle, is a light-hearted con artist thriller that also includes, of the three, the bloodiest moment of violence. But at a certain point, as is the tradition in this sort of light thriller, the stakes must be, or often are, raised. Chabrol, directing from his own original script, does so effectively, but up to that point The Swindle is simply great fun. It's about an at first glance mismatched pair of con artists -- Isabelle Huppert as Betty and Michel Serraut as Victor, the age difference pronounced, but other than business partners what are they? Their relationship doesn't appear to be romantic. In any case, the plot takes them to Sils Maria in Switzerland, where a local hotel is hosting a dentist's convention, which Victor believes offers many opportunities to rip off rich orthodontists. Betty precedes him there and when Victor arrives he finds out that she's already found a mark, but not one associated with a convention. The man, Maurice (Cluzet again), is hauling around an attache case stuffed with five million Francs, which he has to deliver for, etc. Victor and Betty begin palling around with Maurice, laying the groundwork to snatch the money, while, gradually, the question arises, as it often does in these situations, who is conning who? And who is conning that person?

I do not mean to sound dismissive with those glibly phrased questions. The Swindle really is a delight, Serraut in particular is wonderful (he's closer to being the star than he is to sharing the main stage with Huppert), and part of that delight comes from recognizing the structure but not knowing what exactly that structure is supporting this time. And there are just lots of little details, like Cluzet, somewhat more likable here than he was in L'Enfer, a little bit drunk, raving that cheese fondue "gives [him], personally, a taste sensation like no other." Chabrol seems to be on vacation a little bit here, and more power to him. It's fun to go along with him.
Posted by bill r. at 7:01 PM 2 comments: