For reasons I can't quite put my finger on, no other blog post I've written has generated as many e-mails from readers interested in knowing more about the subject than this one from 2012, about the mysterious horror writer William Scott Home. The phrase "mysterious horror writer" may explain most of it, I suppose, but anyway I get a lot of e-mails asking if I know anything more about the man, or if I ever got into contact with Home's sister, who some time after it was published found the piece and left a comment that I didn't notice until a while later. So my answer to the curious was always some version of "No, sorry."

Well, without saying more than I should, and not to make the events sound more clandestine than they were, especially since outside of writing that post I had nothing to do with any of this, there's now a blog about Home that has been put together by people who actually know the man. I've been kept in the loop about this, for which I'm very flattered, but I mostly had to keep mum because certain people have been waiting for certain things. But the thing's live now, as is the first post, which is a fairly detailed short biography of William Scott Home. He's a surprising guy. For example, perhaps you don't know that he's alive and well and living in Alaska doing work in the fields of biology and anthropology, and he doesn't seem to have much time for the internet. 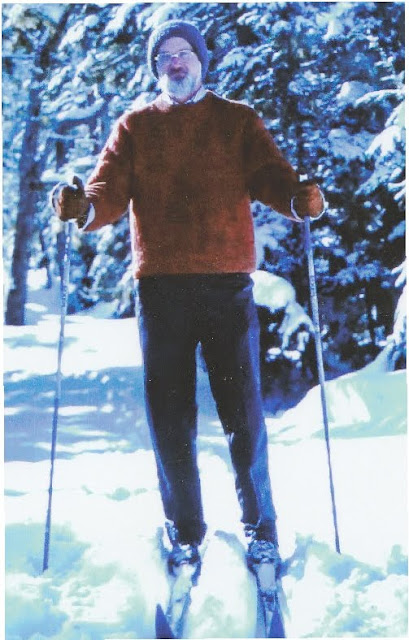 The Passage of Time and the Indifference of the World 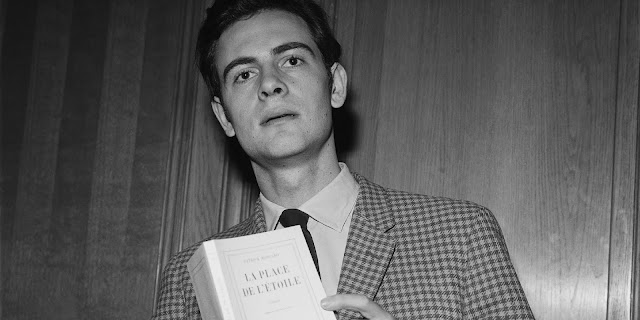 When the French writer Patrick Modiano won the Nobel Prize for Literature in 2014, I remember Peter Englund, secretary of the Swedish Academy, which awards that particular prize, said of Modiano's work: "I don't think he's difficult to read. You can read him easily, one of his books in the afternoon, have dinner, and read another in the evening." That struck me as a little bit condescending, to Modiano or potential new readers or both, but it's true that Modiano's books do tend to be quite short. Since winning the prize, his fiction, once rare in the US, began to to flood the shelves (relatively speaking), and one book, Suspended Sentences, gathers together three of Modiano's works that were originally each published as an individual volume in France. All three bound together maxes out at 212 pages (the shortest book, Afterimage, is only 60). Already this year, I've read four of Modiano's short novels (over a little more than two months, which admittedly isn't at quite the clip Englund suggested), from three different translators. And what has struck me so far is something Modiano, whom Englund has called "a Marcel Proust of our time" (which is less condescending), himself said, in the midst of his charming confusion immediately after winning the Nobel, which is that "I have always felt like I've been writing the same book for the past 45 years."

Which is very Proustian of him, not to mention, from my very limited experience, true. Curiously, none of the four I've read have very much to do with the Nazi occupation of Paris, which is known to be one of his two major themes (though its shadow is there in Afterimage and Suspended Sentences, from which the larger volume takes its title; my only real experience of his take on the subject is through his screenplay for the Louis Malle film Lacombe, Lucien), but all four are absolutely awash in the problem and sadness of memory. That's the book he's been writing for the last 45 years, and what other book could possibly take so long to write?

The other two Modiano novels I read recently are a pair that have just been released by NYRB Classics. Their titles, at least in English translation, not only hint at the theme of memory but also point to memory's unavoidable sub-theme: In the Café of Lost Youth, from 2007, and the most recent Modiano book I've read, and Young Once, which from what I can tell could be the title of all of Modiano's books. As a summary of an artistic philosophy, Modiano couldn't do much better. From what I can tell, the literal translation of the original French title, Une Jeunesse would be A Youth. That's not so bad either. 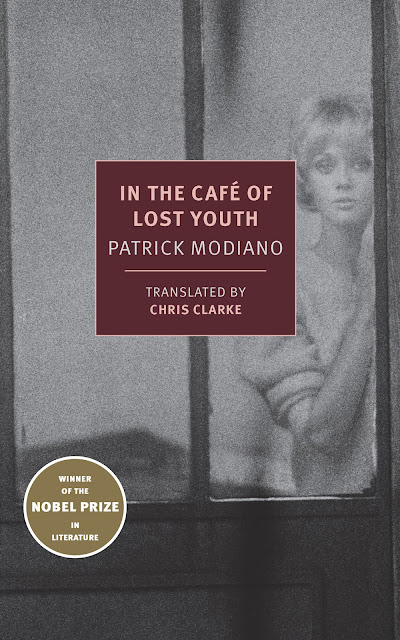 I'll start with the more recently published of the two, though. Set in the 1950s, the story is told by four different people over the course of four long-ish chapters. The first voice, a nameless young student (who we are perhaps to think of as Modiano himself) introduces us to the important elements. There is a café called the Condé that is unique and beloved among a group of loyal, somewhat eccentric patrons.

First of all, some details about the Condé's regulars are necessary. Well, they were between nineteen and twenty-five years old, with the exception of a few customers such as Babilée, Adamov, and Dr. Vala who were approaching fifty, but no one paid any mind to their ages. Babilée, Adamov, and Dr. Vala still clung to their youthfulness, men we might describe with the melodious and obsolete moniker "bohemians." When I look up "bohemian" in the dictionary, I find: A person who leads a wandering life, without rules or worries about the next day. Truly a definition well suited to those who frequented the Condé. Some, like Tarzan, Jean-Michel, and Fred, claimed to have had numerous run-ins with the police since their adolescence, and La Houpa had escaped from the Bon Pasteur Correctional Facility at sixteen. But we were on the Rive Gauche and most of them lived in the sheltered world of literature and the arts. I myself was going to school. I didn't dare tell this to them, and I didn't often mingle with their group.

The central figure among the Condé's regulars is a young woman named nicknamed Louki (everyone who is accepted by the old regulars as a new regular gets a nickname). She's a mysterious woman, but what's interesting is that Modiano uses certain noir tropes, like the mysterious woman, and even the private detective -- this is the occupation of the second narrator -- without it ever becoming that. Louki, whose real name is Jacqueline Delanque, isn't a shady character with mob ties. She's simply an unhappy young woman who is desperate to find something to lift her out of the buzzing uncertainty of her life. The private detective is on her trail because her husband, named Jean-Pierre Choureau, wants to find her. He's not a bad man, and she's not a bad woman. But she just walked away. At one point, the detective, named Caisley, working from a variety of evidence, including an obsessive notebook of the comings and goings of the Condé's regulars compiled by one of their own, says:

Sunshine. I was lost in my thoughts. Jacqueline Delanque could count on my discretion, Choureau would never learn anything of the Hotel Savoie, the Condé, La Fontaine Garage, or this person named Roland, doubtless the brown-haired guy in the suede jacket mentioned in the notebook. "Louki. Monday, February 12th, 11 p.m. Louki, April 28th, 2 p.m. Louki with the brown-haired guy in the suede jacket." Throughout the pages of the notebook, I had underlined her name each time in blue pencil and recopied all the notes that concerned her on loose sheets. With the dates. And the times. But she had no reason to worry. I wouldn't go back to the Condé.

The fourth narrator is the man Rolan mentioned in the above passage, and that last chapter is the really heartbreaking one. But curiously, the third narrator is Louki herself -- it's not common for the mysterious figure who everyone wonders about to have a voice in their own novel. But here she does, and by doing so Modiano makes her more than a simple mystery, without taking the mystery away. In the Café of Lost Youth is a novel that is less about the act of looking back than the other Modiano books I've read, it seems more present, but the climax (seen from the point of view of the last narrator, the man who loves Louki) is blunt and upsetting enough to seem like a sad memory. Which is what the book is -- it's not present, after all. It is looking back. 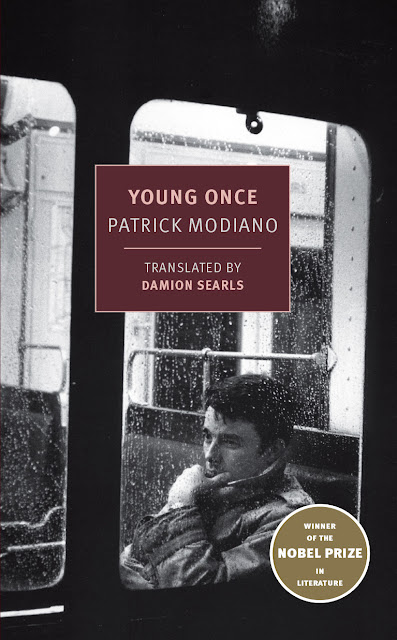 Young Once, meanwhile, is all memory. It's the story of Louis and Odile, a married couple, each on the cusp of their thirty-fifth birthday when we meet them in the 1980s, when the book was published, but who exist for the vast majority of the novel as twenty-year-olds taking their first steps into adulthood. Which is both an accurate and a simplistic way of putting it. Set mostly in the early 1960s, for a while we follow Louis and Odile as they live their lives as strangers to each other. Louis has just been discharged from the military and enjoys the charity of a possibly shady man named Brossier, who will eventually get Louis work with a definitely shady man named Bejardy. At the same time, Odile has been picked more or less out of a crowd by a music producer named Bellune. Odile does indeed have ambitions to be a singer, and Bellune, a kind and honorable man, takes her under his wing. But soon after she's recorded a few songs for a potential album, the melancholy Bellune commits suicide and Odile is set adrift into the darker realms of the music business, where she is pressured into sex by men who could but do not do anything for her career.

In the four Modiano novels, it's rare to come across an incident, early in the story, as dramatic as Bellune's suicide, and indeed much of Young Once follows what I take to be his usual pattern, which is to send his characters through a series of mostly everyday experiences, meeting an assortment of people who "don't move the plot along," with everything covered in a lightly foreboding and perhaps heavily melancholy atmosphere. That sense of foreboding comes from Modiano's use of noir tropes -- remember the detective in In the Café of Lost Youth; in Young Once there's the certainty that Louis is working for a criminal. Perhaps for Modiano this is part of the subject of memory: the memory of films he saw and crime novels he read long ago. But instead of the threat of violence hanging in the air, as in those books and movies, there's the sense that one day we'll be much older than this, and our memories will remind us only of what's been lost.

Bellune kills himself because of things it is now too late to do, or correct. Louis and Odile are too young to even fully despise the bad things that happen to them. It's just one thing and then the next thing; plus they have each other. For them, everything is the present. The past is not worth mentioning. And what's fascinating about this book, and if I went back I could probably find this in all the Modiano I've read so far, is that there's nothing about the future. Well, there is one mention of it. Early on, Louis, during one of his many stretches of idleness, is alone in his room:

Ever since the interminable days he had spent in the barracks infirmary, he'd had the habit of listening to his transistor radio in its green leather case. Lying down, looking at the ceiling, he would think about the future, or in other words about nothing...
Posted by bill r. at 6:18 PM 1 comment: