The Kind of Face You Slash - Day 26: Smoke and Flying Salt 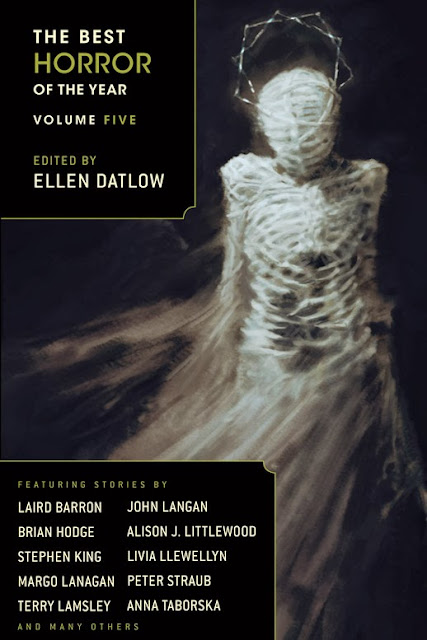 Every year, at around this time and in some cases several months earlier, readers of horror fiction can be sure that soon they will be able to wallow in the pages of a variety of "best of" anthologies. By "a variety" I do only mean three, but they're reasonably jam-packed, and there's a lot less cross-over, in terms of stories appearing in more than one of them, then you'd probably think. Of course it's all objective, but the editors have access to a good deal more horror fiction in a given year than I do, and I've always regarded these things as handy sampler platters, which is probably the secret intent anyway. So every year, like I'm saying, these things come out, and I devote at least a couple of posts to a small fraction of what these backs have to offer. Now, there's three big ones, editor Ellen Datlow's The Best Horror of the Year, Stephen Jones's The Mammoth Book of Best New Horror, and Paula Guran's The Year's Best Dark Fantasy & Horror (a somewhat distinctive title that I believe translates to "horror"), but right at the moment I have in my possession only the Datlow and Guran books.  Jones's anthology won't hit stories until October 29, which makes sense in its relation to October 31, but right at the moment does jack-shit for me.

Today I'm going to focus on the Datlow volume, which, like Jones's, offers a nice little overview of the previous year in horror, and I've already ordered a copy of Your House is on Fire, Your Children All Gone by Stefan Kiesbye which is mentioned therein, so thanks for that.  Outside of that, it's all stories, you guys, and I, as is my wont, selected two.  To begin with, I homed in on Jeffrey Ford's name in the table of contents, because even though I've never read him before he wrote a book of short stories that looks like this: 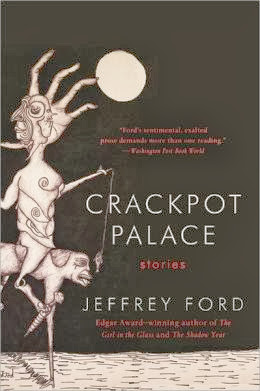 If you don't want to read that book just after looking at that picture, then fuck you.  I'm hoping though that the whole idea that sometimes good writers write bad stories holds true with him, because the one I read, "A Natural History of Autumn," was rather disappointing.  The story is set in Japan, and I think Ford wants you to know that he has just returned from Japan.  Which would have been entirely fine if he'd taken his knowledge of certain Japanese traditions and myths and created something unique, but instead he took it all and sprinkled it like wasabi, a traditional Japanese spice, over a story that is almost depressingly ordinary.  Even drinking sake, a Japanese rice win, afterwards can't make this story work.  Also have you guys heard about that weird suicide forest they got over there? "A Natural History of Autumn" is about Rinko, a kind young man who might work for a gangster, and Michi, a young woman who works at a hostess bar.  Rinko likes her because she seems shy and sweet, and as they talk at the bar he learns that her ambition is to write a book called A Natural History of Autumn, sort of philosophical non-fiction examination of her favorite season.  She says that she asks the men she meets at the bar about their most pronounced memory -- happy, sad, or otherwise -- of autumn, and this she does by way of research.  Rinko says that he can tell her a story, and take you to a location especially lovely in an autumn sort of way.  It's called an "onsen" and that's a kind of spa.  So they go, fall in love, wonder about the old woman who runs the place, and then at night Michi sees the old woman fucking her dog, and the dog smiles at Michi, and she wants to leave, just all out of the blue.  The dog, we learn, is ajinmenken, which I looked up.  Jinmenken are dogs with the faces of humans.  These are basically a Japanese version of chupacabras, in that their legend consists mainly, from what I can tell, being seen (or "seen") and reported and not believed in by the majority of Japan's population, but once they're introduced in Ford's story they become just interchangeable monsters trying to kill Michi and Rinko.  At this point, it's just a run-from-the-monster story, one with a twist at the end that helps nothing (in fact it brings the story down further), so the Japanese-ness -- the onsen, the jinmenken, the hostess bar, some other minor bits -- is finally completely irrelevant.  It's maybe a nice setting, but why do nothing with this?  Why do nothing with jinmenken other than say "You know what, they're sort of like werewolves" and then make then sort of like werewolves?  Not to mention that title, "A Natural History of Autumn," implies I'm not sure what, but something, that Ford apparently had no intention of following through with.  It's a story about monsters eating people dressed up in a kimono, which is a traditional Japanese gown.

The other story is by Adam L. G. Nevill called "Pig Thing."  Obviously I'm going to read a story called "Pig Thing," but I also wanted to read it because of Nevill, and holy shit I just realized something.  Okay, I wanted to read the Nevill story because I thought "Hey, he wrote those novels I want to read, this will be a good way to get some idea about his writing and if I'd like him or not" but I just remembered that I did the exact same thing last year in a post about John Oliver's anthology The End of the Line; from that collection I chose, among others, Nevill's story "On All London Underground Lines."  So I already went through all this with Nevill.  How am I supposed to lead into "Pig Thing" now?  Goddamnit, I've been doing this too long.  Jesus Christ.  Fucking hell.  Shit. 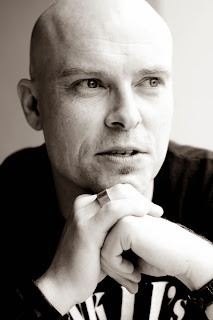 Well, there's your lead-in, I guess.  "Pig Thing" is about an English family who has moved to a home in the wilds of New Zealand.  As the story opens, the three children -- Hector, who is ten, Jack, who is nine, and Lozzy, who is four -- have just watched their parents, Dad first, then Mom to search for him, leave the house and not return.  And they won't return.  Dad was going to go for help, but no help is coming.  There is a pig thing outside, a creature that has haunted their home since they moved in, but now appears to want in, and to eat.

The pig thing looks almost like you might expect -- it has a "snouty face" -- but with some disturbing details -- it has "thin girlish hair that fell about its leathery shoulders."  Nevill does a good job of sketching the thing in, so that a not quite fully seen, but massive creature is burned into the reader's brain as he otherwise focuses on the three children.  He does good work with them, too, not making them unreasonably adult in their behavior, which is so often the approach to these things.  Horror writers write about kids quite a lot, but they often write about them in a way that makes me think they'd rather be writing about adults, and Nevill doesn't do that.  In fact there's an element to all this that really highlights how ruthlessly he does not do this, but I'd have to tell you the whole story, so maybe check it out yourself.  Otherwise, it's a good story from an old tradition that, again, like the Ford story, tries to draw from a relatively exotic locale.  But Nevill pulls it off better by not making a big deal about it, and by making "Pig Thing" part of two traditions, the other being that those not familiar with the wilder parts of nature should take them very, very seriously.  Simple, perhaps, but sometimes that's just the thing.
Posted by bill r. at 7:34 PM

Labels: Adam Nevill, Ellen Datlow, Jeffrey Ford, The Best Horror of the Year, The Kind of Face You Slash

You might like Nevill's book The Ritual, which I picked up recently and found surprisingly good. A real unapologetic, Lovecraft-style horror story with an almost claustrophobic atmosphere at times, and a neat variation on the formula Blair Witch Project, lost-in-the-woods plot.