The Kind of Face You Slash - Day 30: Watched it Burn 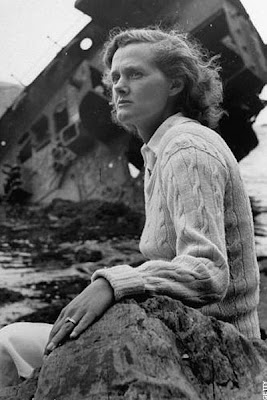 Daphne du Maurier is responsible for a lot of brilliant ideas that moviegoers typically and thoughtlessly attribute to others. Hitchcock's The Birds is Hitchcock's The Birds, and du Maurier's name in the credits registers for most people as someone who had to be paid off so the film could be made. This is nothing to do with Hitchcock himself, and du Maurier is by no means unique in this way. But I think of the unfairness when I think about du Maurier, because of this line from Roger Ebert's review of Insignificance, directed by Nicolas Roeg:

Roeg is a master of baroque visuals and tangled plot lines. His Don't Look Now still has people trying to explain that Venetian dwarf in the red raincoat...

Oh? Is that what Nicolas Roeg did? I remember first seeing Don't Look Now -- which is one of my favorite films -- and being stunned by that ending, then finding the du Maurier story on which it's based and (I still sort of hate myself for doing this) reading the ending. Same red dwarf, same red raincoat, same everything. Roger Ebert is a very well-read man, but it's something I've noticed about some well-read people, that after a certain point, if they haven't read something, it might not actually count as having been written.

All this made me very curious about Daphne du Maurier, who before my Don't Look Now experience I'd pegged as some sort of jumped up romance novelist. I was probably being sexist in my youth. Not only that, but even though I've overcome that knee-jerk assumption, it didn't actually spur me to read du Maurier. My reading life, or more accurately, my not reading life, is positively littered with writers who passingly interest me, and whose work I collect about me, and then leave untouched on the shelf. Even the recent raves of a discerning friend of mine -- too discerning, I might sometimes say -- couldn't provide the necessary push to make me actually crack one of my du Maurier books. Feeling bad about this whole thing and having no idea what to read for today finally did, though.

I finally decided, after much indecision, to go with "The Birds". Like Don't Look Now, Hitchcock's film is a favorite of mine, and I was very curious to see how du Maurier's original played out. And the comparison is very interesting. Reading "The Birds" and watching The Birds is not entirely unlike partaking in the many different films and books that share the premise of humans cloned for the purposes of organ harvesting, but very little to nothing in terms of tone, style, goals, or even plot. The Hitchcock film takes place in San Francisco, and as a result has a larger canvas, of character, setting, set pieces. Du Maurier's original story has a very small cast, made up mostly of a single family: Nat Hocken and his wife, and their two children, Jill and Johnny. Outside of that is the Trigg family, on whose farm Nat works, and Jim, another of the Triggs' employees. Like the film, du Maurier's story takes place in a bayside community, but calling both San Francisco and the small English village where the story takes place "bayside communities" is a little like saying Monte Carlo and Lawrenceburg, IN both have casinos.

Everything that happens -- and it all gets started pretty fast -- in "The Birds" is seen from Nat's point of view, and he's one of the only people in his small circle of family, friends and acquaintances who takes this sudden thread of attacking birds seriously, even though it quickly becomes clear that this is, at least, a national situation:

Various incidents were recounted, the suspected reason of cold and hunger stated again, and warnings to householders repeated. The announcer's voice was smooth and suave. Nat had this impression that this man, in particular, treated the whole business as he would an elaborate joke. There would be others like him, hundreds of them, who did not know what it was to struggle in darkness with a flock of birds. There would be parties tonight in London, like the ones they gave on election nights. People standing about, shouting and laughing, getting drunk. "Come and watch the birds!"

Nat's relationship with what's going on is different from what he predicts will be the reaction of others for several reasons, and is key to why du Maurier's story is so brilliant. First, as implied, he has struggled in darkness with a flock of birds, when, at the story's beginning, they crashed through into both his own bedroom, and that of his children. But it goes beyond that, because throughout Nat also remembers, and compares the bird attacks to the World War II air raids he and so many other English people had suffered through:

Jim was no more interested that Mrs. Trigg had been. It was, Nat thought, like air raids in the war. No one down this end of the country knew what the Plymouth folk had seen and suffered. You had to endure something yourself before it touched you.

This attitude helps Nat and his family revert to the strength and planning that got Nat through those bombings. The fabled stiff upper lip of the British during the war returns in the Hocken home -- and not, you get the sense, elsewhere -- and Nat's enthusiastic attempts to bolster the optimism of his young children is du Maurier at her most moving. As the birds slam heedlessly into the Hocken's cottage, which has been transformed into something as close to a fortress as Nat can manage, Johnny, the youngest, pipes up:

"Stop it," said young Johnny, pointing to the windows with his spoon, "stop it, you old birds."

They began to cheer when they heard the thud of the suicide birds.

Because birds suddenly turning into bloodthirsty man-killers could not have been predicted, and travelling far from home soon becomes suicidal, the Hocken family soon even has to resort, once more, to rationing. The two cigarettes Nat has left not only becomes an indicator of his unostentatious ability to go without, but they provide a stark and despairing capper to the story that, quite frankly, trumps the hell out of the still great climax envisioned by Hitchcock and screenwriter Evan Hunter.

Just a quick nitpick - Hitchcock's The Birds mostly takes place in Bodega Bay, a small town about 50 miles north of San Francisco. In the movie it's one town. In reality it's two small towns Bodega and Bodega Bay that are about 10 miles apart. I grew up in the area and we used to drive by that schoolhouse every time we went to the beach.

Great choice. One of my go-to tomes when I can't think of anything else to read is the Folio Society's edition of Du Maurier's collected short stories. Ditto John Buchan's stories, which have a similar tone.

If the BIRDS remake were actually to happen, it'd be cool if they readapted the story and stuck closer to it. The setting and the family dynamic make it far more compelling (and terrifying) than the Hitchcock.

Romero has stated in interviews that I AM LEGEND was a major influence on his DEAD films, although there's nothing specific from the book that would be actionable (which has probably frustrated Matheson for years, I'd suspect...)