The Kind of Face You Slash - Day 24: Tiny Last Straws

I’m running on not a great deal of sleep today, having tried last night to fall asleep while listening to a podcast that dealt extensively with the Jack the Ripper murders, and feeling about that awful bit of history -- possibly for the first time in my life, as unhappy a thing as that is to admit – rather depressed. And then actually sort of frightened, as images of disturbed men entering my bedroom as my wife and I slept drifted unstoppably through my mind. The details of how this fear manifested itself shall be left out of this account, as they would cast me in an undignified light, but rest assured the whole time I was berating myself for thinking and acting like a scared child. (You might also consider excusing any rambling quality that might seep into tonight’s post.)

The upshot of it all is, again, that I didn’t sleep too well, which turns out to dovetail pretty nicely with today’s reading. My impulse for today was to go back and read someone I consider to be one of the giants of horror, Robert Aickman. Aickman’s short fiction is a bit on the long side, typically thirty to fifty pages, and my dumb ass somehow regards reading even a single Aickman story to be something of a commitment, within a single day at least, so as a result my reading of the man I consider to be one of the two best, if not the single best, horror writer of the 20th century, is rather scattershot. I’ve grabbed at his stories off and on over the years, rarely reading more than one over as many days (the one time I did was when I read two for my post on Aickman back in 2008). One of the results of this is that when I do sit down with an Aickman story, I get very excited because I know I will be having a rare reading experience.

So it has again proved with today’s story, “Into the Wood” (which, for anyone who cares to know these things, and I hope there are more than a few of you who do, can be most easily and cheaply found in a used copy of the Aickman collection The Wine-Dark Sea). I chose this one because Peter Straub, in his introduction to the book, says “’Into the Wood’ seems to me the masterpiece of this collection. In it all of Aickman’s themes come together in an act of self-acceptance which is at once dangerous, enigmatic, in narrative terms wholly justified, and filled with the reverence for the imaginative power demonstrated by Aickman’s work in general.” Now, The Wine-Dark Sea also includes “The Inner Room” which I consider to be among the small handful of greatest horror stories ever written (and which Straub, in another book I have, once chose as his own favorite horror story, the fickle bastard), so in my view “Into the Wood” has a lot of work ahead of it in order to supplant that story as the collection’s masterpiece. That I don’t believe “Into the Wood” manages it, though, is of course meaningless. “Into the Wood” is very odd, and very Robert Aickman-esque, which certainly stands to reason, but what I mean is that it is as full of the things Aickman liked to put in his fiction as Straub suggests, to the point that it achieves a certain density, both of tone and of detail and, if such a thing can be dense, of pacing. A lot of Aickman’s stuff is very deliberate in its pacing, and it’s hard to see how it couldn’t be, but “Into the Wood” might achieve some kind of zenith in the area. Which is not a criticism. 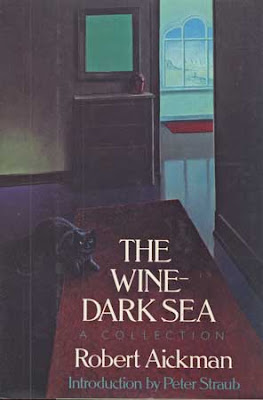 It certainly does help that Aickman was a superb writer of prose. His story here is about a middle-aged English couple, Henry and Margaret (aka “Harry” and “Molly”, which confused me for a bit early on) who travel to Sweden because the husband, an engineer, is helping to build a road there (this is something Aickman-esque in itself, a career detail from a man whose non-fiction books bore titles like Know Your Waterways). The husband has his work to deal with, and Margaret has what basically amounts to a vacation to attend to. This separates the two of them at various times, and causes Margaret to reflect on the state of their marriage, which seems quite tenuous, though whatever is at the heart of the rift -- apart from Margaret's clear dissatisfaction -- is not spoken of. Anyway, with one thing or another, Margaret learns of sanitarium, which doubles at a hotel called Kulhus, that intrigues her, and when Henry is called to Stockholm she asks to be put up there to help along her relaxation. Henry agrees, and soon Margaret is checking out her room:

Margaret was given the most beautiful room: large, with a view from the windows extending for miles, charmingly furnished, and with no fewer than three long rows of assorted books in at least four languages. Margaret, who read books, looked at this small library with considerable curiosity. As far as she could tell, the volumes seemed even to have been chosen with care, and to be by no means mere left-behinds or the bedtime reading one might expect -- if one could in an hotel expect anything of that kind at all. But immediately it had occurred to Margaret that these were not books of the sort that most people would read to induce slumber, she observed that the next work on the shelf was a substantial tome named Die Schlaflosigkeit, which she suspected might mean "Insomnia."

And she's probably right, because it turns out Kurhus's function as a sanitarium is to help chronic insomniacs. This Margaret learns from another Englishwoman, a patient there, named Sandy Slater. Among the things Margaret learns from Sandy is that the whole name for the place is Jamblichus Kurhus, "Jamblichus" coming from Edward Gibbon's Decline and Fall of the Roman Empire:

"Jamblichus was the one among the seven sleepers who after they had slept for two centuries, went down into town in order to buy food, tendered the obsolete coins, and found himself arrested...Anyway, places like this used often to be called Jamblichus Groves; even by the unsophisticated."

The Kurhus is also set against a large expanse of wood which Margaret comes to learn is full of well-worn and smooth paths used by the insomniacs to walk through at night, when they should be sleeping. For what purpose? And of course Sandy warns Margaret away from it, but not too strenuously, not in any typical horror story, stay-out-of-the-woods sort of way. Along the way, we will meet some of the other patients, such as Colonel Adamski, a Pole World War II veteran who wants Margaret to feel more free to indulge in the customs of the insomniacs than Sandy is; and a young, thin girl who Sandy claims has never slept a wink in her life. Then, eventually, Margaret goes home.

This is a very hard story to summarize, as are all of Aickman's, because it doesn't follow any typical structure -- it's unique not just to horror, but to fiction in general, in my experience. It is a story that climaxes with a frustrated attempt to find a room to rent. It features the main character leaving the source of unease successfully because she doesn't feel comfortable. So she leaves. What kind of a story is this?

It's a story where the aforementioned unease comes from without, the insomniac hospital, to afflict something within Margaret, her unhappiness and desire for some kind of freedom beyond the thoughtless ideas -- such as "creative outlets" -- generally suggested to housewives in her frame of mind. Colonel Adamski says:

"...For men and women there is to everything a limit, beyond which further striving, further thought, leads only to regression. And this is true even though most men and women never set out at all; possibly are not capable of setting out. For those who do set out, the limit varies from individual to individual, and cannot be foreseen. Few ever reach it. Those who do reach it are, I suspect, those who go off into the further forest."

Margaret's eyes were shining. "I know that you are right," she cried. It is something I have long known, without finding the words."

It doesn't sound very scary, does it? But fairy tales are in there, of an only hinted-at, sinister turn, and myth, and Freud, and all somehow jumbles up in Margaret's head to make her follow an honest and fair train of thought about her unhappiness, and lead her into an abyss. Why? Because she's wrong? No, I don't believe so, nor do I believe Aickman believes so. About his own work, Aickman once wrote:

...I do not regard my work as "fantasy" at all, except, perhaps, for commercial purposes. I try to depict the world as I see it; sometimes artistically exaggerating no doubt...and occasionally exaggerating for purposes of parable... I believe in what the Germans term Ehrfurcht: reverence for things one cannot understand. Faust's error was an aspiration to understand, and therefore master, things which, by God or by nature, are set beyond the human compass. He could only achieve this at the cost of making the achievement pointless.

In a sense, Aickman's stories are magnificently pointless, in that what can be taken away in terms of meaning is usually quite nebulous, or you can't take anything. There's an unease, and a horror, that doesn't come from nowhere, but there is a connection between character and experience that you often can't locate. There's a thread, or a trail, that you can follow, and willingly do, but when you come out the other side, even if you're home, you're still lost.

I apologize for this one. I've been half asleep all day. Robert Aickman deserves better.
Posted by bill r. at 5:55 PM

Labels: Robert Aickman, The Kind of Face You Slash

No need to apologize; this is a fascinating and very thoughtful reflection on one of Aickman's most extraordinary stories. Some of the story reflects Aickman's predispositions so clearly that it might seem trivial (if one is aware of them): yes, the modern world deadens us (though Aickman died much too early, perhaps it's for the best that he never had to cope with the Internet and the mobile phone, which have so malformed us). But I think that the miracle of the story is Margaret's slow realization that there is something in her seeking a way out, and the way in which that isolates and elevates her. Aickman's genius for concrete detail is on full display here (Margaret overhearing the cooks singing as they prepare lunch, as she starts to walk in the forest), yet the detail only serves to highlight the utter strangeness of what is happening. What a story! I am with you on "The Inner Room," which is also one of my favorites, but "Into the Wood is right up there. And--your mileage likely varies--my personal favorite (just a bit ahead of the others), is "The School Friend," and I think we would agree that there is something quite special about Aickman's stories with a female protagonist.