The Kind of Face You Slash - Day 26: The Skullcap of the Beast 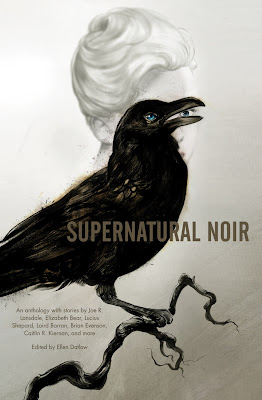 Speaking of genre hybrids, as I was yesterday, remember two years ago (of course you do, why wouldn't you?) when I talked about Laird Barron's "The Imago Sequence", a crime/horror hybrid that won me over as I was in the act of writing the post? Well, crime/horror -- or as its practitioners would probably prefer you call it, horror noir, or noir horror -- has become enough of a thing that the ubiquitous Ellen Datlow recently published an anthology called Supernatural Noir (or maybe that's what its practitioners would prefer you call it) devoted entirely to such stories. Having read a bit of it now, I'm quite happy it exists, because just based on my small sample Datlow has drawn from a pool of talent who know what it mean to combine these kinds of stories, as well as these tones, which neither Datlow nor anyone else represented in Supernatural Noir would be the first to point out aren't too terribly far apart to begin with.

It's a nice lineup, in Supernatural Noir. The great Brian Evenson is there, Joe Lansdale (of course), Lucius Shepard, Melanie Tem. Lee Thomas, who I wrote about earlier this month. There's enough here that I could have, and maybe should have, skipped over the already-covered Laird Barron, but I'm finding this year, that I'm continuously drawn towards writers I've given little more than a glancing look in the past, not least because that glance is probably the last time I've read anything by them. Barron is here, with a story called "The Carrion Gods in Their Heaven", and I wanted to read it. It's that simple. So I paired that one off with a story called "But For Scars" written by Tom Piccirilli, who I've never read but who I know of because of his occasional penchant for baroque titles like A Choir of Ill Children, and This Cape is Red Because I've Been Bleeding, a book of horror poetry. From that perspective, as a title "But For Scars" can only be regarded as a disappointment, but boy he sure has a handle on his material.

Of the two, "But For Scars" feels the most like a crime story, while Barron's story feels more like horror. Piccirilli structures "But For Scars" as an investigation, conducted not by a regular cop but by a man on the fringe of society, and in a setting of rampant lawlessness and corruption. "But For Scars" begins with our unnamed narrator waking up in the very early morning to find a sixteen year old girl holding a .22 pistol, fatally overfeeding the narrator's fish. It's an image not out of line in something like, say, James Crumley's fiction, nor is Piccirilli's language:

Men would consider her sexy as hell until she hit maybe twenty-five, and then she'd be downgraded to bruised fruit. By the time she was thirty the neighbors would be saying she hadn't aged well. 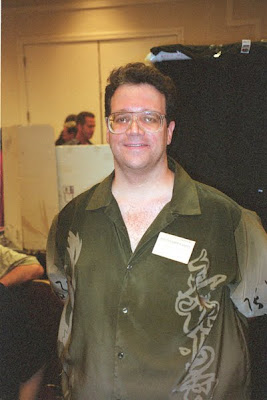 The narrator knows the girl -- he's living in what was once her home. Her parents, Ron and Katy Wright, were brutally murdered in the basement, and their daughter, Emily, dealt with the loss in a manner that landed her in a state hospital for six years. It is from there she's just escaped. Our narrator knew Emily's parents very well (Emily asks him "Did you ever fuck my mother?", and while he doesn't answer her, he answers us through the narration: "I had. A lot."), and in fact was and is a part of the same outlaw biker gang as they, and within said gang the murders of Ron and Katy are believed to be an internal thing. Emily wants to know who killed her parents, and she wants to use her .22 on them. He wants to get the gun from her and calm her down and help her. She tries to seduce him, and he, by the skin of his teeth, manages to resist. They fall asleep in his bed, and when he wakes up she's gone. He sniffs the air, and smells something terrible coming from under his bed:

I crouched down and peered underneath and saw Emily wedged there wit her eyes and mouth open. She'd cut he wrists with the pocketknife I kept in an ashtray on my dresser. It hadn't been very sharp and she'd really had to saw into herself.

The narrator had awoken in the first place because he believed Emily had whispered in his ear that she was pregnant, and this, along with her death, fuels his desire to find out what's going on, who killed her parents, who got her pregnant if indeed she was (the narrator seems confident he wasn't dreaming, and I was never clear why) -- all of this leads him to state hospitals and into the lair of the biker gang. It's quite an excellent short crime story, where the supernatural horror is so subtle as to be questionable as that. You don't really doubt that there is something ghostly going on here by the end, because two different characters describe the same phenomenon that neither would have been likely to privately share with the other, but it's interesting that our point of view character never sees anything otherworldly for himself. "But For Scars" is a morbid and sad crime story that has just a hint of...something. Plus, as I write this, I'm asking myself other questions, the answers to which are not provided, and which on reflection add a more visceral horror kick to the whole thing.

But mainly, "But For Scars" is a really nicely written piece of crime fiction, of the currently popular semi-rural type. It's tough, though, and mean. When the narrator is being roughed up by probably corrupt cops, following Emily's suicide, Piccirilli writes:

One detective smacked me with a sloppy open palm. His hand was soft and smelled of aloe. Afterward, he looked like he wanted to apologize. Another cop tried to work my kidneys but he couldn't find them. I didn't know whether to be grateful or disgusted.

Well, that's great, and proves that Piccirilli knows the language of crime fiction. If anything about "But For Scars" is frustrating it's that in just under thirty pages, Piccirilli creates a world that I would love to return to for other crime stories, or, better yet, novels. Forget the barely-there horror stuff, even -- this overcast world of brutal biker gangs in control of a corrput town is a great setting that I fear I won't be reading about again anytime soon. 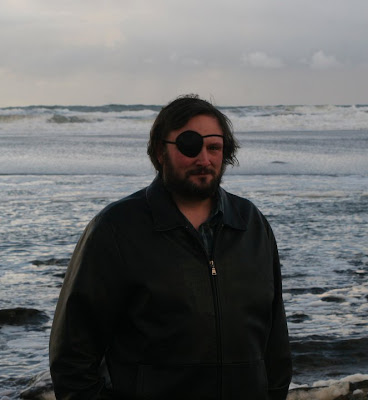 Laird Barron's "The Carrion Gods in Their Heaven" does not have the same effect, and it's hard to talk about this without sounding like I'm criticizing one story or the other. It's just interesting to me that Piccirilli leaves me wanting more, and Barron leaves me feeling as though I've been given enough, and both reactions reflect well on the stories. I think I know why this is. "But For Scars" is a crime story first, and for whatever reason crime fiction is most effective in novel form. Something about the genre benefits from the long form. Horror, for whatever reason, is precisely the opposite, finding its greatest power in the short story. And, of course, as I've said, "The Carrion Gods in Their Heaven" is a horror story before it's anything else.

It does have a common crime set up. Lorna is on the run from her rich, abusive husband, Bruce, and with Miranda, her lover, she has moved into an old cabin outside of the very small town of Poger Rock in the state of Washington. The cabin is known by locals as the Haugstad Place, and of course the history of the structure, and the bloody past of Haugstad himself, will come into play later. But Miranda gets a gun, private investigators hired by Bruce come sniffing around the place, Lorna drinks a lot, and violence is considered as an end result of all this. As indeed it is, but of a rather different sort.

One day Miranda comes home with a giant animal skin, one used apparently as a cloak, that she'd found in the surrounding wilderness. Lorna finds it hideous, but Miranda becomes more and more attached to it, and her behavior, and desire to be violently proactive in regards to Bruce and his hired guns, begins to very reasonably freak Lorna out:

The pelt covered Miranda, concealed her so she was scarcely more than a lump. She whined and shuddered and took otice of the pallid light, and she stirred, Lorna was convinced that the pelt was not a loose cloak, not an ill-fitted garment, but something else entirely for the manner in which it flexed with each twitch and shiver of Miranda's musculature.

Miranda said, in a voice rusty and rugged, "Why don't you...go on to bed. I'll be along. I'll come see you real soon."

So "The Carrion Gods in Their Heaven" is rather creepy, actually, and it moves from there to grotesque, at a level that is nearly Clive Barker-ian. I could nitpick at the concept behind Supernatural Noir as it pertains to "The Carrion Gods in Their Heaven", as it doesn't really feel like Barron wrote a genre hybrid so much as it was realized that the common set-ups for any number of horror stories could double as the set-ups to crime stories, but pffffft. Who cares. This is good fiction. Good new horror fiction, even. And brother, that ain't hay.
Posted by bill r. at 1:11 PM

Hot diggity. This looks like a collection I'll have to get my chain-smoking, graveyard earth-smeared paws on. I'm a sucker for this type of mash-up, and I'm actually in the process of writing a serial-esque tale in a similar vein. So, if for nothing else, hopefully this impressive-sounding volume can give me some pointers.