The Kind of Face You Slash - Day 25: Corpseworld

You know who’s pretty popular right now? George R. R. Martin. My research tells me that Game of Thrones, the first book in his now massively successful A Song of Ice and Fire fantasy series, came out a full three years before I’d ever read a word of the man, and I don’t believe at the time that I knew he had this fantasy series going that was about to light shit up all over the place. No, the book I was drawn to was Fevre Dream, an early horror novel about vampires and steamboats set during the glory days of the Mighty Mississip’. If you want to argue with me that those things don’t go together, be my guest, but it is an argument you will lose, sir. Although the truth is, I ultimately felt a little let down by Fevre Dream, I think possibly because it played out more as an adventure story, with vampire killings, than actual horror. It’s been so long, I can’t remember what exactly bothered me about the book, and because of this I now have kind of fond memories of it. I don’t know how that works, but science is working on it.

Since then, until recently, I’d followed up on George R. R. Martin by reading not one more word written by him. I did become intrigued anew when the HBO series Game of Thrones (why is the series named after the first book, and not the overarching title? Drives me nuts) kicked off, and I did read about 100 pages of the first novel, was enjoying it thoroughly, but had to respectfully set it aside – since when my wife has swooped in and picked it up – because other, ongoing reading projects had to be my priority. But anyway, I loved the crap out of the HBO series, and want to learn more of this “George R. R. Martin” person.

I did learn a fair bit from this New Yorker profile, which focused on the weird, in some cases combative, relationship he has with his fans – the weirdness all coming from the fans, it should be noted – who demand that he write faster than he’s currently able. It gave me a lot of respect, not to mention sympathy, for a guy whose dreams of becoming a writer have come true in a way that I’m sure surpass anything he’d imagined, and has also put him on the firing line, in the crosshairs of a bunch of nerds who think what Martin is doing is somehow easy. “Just take these hundreds of characters and several dozen plotlines you’ve created over the course of many books and bring everything together in a way that is not only viscerally and artistically satisfying, but looks just like it does when I have dreams about it. And do it fast! God!” Of course, I haven’t read the books yet. If I had, I guess I’d probably hate Martin for writing books I love, too.

But we’re not here to talk about fantasy fiction. Although I gather we probably could pretty easily, as it seems to me the concept of genre hybrids is one with which Martin is intimately familiar. From what I’ve read/seen, A Song of Ice and Fire is a cross between historical fiction (in this case everything’s made up, but still Martin drew on it as an influence), fantasy and horror. Fevre Dream is an adventure/historical/horror novel, and the story I read for today, “Meathouse Man”, is science fiction/horror. Any number of stories I’ve come across in various anthologies could, from what the editors claim, be easily slotted with fantasy or horror. I’m not sure Martin has written in a genre that he hasn’t crossed over with something else. In this case, like “The Savage Mouth” from a few days ago, Martin ties his horror to a genuine – if extremely unlikely – science fiction concept. “Meathouse Man” wonders what might society – for lack of a better word – be like in the future, and what about it might crack open a man’s brain? 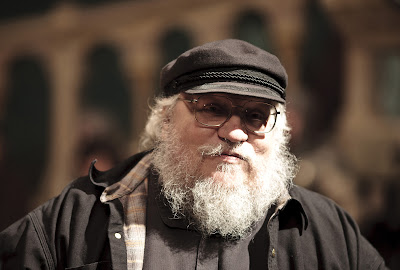 Martin has said that “Meathouse Man” was born out of a great deal of personal pain, all of which he dumped into the story, one he now finds it painful to reread. Not that it’s any of my business, but it’s not hard to imagine at least which region on the giant map of pain he was suffering through. “Meathouse Man” is an anti-love story about a man named Trager whose profession is one of corpse-handler. Martin wrote a short series of stories about this line of work, and the idea is that in the future – and maybe the details of this get worked out in one of the other stories, not that it matters at all – in certain parts of the inhabited cosmos, corpses have been made to come alive, not in a literal sense, and not even in a zombie sense, but in a puppet sense, so that they can be controlled remotely and made, by their handlers, to perform any kind of task a living person could do, but at this point no longer wants to. Trager’s work is a little vague, but his corpses do manual labor, digging pits and blasting rock and the like. When we meet Trager, he’s not even twenty years old, and he’s a very shy and nervous sort who has been partially taken under the wing by Cox, who is essentially the foreman of Trager’s crew. Through this group of older, more streetwise men, Trager learns of the pleasures of the meathouse, which is a brothel where all the professional women are corpses. Upon finishing:

He left her as he'd found her, lying face up on the bed with her legs apart. Meathouse courtesy.

So there’s your horror, I think it’s safe to say. As he grows older, Trager tries to strike out into a mature world -- having sex with galvanized corpses being this story's equivalent of a peep show, or I guess a regular hooker -- of real love. It's his desire for this, and his failed attempts to bring it about, that provides "Meathouse Man" with its gut-punch.

[The meathouse] had been good, exciting; for once he felt confident and virile. But it was so easy, cheap, dirty. There had to be more, didn't there? Love, whatever that was? It had to be better with a real woman, had to, and he wouldn't find one of those in a meathouse. He'd never found one outside, either, but then he'd never really had the courage to try. But he had to try, had to, or what sort of life would he ever have?

We'll find out soon enough, unfortunately. There are a few remarkable things about this story. The first one, for me, is Martin's approach the the hybrid of genres. I would now very much like to read the other "corpse-handler" stories (and I will, in short order), because I wonder about the tone, if each one was as despairing as this one. I have to think that's part of it, given that the series deals with corpse-handling, but I'm interested in the idea that the same science fiction concept can be used by the same author to explore the different ways it affects those who live within that world. I can imagine any number of tones being struck and genres utilized, from comic to, well, "Meathouse Man" would be the opposite end of that spectrum. Martin didn't write more than a few of these (according to his notes in the career-retrospective story collection Dreamsongs -- volume one, to be specific -- which is where I've gotten all the information about this story) so I don't guess he got that deep into it, but I do like the idea.

Another thing, "Meathouse Man" being a horror story, I thought I knew where it was heading, but I was entirely wrong. I thought it was going to be more conventionally horror-y, really, more genre specific, and it's not that a version of this story that followed that route would have been bad -- I was quite interested when I thought I was right -- but that Martin was evidently completely uninterested in making something that categorizable. What "Meathouse Man" is, is a horror story about despair. Not about the violence despair can drive one to, but the bone-deep damage that can be done to the person suffering from it. "Meathouse Man" ends with a line of extraordinary bitterness, one that might seem a bit juvenile on its own, but in the context of the story, and knowing how personal the story is, it ends up being a slap. You don't have to believe it yourself -- I don't -- just that Trager does, and that Martin, in 1973, had to spit out the words even if he didn't really believe it himself. Everybody at one time in their life has thought, or even angrily said, "Fuck everything, I don't care anymore." The difference between those people and George R. R. Martin is that Martin turned that into a story.
Posted by bill r. at 5:58 PM

I really liked "Meathouse Man." I've heard great things about "Sandkings" too, and am trying to track it down. Your comments about FEVRE DREAM are spot-on. Don't have any interest in that fantasy stuff, though.