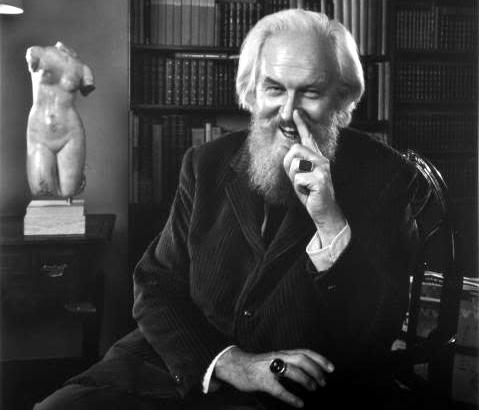 That's a picture of Robertson Davies. I wish I'd seen that picture earlier, because it would have given me a better idea of what to expect from a Robertson Davies-penned ghost story. Or barring that, I could have read the introduction to High Spirits (the title of which could perhaps be construed as yet another tip-off), Davies' one collection of ghost stories, in which he says:

And so on. My point was made at the use of the word "cheerful". I'd read some Davies before last night, two full novels, in fact, which is a good deal more that is often the case here. Those novels, Fifth Business and The Manticore were both read long enough ago that the details are more than a little bit hazy, and the ravages of time have not been held back at all by my own inability to retain anything that I read, think, or say, but I can still recall that both novels, the first two parts of Davies' Deptford Trilogy had their share of humor, they were certainly not all frivolity (one of the few things I remember is a sad and embarrassing scatological mishap that occurs late in The Manticore), so I thought however Davies would approach the ghost story, it would include at least a nod towards the terror that the genre is traditionally meant to evoke. Plus, the back cover copy of my Penguin edition of High Spirits uses the phrase "a touch of true scariness" as one of its descriptive highlights.

But no, as I'm sure you've guessed by now. Or no, not as far as I've read, at least. I read three stories from High Spirits, and not one of them was ever intended to frighten or disturb anyone. This is certainly not the fault of Robertson Davies, and there's a mild irony in the fact that while the stories don't quite suit my purposes for The Kind of Face You Slash, I still want to read the rest of the book. What's fun about High Spirits is that each story is told by the same narrator, an unnamed (from what I've read) man who could probably be safely dubbed "Robertson Davies" who is a professor at Massey College, in the University of Toronto. Such was the case with the real Davies, Massey College being a real place who, Davies explains in his introduction, needed a ghost. So at various Christmas parties on campus, throughout the years, Davies would tell a new ghost story. The ghost story told at Christmas is a long, but sadly now apparently long-dead (and anyway, never American) tradition, one that also led the world to have the ghost stories of M. R. James in it. James never saw himself as a writer of ghost stories, but he was so good at coming up with them for Christmas parties that he was urged to publish. He did, and got on with his life. Similarly, Davies had other things in mind for his own fiction, but he enjoyed ghost stories very much, had a good time thinking up his own, was already a published writer of strong reputation anyway, might as well. The difference is, Davies is playing with a tradition that James was smack dab in the middle of. A certain light-heartedness is bound to follow.

Anyway, as I was saying, what's fun about High Spirits is that the stories are almost connected by virtue of all having the same setting, the same narrator, and some recurring characters. I enjoy this sort of thing, and when, in one story, "Einstein and the Little Lord" (the one of the three I read that is the least like a horror story) that the ghost of Albert Einstein would count as the seventeenth ghost to visit Massey College, and after some quick counting on my part I discovered that "Einstein and the Little Lord" was indeed the seventeenth story in the collection, I thought that only a curmudgeon like myself would turn his nose up at such a delightful lark of a book. And even I couldn't do it!

It's impossible to say for sure if this was a lucky coincidence or simply that I'm picking up on one of the book's running jokes/themes, but it does seem as though the three stories I chose contain an interesting peek into the way Davies built off of throwaway bits from one story to inspire him for another, completely separate one. For example, the earliest story I read is called "When Satan Goes Home for Christmas". This story does include Satan, who wants to go home to heaven for Christmas, but can't, because of what happened and everything. This, by the way, is the story that contains the greatest whiff of the antiquary about it, especially ending how it does, which is important in this strain of the ghost story tradition. But the story begins with someone from the college mocking the narrator, Davies, for his previous, self-regarding ghost stories -- it's always the ghost of someone famous, apparently, visiting him -- so he goes about making one up:

It is an excellent story -- what used to be called in an earlier day 'a ripping yarn' -- and quite original. It is about a Junior Fellow of this College called Frank Einstein, a brilliant young biologist who discovers the secret of life in an old alchemical manuscript, and manufactures a living creature out of scraps he steals from the dissection lab in the new Medical Building...But because he cannot give his creation a soul, it is a Monster, and kills the Bursar and the Librarian and finally deflowers and then eats Frank's girl-friend, a graduated student called mary Shelley.

That "Frank Einstein" is a bit of a groaner, and there's a lot of that, frankly, in these stories, though Davies is also entirely capable of relating the lyrics applied due to "polar musical taste" to Dvorak's Humoresque Number 7 in G flat:

Passengers will please refrain
From flushing toilets when the train
Is standing in the station:
I love you.

It's the "I love you" that kills me. But anyhow, so in a later story, called "The Cat That Went to Trinity", Frank Einstein returns, with his full name being given as Victor Frank Einstein, and he falls in love with a student named Elizabeth Lavenza, a pretty young girl the narrator took note of as he likes to pick out the pretty girls in his class early on, so he'll have something to look at as the year proceeds. Also "Elizabeth Lavenza" is the name of the pseudo-sister Frankenstein falls in love with in Frankenstein, and the coincidneces are simply too strong for our narrator. The plot of "The Cat That Went to Trinity" has Frank and Elizabeth being given Shelley's novel to read, by our narrator, and then, because Massey College can't hold onto their cats (they all go to Trinity College), trying to make "the greatest cat you've ever seen" out of a dozen stray cats. Having been inspired by Frankenstein and everything. A version of which our narrator thought he'd come up with all by himself in "When Satan Went Home for Christmas".

As if all that weren't enough, when Davies introduces Frank Einstein in "The Cat That Went to Trinity", he writes that "some mention was made of a great-uncle of his, an Albert Einstein, whose name meant nothing nto me, though it appeared to have special significance in the scientific world." And of course, as I've already noted, the ghost of Albert Einstein visits Massey College in "Einstein and the Little Lord", a story I chose thinking it would be the continued adventures of Frank, not his great-uncle. In "Einstein and the Little Lord", our narrator seems fully aware of who Albert Einstein is, so either, in one of the stories between "The Cat That Went to Trinity" and "Einstein and the Little Lord" our narrator learns about the great physicist, or Davies couldn't give a fig about such continuity. I suspect I'll find out when I read the rest of these stories, which I surely will, horror be damned.
Posted by bill r. at 12:07 PM