The Kind of Face You Slash - Day 5: To Sing Extraordinary Songs

Considering that what passes for an idea around here is doing two days about vampires and then two days about zombies, it’s necessary for me to every so often indulge in a kind of palate cleanser. I do not want this October to progress into two days about wolfmans and then two days about Frankensteins and then two days about weremummies, and so on until we’re all curled up on the kitchen floor, probably dead. The standard horror tropes and subgenres and monsters can be wonderful and entertaining, stories based around them can be brilliant, but unless you hit some kind of freakish lucky streak in your reading, they can also very quickly become to-your-bones wearying. Fortunately, in my preparations for this project every year, I tend to overspend, and as a result I have a mountain of brand new horror anthologies – and old ones, too -- into which I plan to dive. But before I do that, I feel the need to make an abrupt tonal shift away from the last four days, and read something I had every reason to believe would be superb: Arthur Machen’s “The White People”.

Arthur Machen is the source of some shame for me. I wrote about him once before, in the first post of my 2009 series, and about two weeks later mentioned him again in my post about T.E.D. Klein's story "The Events at Poroth Farm". In that story, the narrator is a horror scholar who spends his downtime reading classic horror in preparation for large project, and of Machens' "The White People" he says:

Just before dinner, in need of a break, read a story by Arthur Machen. Welsh writer, turn of the century, though think the story's set somewhere in England: old house in the hills, dark woods with secret paths and hidden streams. God, what an experience! I was a little confused by the framing device and all its high-flown talk of "cosmic evil," but the sections from the young girl's notebook were...staggering. That air of paganism, the malevolent little faces peeping from the shadows, and those rites she can't dare talk about...It's called "The White People," and it must be the most presuasive horror tale ever written. 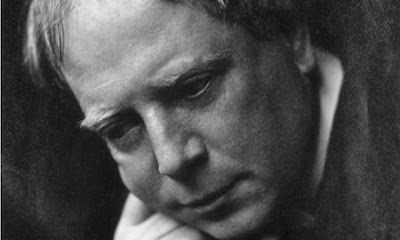 The reason for my shame, as I mentioned in passing in the Klein post, is that for all my supposed love of horror fiction, I had not, at that time, read "The White People" or very much Machen at all. After yesterday, I have now read two whole stories by him. So where, exactly, do I get off bitching about the shoddiness of so much in the genre if I'm not even reading all that much of the really good stuff? It's not like it's not up there on my bookshelves. This is a danger, for me anyway, with a project like this. Every year, between Octobers, I might consider reading something like "The White People" only to decide "Ah, I'll save it for the project." And I will in fact do that, but in the year between The Kind of Face You Slashes, my knowledge of the genre will not have increased too terribly much. It's like I've gotten to the point where I almost consider reading horror fiction off-season as a busman's holiday, and as Mr. Burns once said "That shouldn't be."

And make no mistake: "The White People" is terrific. It is, in fact, everything I claim to want from the genre, or near enough. The framing device, the one Klein's narrator was confused by, and it is sort of odd, consists of a pair of conversations between two men: Ambrose, an eccentric recluse and expert on the occult, a man with very curious notions about the true nature of good, evil, saintliness, and sin; and Cotgrave, a man, it is implied, with an interest in crackpots, hence his introduction to Ambrose. Cotgrave's interest in Ambrose eventually goes beyond a snarky clinical interest and becomes one of actual interest in Amrbose's ideas. Those ideas can be summed up in this passage:

"There is, no doubt, an analogy between [true evil and that which we call evil]; a resemblance such as enables us to use, quite legitimately, such terms as the 'foot of the mountain' and the 'leg of the table.' And, sometimes, of course, the two speak, as it were, in the same language. The rough miner, or 'puddler,' the untrained, undeveloped 'tiger-man', heated by a quart or two above his usual measure, comes home and kicks his irritating and injudicious wife to death. He is a murderer. And Gilles de Raiz was a murderer. But you see the gulf that separates the two? The 'word,' if I may so speak, is accidentally the same in each case, but the 'meaning' is utterly different. It is falgrant 'Hobson Jobson' to confuse the two, or rather, it is as if one supposed that Juggernaut and the Argonauts had something to do etymologically with one another. And no doubt the same weak likeness, or analogy, runs between all the 'social' sins and the real spiritual sings, and in some cases, perhaps, the lesser may be the 'schoolmasters' to lead one on to the greater..."

First of all, obviously I need to start dropping "flagrant 'Hobson Jobson'" into my everyday speech, but second you must understand that Ambrose is not merely saying that what we consider evil is the killing of one person, while true evil is the killing of several -- de Raiz was (allegedly!) a mass murderer, but he was also (allegedly!) someone who did more than dabble in the Occult, and according to Ambrose true sin is an attempt to achieve saintliness -- and not necessarily of the Christian variety, but of the otherworldly and spiritual anyway -- through occult methods. Evil "is the infernal miracle as holiness is the supernal," he says.

With that in mind, and motivated by a desire to prove to Cotgrave that he is not simply mad, Ambrose lends the young man a book, a small green book, the contents of which make up the bulk of "The White People." Those contents are the nearly feverish, but not necessarily insane, ramblings of an unnamed girl, aged sixteen at the time of her writing, and her slow and gently sinister introduction to the occult world by her nurse. It is difficult to summarize this section, and if you already consider yourself a potential reader of "The White People" you may not want me to try, but over about thirty pages of dialogue-less and nearly paragraph-less prose, the girl speaks of great wonders hidden in dark woods, and of "something wonderful" she thinks she might have seen there, something that has fueled her writing because to see it again would prove that everything her nurse had told her in her early childhood was true, and that the memory she has of seeing the white people in the stream is a true one:

...I sat quite still and watched, and out of the water and out of the wood came two wonderful white people, and they began to play and dance and sing. They were a kind of creamy white like the old ivory figure in the drawing-room...They played together, and danced round and round the pool, and they sang a song till I fell asleep. Nurse woke me up when she came back, and she was looking something like the lady had looked, so I told her all about it, and asked her why she looked like that. At first she cried, and then she looked very frightened, and turned quite pale. 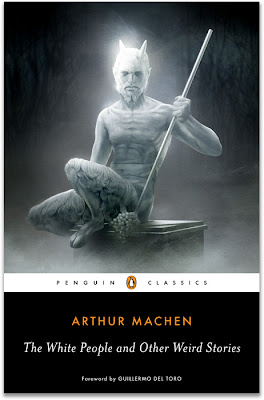 What's so unusual about "The White People" is that Machen uses the imagery of fairy tales, of actual fairies and worlds of people hidden inside a forest, basically unaltered, to bring across his horror. There are no long teeth or splatters of blood, but there is lots of singing and dancing, lots of strange rituals, the girl mentions speaking "the words" or making gestures with her hands, symbols in the air, the specifics of which she refuses to expound upon, and it is all so secret, and so apart from what we perceive as reality, that a surprising amount of dread builds as the story moves along relentlessly. Not only is the imagery like a fairy tale, the prose comes to mirror it, too, as the girl recounts stories her nurse told her (stories that being "Once on a time" or "In the time of the fairies"), stories that anyone might have heard as a child, but which Machen makes us believe might contain the true history of our planet:

And soon it was quite dark, and the sky was black, without a single star shining in it, and the stag went away into the darkness. And though the man had brought his gun with him he never shot the stag...And they went through the enormous woods, and they swam across rivers, and they waded through black marshes where the ground bubbled, and the air was full of will-o'-the-wisps...

Portions of "The White People" take on the form of a child telling a tale, transtioning almost every event and thought with "and" or "then", and in fact that is what much of "The White People" actually is, but instead of wonder or beauty and thrilling adventure, and despite the girl often referring to things as "wonderful" and "beautiful", somehow we know that enormous, unknowable evil, evil as a root of existence, like water or the human mind, is the thread that connects everything.

This is what the opening conversation between Ambrose and Cotgrave accomplishes, among other things -- it somehow makes what follows horrible, instead of merely curious, with hints of interesting shadows. It makes the fairy world terrifying almost by simply stating up front that the reader should find it so.

The epilogue to "The White People" finds Ambrose and Cotgrave together again, the latter returning the book, and we learn more about the girl's life subsequent to what is recounted in the book. I won't say what, although there is some level of safe assumption involved here, but the kicker is an ambiguous phrase Ambrose uses to describe the girl's current known status that is really compelling and insinuating and more than likely awful, if we knew what she knew, which we don't, and thank God for that.
Posted by bill r. at 7:26 AM

Labels: Arthur Machen, The Kind of Face You Slash, The White People

Terrific post! Your level of knowledge and thoughtfulness really comes through, and makes me want to go read the story. I've read a lot of horror fiction, particularly the more literary sort, and as I get older I've been enjoying the work of the acknowledged masters such as Machen more than I did when I was younger. I enjoy your October writing because no one else that I know of writes about this genre with such seriousness and respect. Kudos!

Thank you very much, Taidan, that means a lot to me. And you should rush right out and read "The White People", as well as Machen's "The Great God Pan", if you haven't already.