The Kind of Face You Slash - Day 28: Until the Rivers Run Red With the End of the World 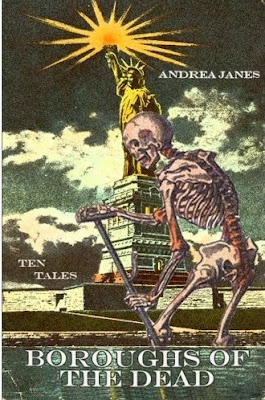 The common wisdom is that the world of self publishing is rife with terrible, useless, bitter writers who have been rightly rejected by the traditional and professional publishing houses, and think they'll show them by dumping their own money and Photosopping skills into ragged and unedited...thing, which they then flog relentlessly to anyone who will listen, and then fly into mad frenzies of self righteous delusion when someone claims that their book is maybe not so deserving of the ink and paper and glue that's been sacrificed in their honor. And there is often a good reason for this belief (please see the comments).

Still, though, my knee-jerk disdain for this sort of thing was dealt a sharp blow last year when I read Larry Blamire's collection of horror/Western stories called Tales of the Callamo Mountains, and since then I've been forced to reconsider my whole stance on self publishing as it pertains exclusively to Larry Blamire. Honestly, that was as far as I was willing to go. Blamire has a follow up collection in the works, and I'm led to understand that, too, will be self-published. It would count, I figured, as my second purchase within that shadowy realm.

Now, though, I don't know what to do with myself. I just finished a new book, a self-published one called Boroughs of the Dead by Andrea Janes. It's a first book, and it's a slender collection of ten horror stories set in New York City. I make no extravagant claims for this book -- I would not, for instance, put it at the same level as Blamire's book -- but it's good, and is quite interesting in a lot of ways. First, though, to give you some kind of perspective, I typically, as you've probably gathered, read around two or three stories to focus on for these posts. Boroughs of the Dead I read in its entirety. Now, some of this is just practical -- Janes' book is only about 120 pages, the the average length of the stories in it is about 12 pages. Still, though, I could have stopped after three. That's all I technically owed to the post. But the damn thing's just so brisk, for one thing, and for another there's such a variety of styles and tones and plots that I was compelled along by the constant question "What's the next one about?"

You can see Janes' comforts and discomforts pop up again and again, and it becomes clear pretty quickly that her strength lies in period stories, generally from the early 20th or late 19th century. Most of the best stories are of this type. "We'll All Be in the Arms of Our True Loves Before Long" (set actually in the late 18th century) kicks things off, and is told in the form of a diary kept by Dr. Charles H________ who, we're assured in a brief preface by former colleague Dr. Nathaniel W________, is "innocent of any wrongdoing by virtue of what seems to be, in my medical opinion, an acute nervous condition." We learn of the wrongdoing, of course, and what led to it -- a ghost, the ghost of a beautiful woman, who urges Charles along:

Suddenly I felt a faint pressure on the small of my back, and I shivered in the cool air. A voice, very close to my ear, said faintly: "Please." The spirit, for that is the only word I can think to call it, led me down the dusky evening streets. When it stopped, I was standing in front of the new well.

I walked toward the well.

I Leaned over and pushed aside the wet, heavy snow. There I saw it: her white face in the well's dreadful depths, one hand pressed against the icy surface. She was even more beautiful in flesh than she had been as a wraith.

I know what to do.

At the end of the story, Janes informs us that this was based on a true story, a crime in which the accused was defended by Alexander Hamilton and Aaron Burr, but interesting as that is it has little to do with the sad, grimy story we've just read. I did think at the time this would be a feature of every story: Here's How I Thought This One Up. But no, that happens only one other time, and in fact one or two stories, such as "A Fitting Tribute", with its supernatural cruelty, don't need to take place in New York at all. I'll takes Janes' word on it that it does, but it doesn't need to be, and doesn't much matter one way or the other.

Not so others, though. Possibly my favorite story is also based on fact, and it's called "The General Slocum", about a horrific 1904 ferry tragedy that cost around 1,000 people, mostly women and children, most from a single community, their lives ("When the fathers of the community returned home from work, that night, they learned that their wives and all their children had drowned.") To this material, Janes connects a particular and very famous fairy tale. A maybe obvious choice, but she takes an already rather chilling fairy tale and renders it hideous:

They have forgotten all that I have given them, all the stories I have told them, all the bargains they've struck with me. Their ancestors forgot our bargain once, a long time ago, and I drowned their children in the River Weser. 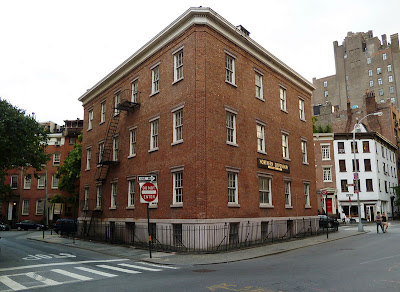 Also inextricable from its New York setting is "The Northern Dispensary" (the building pictured above). This is also a modern story about a woman named Bailey Parker who scrapes up a living as a tour guide of historical New York. One of her favorite sites is the title location, a now-closed former medical center that provided care to the poor, including, Bailey initially delights in telling her uninterested customers, Edgar Allan Poe. The story goes weird places -- Bailey is also an actress who seems on the cusp of landing a lead role in a Boardwalk Empire-type HBO series -- that have no link to the dispensary, yet that sad place is always there, leading us to a bizarre and gruesome ending. I really like the story's strangeness, but a curious think about "The Northern Dispensary" is that, despite being one of the longest stories in the collection, it's also one of the most rushed. There is much more Janes could do to fill this out -- it's not necessary to plow so headlong towards your conclusion. Also, Janes' style is generally very plain-spoken. This is often good -- I don't view the easy style of her period stories as symptomatic of a lack of ability. One story has a line near the end, "I deeply regret the loss of my bag of gold", that is rather hilarious in a way it would not be if the language was more adorned. But in her contemporary stories, I do sense a some flailing.

This is most apparent in "The End", the weakest story in Boroughs of the Dead. This one is more of a black joke, an over-the-top story about a lazy beach vacation that takes a crazy turn towards the bloodthirsty occult when Grace, the main character, meets Joan Hassell, a famous mystery writer into whose friendly acquaintance Grace nervously and shyly tries to insinuate herself. She'll wish she hadn't, and "The End" is rather nasty in a casual sort of way, but boy it gets to its climax really quick, seemingly jumping steps and not taking the kind of time that would have avoided having the whole premise of the story's horror spill out in a speech of the "Now that you're about to die, let me tell you everything" sort that simply never, ever works, and can't work, unless you're making fun of it, which can't work anymore either because it's been made fun of endlessly. What we learn is going on is pretty ridiculous, but that doesn't matter. It could have worked. An impatience, or a discomfort with the modern-day, on Janes' part cuts it off at the knees.

Janes herself may flat-out say what the problem is here. In "The Northern Dispensary", Bailey -- a character my research tells me may share some experiences with Andrea Janes -- is told in her audition for HBO that the show will be set in the 1930s. Janes writes:

"Oh that's great -- I love history, anything old-fashioned." This actually was true. Bailey loved vintage clothing and the musty smell of used books. She smiled at the thought of costumes she'd get to wear if -- no, when -- she got a part on this show.

Well, I love all that stuff, too, minus the costumes, and I feel as though, if given her druthers, Janes would write in the mode of "A Fitting Tribute" and "We'll All Be in the Arms of Our True Loves Before Long" and "The General Slocum" exclusively. Was she warned against this, for commercial reasons? I have no clue. I have no clue if I'm right about any of this, and anyway the market for short horror fiction ain't too strong, so my own unsolicited advice would be to, as Fat Tony once said, listen to your heart.

Let us not forget that Boroughs of the Dead was self-published, after all. Which seems to be sort of a kind of whole thing with horror fiction these days. So much horror fiction, both the good and the bad, but especially the best, like Reggie Oliver (boy I mention him a lot, don't I? Well, if you possibly can, find his story "The Complete Symphonies of Adolf Hitler" and read that sucker) is, not self-published, but either in new small independent presses, or specialty presses like Centipede Press. From my dealings with Centipede, I feel like outside of the actual putting together of the physical books (which are gorgeous -- expensive, but gorgeous) that there's one dude handling the whole deal. The line between independent publishing and self publishing can become pretty hazy. And that means that there could be good stuff hidden away somewhere in the least likely, most degraded corners of that world. Quite frankly, I'm not sure I feel like digging. It's just too much, and it's too unlikely to bear any fruit. But if I hear about something, something good like Tales of the Callamo Mountains by Larry Blamire, or Boroughs of the Dead by Andrea Janes, then count me in.
Posted by bill r. at 8:13 PM

Labels: Andrea Janes, Boroughs of the Dead, The Kind of Face You Slash