The Kind of Face You Slash - Day 15: The Great Kitchen 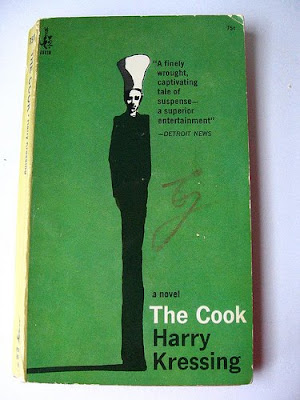 Say what you will about Bentley Little's fiction (as I have done), but the man seems to have very good taste. Of the ten novels chosen by Little for his submission to the 2008 book The Book of Lists: Horror, called "Bentley Little's Ten Horror One-Hit Wonders That Everyone Should Read", I've read seven, I've liked six, and of those I think four are flat-out brilliant. Two of them I'd never heard of until reading Little's list, the first being Joan Samson's The Auctioneer which I wrote about last year, and the second is Harry Kressing's The Cook, a novel I finished reading earlier today.

The books on Little's list were written either by writers who only wrote one horror novel either because it was a fluke in their career, otherwise made up of other kinds of novels, or because, for one reason or another, they only wrote one novel. Joan Samson died shortly after The Auctioneer was published, for example. In the case of Harry Kressing, many other novels may well have been written by the same person, and many of them may have even been horror, but it's possible we'll never know. The last page of my 1984 edition of this 1965 novel, and no doubt all other editions, says only this:

Harry Kressing is a pseudonym.

Well, what more is there to say, but at the same time, those five words surrounded by blankness comes off as sort of sinister, especially coming immediately after the book it's attached to. According to Little:

"The rumor in the early 1960s was that this was John Fowles writing under a pseudonym...and Fowles blurbed the book, which was thought at the time to be a clever bit of self-referential post-modernism. It turned out that Kressing wasn't Fowles..."

How do we know that? From what I've seen, Kressing's real identity has never been revealed, so what's the proof that he wasn't Fowles? Did Fowles say "Nope, not me"? My own instinct tells me it isn't Fowles, only because I read The Collector, and The Cook is loads, loads better.

So what is this book, exactly? Well, it's a brief novel, 244 pages in paperback and made up mostly of very short chapters. It has the air of a story being related to you, almost like either a fairy tale or a parable, though what the moral would be I couldn't tell you. The Cook tells the story of Conrad, a cook, who applies for a job as personal cook for the Hill family. The Hill family shares a status as the richest and most respected family in the town of Cobb with the Vales, with whom they have a long history of feuding, though by the time the novel begins this has cooled considerably. What feud remains manifests itself as a competition between the two clans over who has the better cook, and in fact the families, who were once intertwined, would like to be joined again, through the marriage of the Hill heir, Harold, and Vale daughter Daphne. Once this happens, both families will be able to leave their respective mansions and move as one into the massive castle which the families once shared, known as the Prominence. When we first meet Conrad, before he has been seen by a single soul in the town of Cobb, let alone anyone from either family, he is walking around the base of the hugely steep hill atop which the Prominence sits:

After circling the most several times he sat down and looked at the castle. It was essentially Gothic, constructed of blue-gray stone, rising in hexagonal design some four stories from the ground. It was very big, about two hundred rooms. It was also in an excellent state of upkeep.

The grounds were also beautifully kept.

Several miles in the distance a small town, spired and pastel-shaded, nestled in a wooded valley.

"That must be Cobb," Conrad thought.

He would ask someone in Cobb about the castle.

That passage, which is on page two, should give you a good idea of the prose style. It is very plain, although, as that sounds negative, perhaps "clean" conveys what I mean better. Kressing is somehow able to build an atmosphere of dread throughout the book by apparently never doing anything. The simplest phrases take on a foreboding vibe purely through context. Nothing is forced, the manipulation completely invisible. I mean, I guess it's invisible, because it has to be there, because The Cook is a fictional construction and therefore by definition manipulative. But I don't know that I could point to an example anywhere in the novel.

What that passage might give you the wrong idea about is how Kressing treats the inner lives of his characters. Now, Conrad gets the job as the Hills cook, of course, and Conrad also must count as our point of view character -- he's barely ever off-stage. But his thoughts, his motivations, and, for the most part, his emotions come across only, again, through what is happening. In some ways, Conrad is very much a surface, not character, but person. If Kressing writes that he's smiling, you can assume he's smiling sincerely. Conrad, the cook, unlike The Cook, the novel, is deeply manipulative, but if he ever lies, like bald-faced lies, then he does so very, very rarely, and I can't think of a single instance of it in any case. 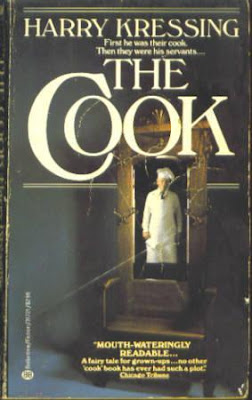 And what is Conrad's manipulations in aid of? And if he doesn't really lie, how does he do it? To answer the second part first, he uses food, and insinuation, and self confidence. The food thing is interesting, because The Cook is actually not really a food book -- what Conrad makes is described as magnificent, better than anything anyone has eaten before, but Kressing only says that he's making roasts, or soups, or sauces, or biscuits. What it is is less important than what it does, and what it does, apparently, is addict those who eat it so that any other food disgusts them, and it effects their weight. Both ways. If you're too skinny, it will make you gain weight. If you're fat, it will make you lose weight. No matter how much you eat, by the way -- you can gorge yourself on Conrad's food, as poor, heavy Daphne Vale does, and still shed pounds like mad.

"I've sent Betsy [the maid] to bed," Conrad went on after a moment. "She'd be at it all night, and then be of absolutely no use tomorrow. Harold was too tired to help. He worked very hard this evening."

Mrs. Hill pursed her lips: she had made a decision.

"Well I'm not too tired." She started toward the pantry. "Are the aprons still kept in here?"

Mrs. Hill found Harold's apron, wrapped it around her, tucked it in and made it very neat. "There!" she said. "It will do just fine. Now, I'll be back in a minute."

Mrs. Hill, remember, is the mistress of the house. Harold is her son, who has been taking rigorous cooking lessons from Conrad. Mr. Hill, the patriarch and Conrad's boss, finds himself happily pitching in as well. And Conrad wonders if maybe Betsy shouldn't be fired. Or Maxfield, the butler. Or...

The Cook would probably be embraced and easily read as a black comic satire of class issues, although boy, do I think that's an oversimplification. Not one member of the Hills or the Vales is ever depicted as rooking or oppressing or being cruel to anyone, for one thing, and then there's where the novel ends up, a grotesque and chillingly bizarre place so far away from whatever hazy upstairs/downstairs dynamic you might be tempted to root out in the beginning. So as a class satire, I wonder what The Cook could have in mind, and therefore must doubt that has a hell of a lot to do with Kressing's ambitions. Of course, it's quite possible that the current low state of satire is causing me to badly underestimate the breadth of Kressing's own definition of the word. This is borne out by my belief that the artist's work The Cook most closely resembles are, in fact, the class satires of Luis Bunuel, The Exterminating Angel more than anything else, but few people would be content to talk about that film as simply a class critique -- it would be like saying The Milky Way is a satire on religion and act as though this somehow told the whole story (and what the whole story actually is with that one is something I'm still working on).

Conrad, we will learn, is probably not of a class lower than the Hills, and may in fact come from some higher societal realm. And the laborers are dispensed with by him with as little care as the most mustache-twirling union buster. But who suffers more, the Hills, the Vales, or the Maxfields and Betsys? Well, I know the answer, actually, and in any case I resist the urge to reduce The Cook to something easy. It's wonderfully suspenseful, though, and thrillingly original, and finally, in its quiet, casual way, even shocking. Not to mention out of print and largely forgotten. So it goes.

Quick note: The Cook was adapted into a film in 1970 under the title Something for Everybody. Directed by Harold Prince, screenplay by Hugh Wheeler (who apparently had a habit of writing under pseudonyms, so hmmm....) and starring Michael York and Angela Lansbury, and featuring not one character who bears the name of any corresponding character from the novel, Something for Everybody was released on VHS, but never on DVD. Anybody out there seen it? I can't imagine it follows the novel very closely, at least not by the end.
Posted by bill r. at 7:29 PM

Sounds right up my alley, really it does. Besides, not only is it quietly creepy and totally obscure - it's also mouth-wateringly readable!

I don't know about the "mouth-wateringly" part (oh I get it, because of food) but that blurb isn't wrong. The only reason I didn't read the whole thing in one day is because I had other shit to read. But it does read like a breeze.

The actual title of the film is SOMETHING FOR EVERYONE and it's up on YouTube, for those inclined to check it out.

I knew Harry Ruber at LSE in the mid-fifties. He was a graduate student in economics. He gave me a copy of The Cook which I still have dedicated to me, his 'Best Friend at LSE' but signed as Harry K. He had intended to write a follow-up called 'The Dentist'. I really would like to touch base with him, but we are both rather aged now.

Regrettably, Anonymous, touching base with your classmate must wait. Harry Adam Ruber died in December 1990 in Minnesota according to the helpful LDS folks at familysearch.org (Minnesota Death Index).

I met Harry Kressing at a pub called the Norfolk Arms in London's east end. I was spending a couple of weeks as a college student from Mankato State University and earned come political science credits while there. A group of us would frequent the pub which was near where we stayed at a hotel/boarding room called the Devonshire Inn. Anyways, Harry was a pleasant fellow and told us he was an expat married to a Brit (I think she was a psychologist or in a similar profession).

He was witty and regaled us with stories without braggadocio, but did mention that he penned "The Cook". He would write for several hours there and have a few pints, etc.