The Kind of Face You Hate - Day 11: Let Us Destroy 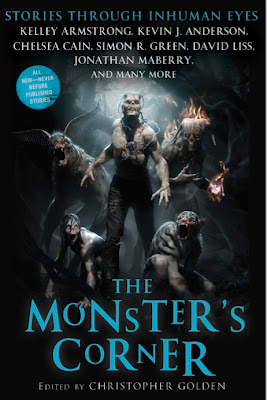 Now comes the time in this series when I just start grabbing at all the new anthologies I picked up in preparation for October and start, like, reading them. This generally lasts three or four days. Three or four quite fruitful days, I'm hoping, because there are some interesting, or potentially interesting, ones in the mix. For instance, today's book, called The Monster's corner, edited by Christopher Golden. It features stopries by several of your hottest young-ish horror writers, and has a solid core theme, to boot. In his introduction, Golden gives you the gist:

As my literary interest grew, I found myself gravitating toward such [sympathetic] portrayals of monstrosity again and again. I read Mary Shelley's Frankenstein at last, and finally realized something that I had known in my heart for years by that time -- the monster was the hero. The monster was the protagonist. Though the story might be structured otherwise, the language and characterization made it an inescapable truth.

I think Golden is slightly missing how completely Victor Frankenstein fits the bill, but otherwise point taken. And that, in essence, should tell you what kind of stories one should expect from The Monster's Corner. So going into this, I was thinking I might read a story about a married couple who wake up in the morning and lovingly kiss each other and then go eat breakfast and get their kids ready for school and the parents make the kids' lunches and pat them of the heads and put them on the bus and the dad gets ready for work, and while doing so he looks in the bathroom mirror and the story ends: "And he was a goblin all along." You know, something really good like that.

But no, Golden and his writers had quite different ideas, to the point that one of the two stories I read has nothing whatsoever with Golden's stated premise. That story is called "The Other One", by Michael Marshall Smith. Smith is a writer who wants to be clever like Iain Banks, because Banks writers what I guess might be called "literary thrillers", of a very odd sort but we'll stay with that, under the name "Iain Banks" and hard science fiction under the name "Iain M. Banks." It's just a simple way to divide the two parts of his bibliography without going for a full-blown pseudonym. Smith does this too, by writing thrillers under the name "Michael Marshall", but so far I haven't detected anywhere near the difference among his work to justify the confusion (just a quick note, "Iain Banks" and "Iain M. Banks" doesn't fuck up anybody's bookshelves, just so you know). Smith wrote science fiction early on, but hasn't written anything in that genre in a while, so I can no longer see the worth of this decision. But whatever. I actually like Smith. Though I haven't read the third and feel like I'd need to reread the first two books in order to do so, I have so far thoroughly enjoyed his pretty much insane ancient-serial-killer-cult thriller series that began with The Straw Men and has continued with The Upright Man and Blood of Angels. The Upright Man has sasquatches in it. That's all I'm going to say. 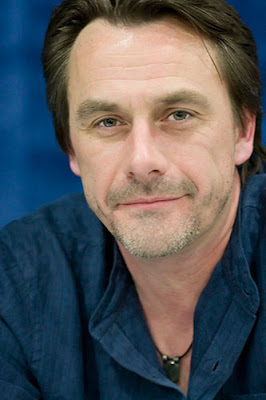 So I approached "The Other One" with no little interest only to be disappointed twice over. First, it's not any good. Second, I can't detect even a passing resemblance in it to Golden's idea. There isn't a monster to be found in it. Something supernatural is going on, and in fact it belongs to a very specific subgenre of horror, or supernatural stories anyway, that I can't name without giving away the ending, such as it is, but there's no monster. And the only character we really have is not sympathetic. She's a thirty-eight-year-old woman named Kerry who, when we meet her, is flying back to England from Washington, DC, where she attending a friends' wedding, and also partying it up and cheating on her boyfriend Richard. Who's an asshole, though, so that's okay (honestly it is, I'm not really being saracastic). Also, and this is going to come off as some weird off-topic tangent, but "The Other Woman" put me off quite early when Kerry mentally bitched her way through airport security. I guess I'm supposed to be nodding to myself in agreement with Kerry and, more to the point, Smith, who can't believe this security woman has the gall to do the job she's being paid to do, and the whole seen makes me think that Kerry -- oh, okay, that Smith -- is the kind of person who is able to think, depending on which better suits the situation, both "How dare they search that person, that's profiling" and "Oh for God's sake, do I look like a terrorist?"

Plus, what's this shit:

Nobody hated anybody else's choice in music anymore, either...Noboday had the backbone to truly hate anything, these days: They were too busy liking -- Facebooking or tweeting whatever track they were listening to...

Etc. But so, do they have a different internet in England than the one we have here? Because if so, theirs sounds a lot nicer. Which...okay, I just realized that now I look like the asshole here.

There's not much more to say about "The Other One", frankly. I can't examine it on the terms Golden laid out because it's not that kind of story, and it's also a twist story, which means it plays like some kind straightforward tale of early mid-life angst until the supernatural makes Kerry think that she should have been braver about her life choices but now it's too late. In short, I do not know why this story was in this book.

Meanwhile, Gary A. Braunbeck's story, "And Still You Wonder Why Our First Impulse is to Kill You: An Alphabetized Faux-Manifesto transcribed, edited, and annotated (under duress and protest)" is more like it. I guess. After reading that title, it probably won't shock you to learn that Braunbeck's story is a bit on the odd side. It brings to mind Steve Rasnic and Melanie Tem's The Man on the Ceiling, Thomas Ligotti's "Notes on the Writing of Horror: A Story" as well as, more clearly, Harlan Ellison's "From A to Z, in the Chocolate Alphabet" and "The Deathbird", the former because like that story, Braunbeck's "And Still You Wonder Why Our First Impulse is to Kill You..." is a series of fragments about whatever word he's associated with the next sequential letter in the alphabet (A is for Abomination, B is for Bogeyman, and so on). Then on top of that is the gimmick that Braunbeck is writing all of this under threat of death, his and his family's, under the supervision of a great host of monsters, all the monsters ever it would seem, who are sick of how their lives and ancient existence and powers have been subverted by our, humanity's, use of them, and of the language used to describe them. And then there's the awful description at the beginning of the death of Braunbeck's cat, Ruben, given instant end stage feline AIDS and leukemia by the monsters as proof they are serious:

And if you found that hard to read, imagine how I felt having to sit there and watch it happen, completely powerless to ease even an iota of his suffering.

I wondered if maybe this, the death of his cat named Ruben, was perhaps true and was being filtered in, which made me think of Ellison's brilliant "The Deathbird" in which Ellison inserts a completely nonfiction, short memoir piece about the death of his dog, Abu. 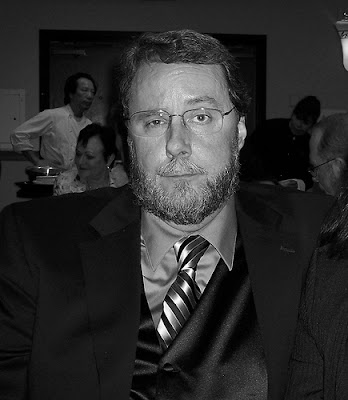 So there's a lot going on here, referentially speaking. Braunbeck is a very prolific writer, and rather beloved in a cult sort of way. I read his novel In Silent Graves, supposedly one his major works, and I confess I was not a fan. Despite some really awful -- in the good sense -- imagery early on, that novel began to drift into fantasy pretty quickly, and not to the novel's benefit. This story has its share of problems as well. For one thing -- it's frankly debatable how much of a problem this really is -- the gimmick of the story, specifically the monsters supposedly hanging over Braunbeck, trying to make their demands known, never really come through in a way that Golden seems to be intending in this anthology. I never sympathized with them, in other words, because it's all too abstract and post-modern. But that's a nitpick at best, as I'm not sure that kind of suspension of disbelief is really an aim here. Worse, for me, is some of the points Braunbeck is trying to make. Similar to my objections to the Max Brooks story from last week, Braunbeck tries to take a jab at epistolary horror fiction by making stuff up:

[Author's Note: Yet have you noticed that the narrators of these stories always seem to have time to write "Gaaaah!" or "Arrrrrrgh!" or something like that?]

Well, actually, no, I haven't. I did notice that this was a joke in Monty Python and the Holy Grail, and that, for instance, Geoffrey Household's Dance of the Dwarfs, which takes the form of the narrator's journal, ends mid-sentence. What pray-tell are you referring to? There's also a passage involving Braunbeck and fellow horror writer Tim Waggoner eating at McDonald's and comparing the other customers to the children from The Midwich Cuckoos/Village of the Damned. Look at the people who eat at McDonald's! Thank God we're not like them. Anyway, that's what comes across, whatever Braunbeck thought he was up to, and it's cheap.

But there's much to praise, too. "And Still You Wonder Why Our First Impulse is to Kill You..." is relentlessly chatty and weird and maybe not even a horror story, but a horror story about horror stories. If Braunbeck himself sounds up his own ass here, I would think it's impossible to write a story like this and not sound that way. Even if he's occasionally too jokey here, Braunbeck's actual prose is generally much, much better than what I encountered in In Silent Graves, in large part, I suspect, because the total lack of any kind of boundaries inherent in this sort of thing instill in him and the story with a great deal of energy that you can absolutely feel as you read. As plain as the comparisons to Ellison might be (and yes, I bring him up a lot lately, but there was truly no choice in this case), and Braunbeck actually includes an acknowledgments section where he tips his hat to Ellison, there was still a sense while reading "And Still You Wonder Why Our First Impulse is to Kill You" that I didn't quite know what this was. I'd say that's too rare an experience.
Posted by bill r. at 12:13 PM

I feel like Michael Marshall Smith is hit and miss. Just read a short story of his the other day, though, "What Happens When you Wake in the Night," which I thought was simple but quite good.

He is good. I liked the two novels I mentioned and really look forward to reading more, but this story just felt like nothing.