The Kind of Face You Slash - Day 29: God Hates a Coward

There is a lot of horror fiction I have not read. This goes without saying, I suppose, but I mean that there is a lot of horror fiction that I should have read by now that I haven't. This fact is driven home to me on a regular basis, just by seeing names of writers like Seabury Quinn, and thinking "Who?" Yeah, well, if I was the kind of guy who was actually qualified to write about horror as often as I do, I wouldn't be asking that question. And yet here I am. One of the pluses of doing this -- and it's a plus enjoyed only by myself -- is that I have an excuse to systematically fill in these gaps while leaving lots of time free (most of the rest of the year) to read whatever else I feel like. Today is one of the days where I felt a strong urge to fill some gaps. 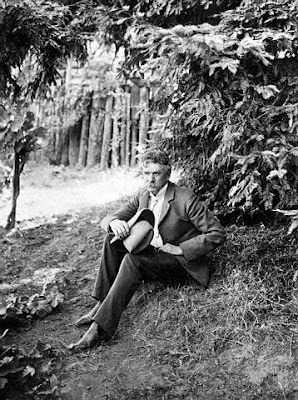 And neither of those gaps is named Seabury Quinn! I know, perverse, right? But I've been putting off reading any of Ambrose Bierce's straight-up horror fiction, as well as Robert E. Howard's famous "Pigeons from Hell", for a very long time, but I've ended that negative streak. As it turns out, Bierce's "The Damned Thing" and Howard's "Pigeons from Hell" make a nice pairing. The title of this post, apart from being a very old phrase, is used in the Bierce story, but applies to both. In each story, a regular fellow, like you and me, finds him facing some immensely powerful supernatural force, and instead of running they steel themselves for a showdown. This works out better for one of the guys than it does the other, but Bierce's man, Hugh Morgan, who is dead on a table while his inquest plays out around him, has no help. There is no reason why this is happening to him, specifically -- and what "this" is, is an invisible thing, a "Damned Thing", he calls it, wandering the grounds of his home and terrorizing him -- but he will try to deal with it. He even finds a solution, of sorts, though it doesn't save him. It is extraordinarily Lovecraftian, though, even blatantly Lovecraftian, except that doesn't quite work when you consider that Bierce himself disappeared (forever) three years before Lovecraft ever published a word.

My experience with Bierce before reading "The Damned Thing", his most famous straight horror story, was a college reading of his black-as-night Civil War story "Chickamauga", and a knowledge of the entire plot of "An Occurrence at Owl Creek Bridge". I don't even really know if I've ever read that story, though I suspect I haven't. It's just one of those stories that everybody knows, one way or the other, not least because, judging by the current state of American genre films, it must be counted as one of the most influential short stories of...ever. But mainly I knew Bierce's wonderful and caustic The Devil's Dictionary, a short mock-dictionary featuring definitions like:

ACHIEVEMENT, n. The death of endeavor and the birth of disgust.

RADICALISM, n. The conservatism of to-morrow injected into the affairs of to-day.

The idea behind The Devil's Dictionary seems to have been to carefully identify and label each kind of hypocrisy that human beings are capable of. This sort of thing, along with stories like "Chickamauga", led to the always-clever press labelling Bierce "Bitter Bierce". It had been my belief before today that whatever "horror" Bierce wrote was closer to "Chickamauga" -- horror by way of stark reality -- than "The Dunwich Horror". Even a title like "The Damned Thing" couldn't quite dissuade me of this belief, but anyway, I was wrong. "The Damned Thing" is unambiguously a horror story, with an ending that must have influenced Lovecraft in its specifics, but in the cosmic philosophy it implies. Lovecraft is known to have been a reader of Bierce, and considering the shadow Lovecraft casts over an entire century of horror literature, "The Damned Thing" begins to take on an amazing significance. Put it like this: if modern horror fiction is a disease, "The Damned Thing" is Patient Zero. Combine that with "An Occurrence at Owl Creek Bridge" and you see what an enormous figure Bierce really is.

Robert E. Howard's influence is similarly huge, but, being the creator of Conan, his influence was in the world of fantasy -- dark fantasy, to be sure -- more than horror. Still, Howard wrote in the genre a great deal. The 500 page The Horror Stories of Robert E. Howard is proof of this. Reading "Pigeons from Hell" (not just my first horror story by Howard, but my first Howard, period) now, you can practically feel the pages of the pulp magazine (Weird Tales, this would have been) as you turn the pages. Of all the stories I've read in the four years of doing this series, or, frankly, the thirty or so years I've been reading horror, the one "Pigeons from Hell" most brings to mind if Hugh B. Cave's "Murgunstrumm". This isn't because the two bear any story similarities, or even thematic ones outside of those inherent to their shared genre, but both positively reek of pulp. Lurid and violent and refusing to waste any time, "Pigeons from Hell" (an unfortunate title from today's perspective, as it sounds like part of a Richard Lewis bit from 1986 about what a pain in the ass Central Park has become) includes, in its first few pages, this:

Yes! The figure had moved into the bar of moonlight now, and Griswell recognized it. Then he saw Branner's face, and a shriek burst from Griswell's lips. Branner's face was bloodless, corpse-like; gouts of blood dripped darkly down it; his eyes were glassy and set, and blood oozed from the great gash which cleft the crown of his head!

Italics Howard's, needless to say. The story is something of a zombie tale, or more precisely a "zuvembie" tale, which we learn is a sort of witch that creates and controls zombies. Poor Griswell is just an innocent New Englander travelling with his old friend John Branner in search of "vacation pleasure"(!) in the South, where the, to my mind, not great decision to bed down for the night in an old abandoned house leads to the death of Branner, and Griswell nearly being arrested for his murder. The sheriff who discovers the terrified Griswell is a smart man named Bruckner, whose logical mind is quite satisfyingly portrayed by Howard. Earlier this year, I read a book called The Manitou by Graham Masterton. This book is about an evil American Indian spirit who is returning to the earth by growing as a tumor in a woman's neck. The characters who come to believe that this is actually happening do not necessarily need to see it with their own eyes. One man, an expert in Indian mysticism, is consulted and told "This is really happening" and his reaction, more or less, is "Well, I never believed in it before, but I hardly think you'd lie about something like this. I'm in!" By contrast, Bruckner has to wrestle with a lot of conflicting information, but he's not going to commit himself to any one answer until he sees proof. The pulps rarely concerned themselves with this sort of thing, so Howard's commitment to it is deeply refreshing. Of course, Bruckner gets his proof, which supports Griswell's wild and eerie story about something on the stairs with a yellow face, and his friend's split-open head that nevertheless did not keep him from pursuing Griswell with a hatchet. 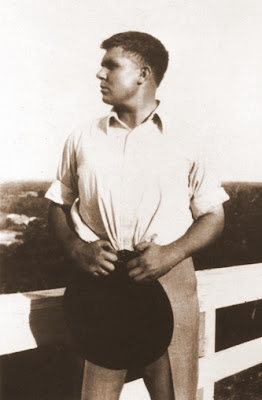 There is much that is quite eerie, in fact, in the first half of "Pigeons from Hell". What Griswell and Bruckner find in the house, upon their initial search, is as creepy as any reasonable person could hope for. Once the backstory, the solution to it all, starts to kick in -- it involves brutal slave owners, lost fortunes, and revenge -- "Pigeons from Hell" begins to lose steam. Twas ever thus, I suppose, but the truth is I began to lose steam myself as I read. Its grip loosened, let's say. The chill wears off when you follow it with all the whys and wherefores. It's a little bit like telling a joke and then saying "Now let me tell you why that's funny..."

This is not a problem of Howard's, per se, but rather of this particular form, which is the horror story as whodunnit. This is a very popular form, was in the pulp era, is now, and whatever pleasure I take from it is relatively meager. I can enjoy the story, I can enjoy the pre-solution horror, I can enjoy individual sections, but I'm also going to drift after a point, as I did here. Plus, and I hesitate to bring this up, but...look, I have a limited time every day before this posts have to go to "press", and "Pigeons from Hell" is a long-ish story, one that's hard to thoroughly review in the time I have. So I don't know for sure if the thunderously big plot hole I think I detected at the end is really that -- and I did reread portions to see if something hadn't sunk in for me -- and not a miss on my part, due to the story losing me, and a sense I have that if I have to do this for one more day, I swear to Christ...

This enormous, possible mistake is tough to talk about without spoiling the ending, so I'm asking anyone who knows the story well to help me out here. Neil Sarver? Any help?
Posted by bill r. at 5:35 PM

Howard usually got to the grue pretty damn quick, and often was a bit sloppy in plotting, another pulp handicap, and "Pigeons from Hell" has all that's a plus and minus in his work; that said it's still a great little piece. Try to catch the TV episode of 1961's "Thriller" this was adapted for - it's possibly the best horror shown on TV.