The Kind of Face You Slash - Day 9: A Subterranean Voice 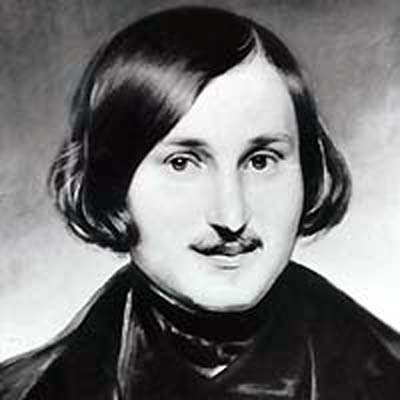 Nikolai Gogol, pictured above looking like a more on-the-stick Edgar Allan Poe, died in 1852 at the age of 42, with the bulk of his literary legacy centering on eighteen short stories and one incomplete novels called Dead Souls. There is a scattering of fragments and poems, plays, and essays, but essentially Gogol survives on those stories and the unfinished novel. Sparse though that output may appear, Gogol currently enjoys a reputation as the Russian master preferred by those who've read all the other Russian masters. Less concerned with ground level realism than many of his more famous contemporaries, Gogol bears a closer resemblance to, say, Franz Kafka than to Tolstoy or Dostoevsky, which allows, as it would with Kafka, for approaching at least some of his work from a genre angle. As I've said before, I use this October project as an excuse to both read writers I haven't yet gotten around to, and also as an excuse to put off reading them, which is why today I find myself writing a post about Nikolai Gogol, with whom I've had no previous experience. I can perhaps also use that as an excuse to keep it short.

A quick note before continuing: I have here the Vintage Classics edition of The Collected Tales of Nikolai Gogol, which I bought, in my ignorance, under the assumption that "collected" was synonymous with "complete." Not so, it turns out, and I'm a bit put out by that, so maybe be more clear in the future, Vintage, maybe call the next edition Most of the Tales of Nikolai Gogol or something. At least they were good enough to include the story I needed for today, "Viy" from 1835. "Viy" is most unusual. In his preface to the Vintage book, Richard Pevear refers to this story as among the "most traditional" of Gogol's work, while also acknowledging that certain aspects of the story's ending are "most untraditional." In other words, at some level "Viy" is a head-scratcher, though ultimately a superbly satisfying one.

Briefly, "Viy" begins by seeming to be the story of three university students, one a theologian, one a rhetorician, and one, named Khoma Brut, a philosopher, and their journey by foot to their respective homes during a school holiday. I assumed the story would involve some series of ghostly occurrences during this journey, and indeed very soon they become lost on a very dark night, but rather quickly the three find a farmhouse inhabited by an old woman who reluctantly agrees to take them in, with the provision that the three be split up at bedtime. This places Brut in the sheep pen, where his rest is interrupted by the old woman:

Suddenly the low door opened and the old woman, stooping down, came into the pen.

"Well, granny, what do you want?" said the philosopher.

But the old woman came toward him with outspread arms.

"Oh-ho!" thought the philosopher. "Only no, dearie, you're obsolete!" He moved slightly further off, but again the old woman unceremoniously came toward him.

"Listen, granny," said the philosopher, "it's a fast period, and I'm the sort of man who won't break his fast even for a thousand gold roubles." 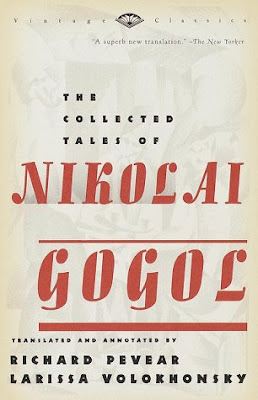 Up to this point, and off and on through the rest of it, "Viy" has had about it the air of a robust and slightly bawdy folktale. This means, almost by definition, that it is also rather light-hearted and sardonic towards its characters and institutions. But here Gogol has introduced his central character, the old woman who we will learn is a witch, and actually a young woman (or is that her true form?) and the daughter of a wealthy landowner. His terror at the idea of sexual congress with this old woman leads Brut to fight and injure the old woman, and he will later learn of her status as both beautiful young woman and wealthy heiress when he is summoned to read prayers over her before and after her death, which is fast approaching. The request was made by the young woman herself.

Around now the horror of "Viy" is introduced, and what's most striking is that, in its folktale style, the story also takes on a folktale's callousness (its blend of easy humor, almost repressed lustiness, if that's even a thing, and old world horror can make "Viy" occasionally feel like a precursor to Polanski's The Fearless Vampire Killers). The horrible stories Brut comes to hear about what this witch is capable of is related in as offhand a manner as such things can be:

Folk and fairy tales routinely dispense with people just as coldly, as a more than necessary sacrifice to the relentless chugging engine of their narrative. It is for this reason, perhaps, that we sometimes forget how brutal such stories can be. For his part, according to Pevear, Gogol claimed that "Viy" was simply his restating of a folktale he'd once heard, but, also according to Pevear, "Viy"'s astonishing climax was completely original to Gogol, the source of that astonishment, as well as the story's title, having "no source in folklore." It feels at times as though some mixture of Gogol's coy assertion that "Viy"'s narrative had nothing to do with him, and his related decision to write the story as if his claim was entirely true, brought out a kind of creative giddiness. For "Viy" is not a great example of the old rule that in short fiction not one word must be wasted ("Viy" is not really that short, but that's still the format Gogol's working in) as great sarcastic slabs of the beginning have little to no bearing on what will follow. Similarly, the sexual connection between Brut and the witch might help explain the witch, to some degree, but it has nothing to do with what Brut eventually finds himself up against.

But it's all Gogol, and the ending is a masterpiece of horror imagery. I refuse to quote any of it, but I will say it is completely surprising, and as chilling a group of images and paragraphs as I've read in the genre in a very long time. There's also the wonderfully shivery realization that the explanation of the title, "Viy", can make the reader wonder why it was called that and not something more obviously relevant, but then think that if Gogol thought it was more than relevant enough, then what does that relevance mean??

It's just terrific. Even inspiring, in fact, because as a horror story, at least as too many understand it, "Viy" breaks all the rules that some moron attached to the genre as the years have past since writers like Gogol and Poe wrote without a thought towards satisfying "genre conventions." You cannot, even as a jaded horror fan, predict where "Viy" goes, because Gogol has neither signalled it or thought that perhaps he should. He trusted his formidable imagination, and unlike so many who claim to know what they're doing, he was right to do so, and it is all to our benefit. To the genre's benefit as well, if only anyone would take note.
Posted by bill r. at 2:36 PM

Labels: Nikolai Gogol, The Kind of Face You Slash, Viy

Back in the gray, unimaginable days before the internets, I read lots of the classic Russian authors (Pevear & Volokhonsky being my fave translators too). Gogol had some *great* short stories, but I've read neither "Viy" nor DEAD SOULS. Really good post, Bill, and one that makes me want to read the tale. I know that Bava based BLACK SUNDAY on it, loosely, of course.

Man, I haven't seen that movie in so long, and I didn't even know that! Absolutely time for a rewatch.

This essay really lifted my eyelids.

I finally read "Viy" last night. Yowza. You nail the genius of it: rambling, bawdy folk narrative takes a stomach-churning turn for the proto-Lovecraftian. My expectations were constantly undermined. Something about that climax conjured "The Court of the Crimson King" and now it's stuck in my head.

After "Viy," I flipped to the front of the book and was pleasantly surprised to find that both "St. John's Eve" and "The Night of Christmas Eve" are in a similar vein. More straight forward in their construction ("Viy" certainly takes the scenic route to get to the meat of the story), but equally unnerving.

And I call bullshit on the whole 'collected stories' thing, too. I own two 'complete stories of Flannery O'Connor' volumes with different contents. We need to lobby for truth in anthology labeling.