The Kind of Face You SLASH!!! - Day 20: Her Flesh was Like Putty and Tasted of Soap

If memory serves, the first time I ever came across the name Tom Reamy was in the "Further Reading" appendix to the wonderful, essential book Horror: 100 Best Books, put together by Stephen Jones and Kim Newman. The Reamy book in question that made that list (and the "Further Reading" list to Jones and Newman's follow-up -- and equally essential and wonderful -- Horror: Another 100 Best Books) is called San Diego Lightfoot Sue and Other Stories. As I've mentioned before, I'm attracted to books of horror fiction, or horror stories, that don't sound like horror, so that one stuck in my mind, though it would be many years before I actually got my hands on a copy.

The idea behind the Jones and Newman books is that one hundred writers are asked to pick, and write a brief essay on, their favorite horror book -- anthologies, single-author story collections, novels, etc. Although I don't doubt that Reamy's book isn't alone in having this distinction, I find it slightly curious that it makes both appendices, but wasn't picked for any of the now two hundred essays that make up both volumes. To me, this indicated that, even with all the obscure authors and books being brought back to the forefront in the essays, Reamy's book was still hanging out on the very fringe. Not forgotten, entirely, but getting there. This idea intrigued me further.

One of the reasons for this continued obscurity, if not the reason, is that, sadly, Tom Reamy died far too young, with only two books to his name. One is San Diego Lightfoot Sue, and the other is a novel, published after his death, called Blind Voices. According to his surprisingly lengthy Wikipedia entry, Reamy died, at age 42, of a heart attack, and was found slumped over his typewriter, seven pages into a new story. That last bit sounds apocryphal, like the story of Blind Lemon Jefferson being found frozen to death, clutching his guitar, but I hope it's true. "Hope" sounds like the wrong word, but you know what I mean.

In any case, I finally got myself a copy of San Diego Lightfoot Sue. It includes what then (1979) would have been a ubiquitous introduction by Harlan Ellison, which is both distressingly focused on Ellison, and astoundingly laudatory of Reamy and his work -- both typical features of Ellison's introductions to other people's books. Ellison focuses, and saves his highest praise, for every story in the book -- "Twilla", "San Diego Lightfoot Sue" and "Under the Hollywood Sign" especially -- other than "Beyond the Cleft", which is the one I chose to read. Ellison mentions it, pointing out that he, Ellison, kinda sorta gave Reamy the idea, and he says it's "terrifying", but that's more or less it. So I'm on my own. 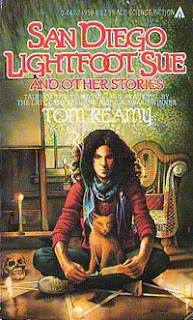 "Beyond the Cleft" is an "evil child" story. There are all sorts of these, ranging from the child-as-cold-murderer of The Bad Seed to child-as-Satan of The Omen, to children-as-packs-of-ravening-cannibals. "Beyond the Cleft" belongs to this last category, and it begins, after the briefest of prologues, like this:

At 2:17 PM on Thursday afternoon, Danny Sizemore killed and ate the Reverend Mr. Jarvis in the basement of the Church of the Nazarene in the township of Morgan's Cleft, North Carolina.

Along with being, I think, a pretty effective "grabber", as they used to call them in the business, that sentence gives you a pretty good sense of Reamy's tone and style, at least in this story. Outside of the dialogue, of which there's not a hell of a lot, the story reads almost as non-fiction. It's entirely dispassionate, nearly clinical, and all the better for it. Deaths are sudden, and not lingered over. A major character's fate is thrown away, so that the fictional death effects us, in one very small way, as a real death -- in other words, as an actual stoppage of something. We are not following this person anymore, because this person no longer exists.

Everything happens at 2:17 PM on Thursday afternoon, or rather, everything begins at 2:17 PM on Thursday afternoon. Apart from the murder of Reverend Jarvis, at the nearby schoolhouse a mass of children attack and slaughter many of their teachers, and even their fellow students -- those that haven't also been infected anyway. Like pretty much all stories that involve people suddenly going wild and attempting to consume their brethren, there is some sort of transmittable disease involved, although the specifics of it -- even much that might be called "general" about it -- is left to our imagination. At nearly thirty pages, I'm tempted to think the absence of any sort of pay-off is a fault of "Beyond the Cleft", but any time I say such things to myself, I have to quickly ask, "Well, what kind of pay-off would satisfy beyond the often phony sense of closure that mars so much modern horror literature?" Since I almost never have an answer to that, I'm forced to slink off in embarrassment.

Like "Bindlestiff", yesterday's Depression-era werewolf story, "Beyond the Cleft" is a period piece, set sometime in the 1920s or 30s, in a part of North Carolina that Reamy goes out of his way to tell is deeply secluded:

After a brief consultation with the other families, Cleatus Morgan [founder of Morgan's Cleft] decided this rich and fertile valley, though practically insulated from the outside world, was a definite windfall. So they settled in and prospered by their own standards. Indian Creek, which ran pure and bright and teemed with fish, provided power for a gristmill; the valley and surrounding heights were thick with Virginia deer, wild turkeys, dove, and quail. Little was needed from the outside.

From a plot standpoint, this choice of place and time serves to make the lack of outside help, or contact of any kind, easier to swallow. With the small populations of places like Morgan's Cleft, it's also easier, and quicker, to get across the sudden decimation of an entire community. While we never see Morgan's Cleft at its peak, Reamy does still manage to drive home the idea that an entire town, once comfortable, is being rapidly and inexplicably destroyed.

There's something else, though, something more at work when you consider that Reamy set his story some forty years before he actually wrote it, and set it in a secluded environment. The last lines of the story -- which I hesitate, mostly out of habit, to reproduce here, but you'll be able to infer the content -- make it clear that whatever has caused this living horror to take place isn't done yet, and is, in fact stronger. So what does that mean, forty years, or seventy years, later? If no one outside of Morgan's Cleft knew this was happening at the time, and Morgan's Cleft no longer exists, and this...thing can be passed along from person to person, rather easily, than what damage has it done to the human race? What effects are we now experiencing, completely ignorant that there is anything unusual going on with our species? And wouldn't this, in fact, explain quite a lot?
Posted by bill r. at 12:14 PM

One, that title sounds like a Hoyt Axton song not a horror story compilation. Two, as you brought up on The Birds post, we are conditioned to expect a solid ending . And when we get one we so often think, "You're kidding me? That's how they ended it? Oh come on!" Really, sometimes I think I would prefer most movies just pick a stopping point and roll credits rather than properly end.

Given this piece and mine on The Birds I think I'm inspired to write a piece about this now. So I probably shouldn't say much more.

Sometimes, when I'm watching a movie like Mulholland Drive, I think "Wouldn't it have been amazing if Lynch had been able to tie all that together in a way that would provide closure, without losing a bit of the strangeness or uneasiness?" And yes, it would be amazing. The obvious problem with that is that Lynch obviously had no interest in doing that. The other problem with that is how in God's name could he have managed it? Maybe there is some way, but would it have been better then what we have? People think so, or some do. I even do, sometimes. But how often does that really work? Go on, give me some examples.

Decided to search out both of Reamy's books after your write up, and did find both of them through ILL. SAN DIEGO LIGHTFOOT SUE just came in and I've started with that.

Ellison's intro mentions that Reamy did spend some time in L.A. attempting to break into the business (being one of the many sci-fi releated people to work on FLESH GORDON), and apparently had several scripts that were close to actually being made.

"Beyond The Cleft" sort of reads like it may have originally been a premise for a film. I could be wrong, but it does have that feel.

So far, I'm enjoying his work - dismayed that it took so long to discover it, but very happy to have finally done so...

Thanks entirely to YOU!