A short one today, I think, because things are probably going to get heady around here in a couple of days.

I don't know where I first read about the unusual Western anthology Razored Saddles, edited by Joe R. Lansdale and Pat LoBrutto, but I do know the rough context, and why it stuck in my head for at least a couple of years, before I finally picked up a copy. Somewhere, I came across a reference to a story by Chet Williamson called "Yore Skin's Jes's Soft 'N Purty...He Said". This story was, apparently quite, er, something -- raw, disturbing, unshakable. And it first appeared in Razored Saddles. One of the book's editors, Lansdale, had a reputation for writing similar stories, so the combination of the Williamson story, Lansdale, and the unusual focus of the anthology, led me to, eventually successfully, hunt it down. More on the Williamson story later in this post, and more on Lansdale tomorrow. 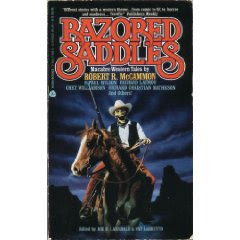 In their introduction to Razored Saddles, Lansdale and LoBrutto talk about the importance of writers writing for themselves, saying:
What we're saying is this: by not catering to the reader, a writer is much more likely to produce something interesting, something truly unique.
Readers may never respond to it as well as the writer would like. Ain't gonna lie to you. You writes your stories, you takes your chances. But odds are, and it make take some time, they will eventually respond with greater enthusiasm than they would have to your clones of other writer's work. Historically it has been the trail blazers who have made their mark, not the petty thieves of voice and style and idea.
Thus, the purpose of anthologies like this.
I'm pretty sure that "thus" should be a "hence", but otherwise, you can't argue with their logic. The potential difficulty with voicing this common sense through an anthology like Razored Saddles is that, by willfully turning the Western genre on its ear, your stories might come off a little forced. Genre hybrids are, I think, great, but more often than not they seem like a lark. Mixing crime and horror, or Westerns and horror, or whatever, tends to highlight exactly what you're doing. I wrote earlier this month about Laird Barron's crime/horror story "The Imago Sequence", and while I thought that story was largely successful, it's still true that the work of other crime writers was running through my head, as points of reference for what Barron was doing. Do Lansdale and LoBrutto think this is really the best way for a writer to break away from his or her influences and strike their own path?
It depends on the writer, of course. It depends on the reader, too, and how familiar they are with each of the genres being stitched together. In my younger, less-well-read days, I remember reading Richard Matheson's novel Shadow on the Sun, which, as it happens, is also a horror-Western, but I didn't even know there was going to be a horror element to the story at all. At the time, Matheson was writing (very good) straight Western novels, and I thought this was just the next in that line. I was jarred by what it actually was (without actually thinking it was all that good, but that's beside the point), and thought "This is something new." It wasn't that new -- this particular genre pairing has been around at least as long as the film Billy the Kid vs. Dracula -- but what did I know?
The two stories I chose to read are, I think, reasonably successful in not drawing attention to themselves as hybrids, but they do, instead, call attention to themselves as being reminiscent of another kind of horror story. Before I get to that, let me say that the stories are by Robert R. McCammon and Richard Laymon. I've said unkind things about Laymon, in passing, around here before (like, yesterday), and McCammon is a writer who, while enormously successful and award-winning and praised in his publishing heyday of the 80s and 90s, I gave up on after two novels, way back when. This may sound like I was intentionally stacking the deck against Razored Saddles, but the truth is that I picked these stories because they were the only two I could be reasonably sure would actually be horror stories (there are other horror writers 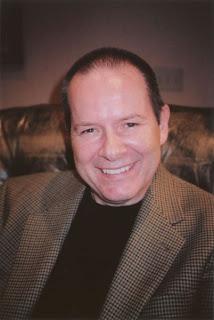 represented here, but for various reasons, not least being the need to choose my stories quickly due to the time constraint brought about by having to post every day, these stories seemed like my best options). Lansdale and LoBrutto make it clear that there are all kinds of Western stories in the anthology, but I can't be concerning myself with anything other than horror, so I was forced to pick two stories by writers I already knew I didn't like.
And they're not bad stories. The McCammon story, called "Black Boots", concerns itself with a gunfighter who calls himself Davy Slaughter (he picked that last name over his actual family name, Gartwood, for reasons that should be obvious). Slaughter is on the run from an apparently supernatural killer named Black Boots. Slaughter has already killed Black Boots. He's already killed him eight times, in fact, and feels confident that he can kill him again. The fact that Black Boots doesn't stay dead does not seem to make much of an impact on Slaughter, however, and pretty soon you realize the surreal imagery -- vultures that come apart in the air, a green sky -- is all in Slaugher's head. When he gets to a small town called Zionville, and enters the saloon, the bartender appears to have flies crawling all over his face, until suddenly the flies are gone. At that point, if not sooner, there's no doubt about what's going on.

Then who or what is Black Boots? Well, that's the payoff, in a sense, but suffice it to say that the logic of the story is maintained. And it's a good story -- creepy, unnerving, even unpleasant, but appropriately so. But it's a quick, easily digested story with the kind of climax that brings to mind the old Tales from the Crypt comic books. I remember there being quite a few period-set stories, even Westerns, in that comic, so how is "Black Boots" blazing the kind of trail that Lansdale and LoBrutto insist in the point of the whole anthology?
What's worse is that Laymon's story, "Dinker's Pond", is exactly the same thing, only more so. This story is about a pair of gold prospectors named James and George, and George's new girlfriend Lucy, who George insists on bringing along on their gold expedition. James is against this, knowing that Lucy -- who is, of course, gorgeous -- only wants to get in on the money, and isn't actually interested in George. George is having none of it, despite the fact that James tells him a graphic, implausible story about a similar pair of friends, with a similar romantic entanglement threatening their partnership, and it's ridiculously bloody aftermath.

James is right about Lucy, obviously, and he just as obviously lusts after her. One day, he finds her bathing in a pond, and tells her she should remove herself from that pond, and quick, because it has a terrible history. Lucy, naked and full of hatred for James, and his stories, tells him to go whistle, but he tells her the story of Dinker's Pond anyway, which involves a man with sawed-down teeth who ate live animals, an attempted lynching, and what parts of whom found their way into the pond where Lucy is now bathing, and why her choice to remain in that pond might not work out too well for her. And then that's what happens, and the story ends.

And it's a fine story. The kind of story that -- quite intentionally on Laymon's part, I believe -- reads as a throwback campfire story, to scare and disgust your friends with for a short period before everyone goes to sleep. And as such, it is almost exactly like the old Tales from the Crypt stories, complete with the nasty (which I don't mean in the pejorative sense) moralizing and comeuppance delivered to its most unlikable character. "Black Boots" was reminiscent of that comic, but "Dinker's Pond" could have come straight from its pages. Which, I stress again, is fine, because I love Tales from the Crypt. But new trails have not been blazed by either McCammon or Laymon, and what's even more curious is that I have a hard time believing that either writer thought they were, or cared much about, doing so. They had what they believed were good ideas for quick, mean little stories that crossed the horror story with the Western, so that's what they wrote. It's Lansdale and LoBrutto who oversold them.
One more thing, though. I'm going to break a rule here, one I don't think I told anyone about, but even new readers have probably picked up on. This whole series of posts about horror fiction is, essentially, a diary of my experiences reading nothing but horror fiction for a month. To make things interesting for myself, I've chosen, this year and last year, to only read stories and novels that I'd never read before. In fairness to Lansdale and LoBrutto, however, I do want to very quickly say that the Chet Williamson story I referred to at the top of this post, "Yore Skin's Jes's Soft 'N Purty...He Said" really does live up to the standards that the editors of Razored Saddles claim they'd set for the whole anthology. It's been quite a while since I read it -- I read it the same day the book arrived in my mailbox -- but it sure has hung with me since then. No gunfighters, no guns, even, I don't think, it instead revolves around a homosexual writer of pulp dime novels, and his quest for...something something. Read it for yourself, but it's a messed up story that is, at the same time, unpleasantly moving, and, I would say, probably very much a Western. Of a particular sort, anyway: it's own sort. Maybe when I get around to reading the rest of Razored Saddles, I'll find more stories like it.
Posted by bill r. at 12:08 PM

What are you, an English teacher? As usual, thanks for the pointers. I like short-story anthologies for quick reads that don't require a lot of investment. Sound like some good ones, even if not too original.

Anthologies are great, but I hope to lead you towards some even better ones in the days to come. RAZORED SADDLES is and interesting idea, though, and worth getting, if you can find it.

I'd look through the remaining stories of RAZORED SADDLES... Scott Cupp's Alamo story is a good one, and even David S. Schow's "Sedalia"

Thanks, L. Rob, I'll be sure to check those out.