The Kind of Face You SLASH!!! - Day 28: Tell Me Tales of Inconceivable Fear and Unimaginable Love 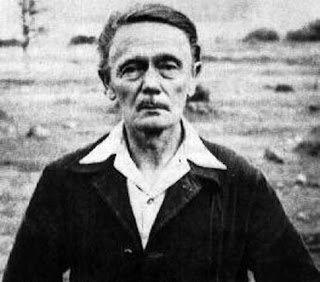 Clark Ashton Smith began his literary career as a poet, and despite devoting much of his writing life to horror and fantasy fiction, it would have to be said that he remained so by inclination. His mentor was a man named George Sterling, who, when Smith first turned his attention to fantastic stories, applauded his efforts, but said:
.
I don't advise you to devote much time to such things...the mind of man begins to smile at anything that is inherently absurd and outdated. Your faculties are far too fine to be wasted on such vacua...
.
...You have squeezed every drop from the weird (and what drop!) and should touch on it only infrequently, as I on the stars. The swine don't want pearls: they want corn; and it is foolish to hope to change their tastes.
.
Horror fans! We never get an ounce of credit! But, okay, I can't blame him.
.
For the above chunk of background, I borrowed liberally from the story notes written by Scott Connors and Ron Hilger, editors of the new five-volume edition of Clark Ashton Smith's collected stories. These are truly lovely volumes put out by Night Shade Books, and have provided me with my first taste of the fiction of Smith, about whom Gene Wolfe has said:
.
Let us pause briefly to notice that although Lovecraft has had many imitators (he is in fact quite easy to imitate) and [Robert E.] Howard more than a few, no one imitates Smith. There could be only one writer of Clark Ashton Smith stories, and we have had him.
.
So it would seem. Having now read some of Smith's work, even if only the tiniest fraction, it seems very easy to not only trace certain influences, but also more or less coincidental similarities to contemporaries like Lovecraft, Smith's fiction is very much on its own, and the primary reason would be his style. I'll admit right off the bat that I already feel like I'm talking out of my ass, given how little I've read -- the truth is I would have read more, but time was unusually restricted today (I particularly regret not being able to fit in the stories "The Abominations of Yondo" and -- especially, because the title is so striking -- "A Murder in the Fourth Dimension"). Even so, I was immediately struck by Smith's writing, and instantly grateful to Connors, Hilger and Night Shade for refusing to let Smith sink, forgotten, into history, as so many other genre writers, good and bad, already have.
.
All the fiction I read today comes from The End of the Story, volume one of this collection, and the main story I read is, indeed, called "The End of the Story" -- a rather curious and interesting title, it now occurs to me -- which, as a piece of plot-work, is very conventional. The reader is told right away that...
.
The following narrative was found among the papers of Christophe Morand, a young law-student of Tours, after his unaccountable disappearance during a visit at his father's hom 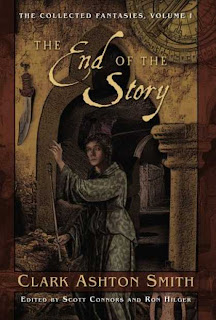 e near Moulins, in November, 1789...
.
Morand's tale concerns his attempted journey home to visit his father. He is waylaid by a storm, and forced to seek shelter at a nearby monastery in the (fictional) region of Averoigne. There he meets a highly gregarious monk named Hilaire, who instantly befriends Morand, offers him food, a bed, and access to the monastery's vast library, which includes "the finest works of heathendom and Christendom, even...certain unique writings that survived the holocaust of Alexandria."
.
Not only that, but Hilaire offers Morand -- a young scholar and lawyer -- the opportunity to read "an unknown dialogue of Plato", "two lost tales of Miletus", and so on. There is also a strange little six-page manuscript that immediately sparks Morand's interest, but about which Hilaire says:
.
"There is a curse on the pages that you hold in you hand...Christophe, there are things beyond your understanding, things that it were not for you to know. The might of Satan is manifestable in devious modes, in diverse manners; there are other temptations than those of the world and the flesh, there are evils no less subtle than irresistible, there are hidden heresies, and necromancies other than those which sorcerers practice."
.
He further implores Morand not to read the manuscript -- comes just short of forbidding him, in fact -- which, of course, makes it far more likely that Morand will read it, which he does.
.
What he reads is a short account of the mysterious fate of Gerard, Comte de Venteillon, who, on the eve of his marriage, disappeared -- a point that puts me in mind of Shirley Jackson's "The Daemon Lover". The gist is, in the forest near his home, Gerard meets a "half-human creature with hoofs and horns". Appalled by the image, as a Christian, Gerard demands that the creature speak for itself...
.
Laughing wildly in the twilight, the bizarre being capered before him, and cried:
.
"I am a satyr, and your Christ is less to me than the weeds that grow in your kitchen-middens...
.
"Stay, Gerard de Venteillon, and I will tell you a secret, knowing which, you will forget the worship of Christ, and forget your beautiful bride of tomorrow, and turn your back on the world and on the very sun itself with no reluctance and no regret."
.
The satyr does tell him the secret, and Gerard does turn his back on everything, making his way not towards his bride but to the mysterious ruins of the Chateau des Faussesflammes (literally "House of False Flames"). These ruins, Morand believes (correctly), might well be the same ruins he's noticed on a hill near the monastery. And, of course, he's drawn to them himself.
.
The evil in this story is as ancient as that found in Arthur Machen's "The Great God Pan", and, of course, it is quite intriguing how Machen's story hangs over so much horror fiction that came after, particularly the fiction I've read this month. Not only are there mysterious satyrs in Smith's forest, but Pan is mentioned in Laird Barron's "The Imago Sequence" ("The panpipes went wild") -- sorry I forgot to mention that one -- Machen himself was referred to in Mark Samuels's "The White Hands", and there is yet more to come. But Smith's belief and reliance on the ancient past for his source of evil seems somehow more genuine -- and don't forget, I really liked all those other stories. Perhaps this is due to Smith's vocabulary. Here, Morand reflects on his desire to visit the ruins near the monastery, despite the warnings that Hilaire has just given him:
.
Before he had finished speaking, a resolve had sprung to life full-born in my mind: I felt that I must go to the Chateau des Faussesflammes and learn for myself, if possible, all that could be learned. The impulse was immediate, overwhelming, ineluctable; and even if I had so desired, I could no more have fought against it than if I had so desired, I could no more have fought against it than if I had been the victim of some sorcerer's invultuation.
.
This language sounds like it was itself drawn from some ancient spellbook. I mean, "invultuation"? But it works. The language drew me back centuries, or more, to the time of the evil which Morand will soon face (though he won't quite see it as evil).
.
In another story I read, "The Epiphany of Death" (another title more intriguing after you've read the story than before), Theolus, the narrator discusses his strange relationship with a man named Tomeron. Tomeron thinks very highly of Theolus, but, while fascinated by him, Theolus's opinion of him is somewhat different:
. 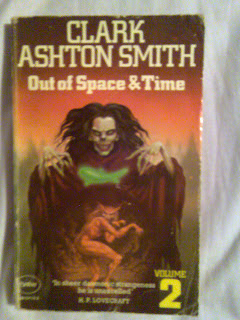 Though he fascinated him at all times, there were occasions when my interest was not unalloyed with an actual sense of repulsion. At whiles, his pallor was too cadaverous, too suggestive of fungi that have grown in the dark, or of leprous bones by moonlight; and the stoop of his shoulders conveyed to my brain the idea that they bore a burden of centuries through which no man could conceivably have lived.
.
Later, the two enter a tomb where...
.
The air was increasingly dank, chill and miasmal; and mephitic shadows crouched or swayed before our torches in every niche and corner.
.
I didn't even know what "mephitic" meant until about five minutes ago, but I instantly knew I loved it. And it's such a crazy word, by the way, that even the definition includes the word "noisome".
.
I won't describe "The Epiphany of Death" beyond that -- it's a very short story that lives off its own language. If you're as taken with the examples I've provided above, then you probably already know that you want to read it. And, actually, the only other story, if it can be referred to as such, that I read today was a half-page piece of work called "To the Daemon" (there's that word, or rather that spelling, again). It's from there that I pulled the quote I used as the title for this post. One interesting detail about "To the Daemon", and its place in The End of the Story is that it's the only story in the book that doesn't get its own story notes from Connors and Hilger. It's almost as though they don't know where it came from -- perhaps it was found, old and dried out, in an old desk that belonged to Smith, the details of its discovery not unlike Morand's uncovering of the manuscript that sends him to the House of False Flames. "To the Daemon" begins:
.
Tell me many tales, O benign maleficent daemon, but tell me none that I have ever heard or have even dreamt of otherwise than obscurely or infrequently.
.
Perhaps it's a manifesto.
Posted by bill r. at 6:46 PM

I'm glad to know Smith's stuff is getting more widely reprinted; I've got some nice vintage paperbacks of his stories that I treasure highly but they're not the kind of thing I'd lend out. Great write-up!

Thanks, Will. And I would never lend out vintage paperbacks like that, either. The books I have like that tend to be ones I found completely by chance, and who knows when they'll come my way again?