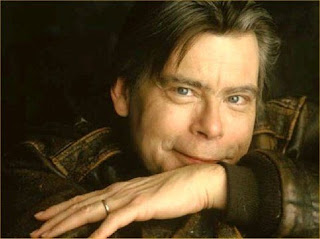 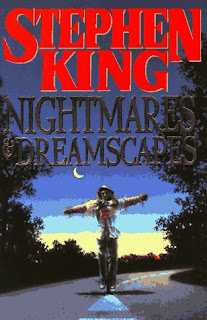 .
I chose two stories, one from his 1993 collection, Nightmares & Dreamscapes, and another from Just After Sunset, which came out last year. This proved to be a fortuitous pairing, because the earlier story, "Home Delivery" is fairly typical of the kind of fiction King is broadly known for, while the later story, "The New York Times at Special Bargain Rates", is more in line with what might be referred to as his more contemplative phase, which is a phase he's been in and out of for a good couple of decades now (it produced Gerald's Game, for instance, which, for the record, I liked), though lately it appears to be a style he's become more comfortable with, and, with Lisey's Story, he's actually getting some recognition for.
.
"Home Delivery" is a zombie story. Pretty much all zombie stories are zombie apocalypse stories, but what makes "Home Delivery" unique is that it focuses on the experiences of a Northern rural lobstermen community located on two small islands off the coast of Maine. Most of you are probably aware that the vast majority of King's work takes place, in whole or in part, in Maine, but what's interesting here as that the two islands -- one called Little Tall, the other called Gennesault Island, or Jenny, for short -- are more or less completely isolated. In other words, they're protected from the apocalypse. They each deal with their own little part of it, but it's actually fairly manageable. Gennesault Island, as a matter of fact, contains only one small graveyard, and since many of the men buried there were lost at sea, not a few of the buried caskets are empty.
.
Told through the eyes of Maddie Pace, pregnant widow of a recently deceased lobsterman named Jack, "Home Delivery" is an unusual and occasionally infuriating story. Growing up in an environment so old-fashioned and insular ("[O]n Jenny and Little Tall," King says, "you had your choice when it came to religion: you could be a Methodist, or if that didn't suit you, you could be a lapsed Methodist") as to be considered backwards, Maddie is a woman who has needed to have a man in her life to keep her not only grounded, but even capable. When her father died (while bowling, mid-roll, in typically too-colorful King fashion), both Maddie and her mother were completely at sea. It wasn't until Maddie met Jack that she was able to exist with some direction again. However, after Jack dies, and after the zombie apocalypse is in full swing, she finds herself able to cope, finally, on her own. Even though the men of the town take it upon themselves, excluding the women, to deal with the zombies, Maddie discovers that she can handle herself just fine. At the same time, she loves the men of the town for their bravery and sacrifice, and overall "Home Delivery" shows King celebrating small-town ways, with the occasional wry knock towards the downside.
.
As usual when King is in this mode, his prose takes on the local color. Sometimes, this is effective, as in this passage describing the rising of the first reanimated corpse in Gennesault Island's small cemetery:
.
Dave told Maddie that he heard a sound like the wind wailing in the chimney on a gusty night, and then the gravestone marking the final resting place of Mr. and Mrs. Fournier's boy Michael, who had died of leukemia at seventeen (bad go, that had been...)
.
Elsewhere, however, King's love of broad stereotypes and colloquialisms practically kill the story. There's a lengthy section of "Home Delivery" describing the zombie apocalypse as it applies to the rest of the world, and here he describes one of the final US news reports, delivered by a young man who had been "pressed into service as a CNN reporter":
.
"I want to repeat this," the accidental reporter had said..."I want to repeat that a bunch of corpses have just lunched up on the President and his wife and whole lot of other political hotshots who were in the White House to eat poached salmon and cherries jubilee."
.
I would say that this is in keeping with the only half-serious tone of the story, if King hadn't been doing this sort of thing for the entirety of his career. And in fact, King's mocking (some would say "satirical") approach to the world outside of Little Tall and Jenny has the residual effect of making his beloved rural lobstermen, including Maddie, look cold-hearted. Their islands are more or less safe, so damn the rest of humanity. Still, this is generally a sharp, well-paced and engaging story, with a truly new spin on a horror subgenre that, as I read it in 2009, would otherwise seem to be entirely played out. Judging from King, though, maybe not.
. 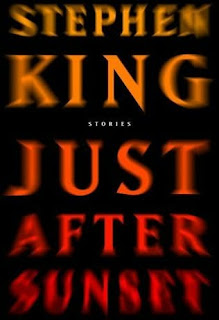 .
The next story, "The New York Times at Special Bargain Rates" (a title which will make no sense to anyone only reading this summary, but which completely works in context) is quite a bit different. Collected in Just After Sunset, it also appears in the 2009 edition of Stephen Jones's anthology series Best New Horror, and in his introduction to the story, Jones says:
.
After twenty years I am delighted to finally welcome the world's most successful, popular and influential horror writer to these pages.
.
You gotta love that "finally". Does Jones think that, in his tenure as editor of Best New Horror that King has been churning out two decades worth of dreck? For one thing, in the short fiction form, King has, as I've said, done some very good work, and some of it is much better than the story that finally forced Jones to cave and include him. All of this is a bit of a digression, except that I truly am a bit perplexed over why this is the story that broke the dam. It's a pretty good story, but it's not actually horror, but more of a melancholy, spiritual fantasy, dealing, once again, with a widow, named Anne, learning to deal with the loss of her husband.
.
In this case, she doesn't have to do it in the context of a zombie apocalypse, but rather as any other human being would: through simple grieving. Except, of course, while breaking away from the funeral planning to take a shower, Anne gets a phone call, and it's from her deceased husband, James. James died in a plane crash, and he seems to be calling from Heaven's waiting room ("'Well, I tell you what', he says. 'I don't know exactly where I am.'"). James doesn't seem too terribly upset about his own death -- a feature of the afterlife that I hope would be common -- and he speaks to Anne in a calming, off-hand fashion that has the effect of making her, at the same time, relatively at ease, and somewhat manic. But when and if the reader is able to buy into the reality of the conversation, King is able to achieve a kind of simple poignancy through little details that, at his best, has always been one of his main strengths:
.
"Jimmy, did you know?" This idea has been the hardest and most terrible part for her -- that he might have known, if only for an endless minute or two. Others might picture burned bodies or dismembered heads with grinning teeth; even light-fingered first responders filching wedding rings and diamond ear-clips, but what has robbed Annie Driscoll's sleep is the image of Jimmy looking out his window as the streets and cars and the brown apartment buildings of Brooklyn swell closer. The useless masks flopping down like the corpses of small yellow animals. The overhead bins popping open, carry-ons starting to fly, someone's Norelco razor rolling up the tilted aisle.
.
"Did you know you were going down?"
.
"Not really," he says. "Everything seemed all right until the very end -- maybe the last thirty seconds. Although it's hard to keep track in situations like that, I always think."
.
Situations like that. And even more telling: I always think. As if he has been aboard half a dozen crashing 767s instead of just the one.
.
I love this passage -- particularly that "instead of just the one" -- because King somehow manages to recognize the common quirks of human speech in a conversation that no one on the planet has ever had before. At his most reined in, King has this kind of gift. Unfortunately, in this story, he also adds a subplot about James enigmatically warning Anne of future disasters that she needs to avoid. These disasters aren't of the global, mass-death variety, but more intimate tragedies -- even so, it's a completely unnecessary element that seems to be there just to convince Anne that she really had the conversation. But since I was already convinced of it, for the purposes of the story, James's prognostications were a tired distraction from an otherwise simple and moving story.
.
Oh well, I guess. It only proves something I already knew, which is that Stephen King is a legitimately talented writer who sometimes -- often, even -- can't get out of his own way. But he's also, at his very core, a born storyteller, and for that reason alone I can never really dismiss him. Well, obviously, since I keep buying his books, with every intention of reading them. It's just that lately, I don't. Except for the short stories. Which is interesting.
Posted by bill r. at 8:03 PM

King was my favorite author in middle school- of course I got over him, but I do think that if any book of his deserves to be called a masterpiece, it's Salem's Lot. Actually, the first book of his I ever read was Dreamcatcher, which I read in all its 800 page entirety despite not even knowing what was going on after I made it past the first 400 pages. Ever see Lawrence Kasdan's movie adaptation? I liked it, but William Goldman's screenplay goes all over the place; you can tell that even the filmmakers couldn't make sense of the book.

I'm less familiar with King's short story novels. The only part of Graveyard Shitf I ever read was, well... "Graveyard Shift". I've never even picked up The Stand or Nightmares and Dreamscapes.

Did you know Tobe Hooper is going to film From A Buick 8? I haven't even read it, but I'm thrilled just by the thought of King reuniting with Hooper again.

DESPARATION was sheer torture to read; THE REGULATORS moves a lot more quickly (retooled from a screenplay that King did for Sam Peckinpah before Peckinpah died), but isn't quite the best of Bachman.

FROM A BUICK 8 is interesting - not a whole lot of action, but it seems to be an exercise in creating suspense based on what one THINKS will happen -- and not a bad one. It does help a bit to know some of the DARK TOWER connections, though.