This is going to be a tough one. Look, every day of this project is a crapshoot, because I don't know if I'm going to like the story or stories that I read, and therefore don't know what my attitude will be when I sit down to write about them. And I don't especially mind if I hate the story, because that will certainly give me something to write about, at the very least. What kills me is when I'm indifferent to the story. In those cases, I hardly think I can get by with saying "This one was okay, you might like it, but I don't know." This problem is sometimes compounded by the fact that I don't know anything about the person who wrote it, though today that isn't an issue. What's really bugging me today is that the guy who wrote the story to which I'll be directing my apathy is Richard Matheson, and in choosing to write about him today, I really, really wanted to put him in a good light.
.
I don't think this can reasonably be considered a "first thing's first" kind of statement, but I do want to start off by saying that Matheson's fiction has severely dropped off in quality over the last decade or two. More, possibly, because he actually doesn't publish much these days. But outside of a couple of really good Westerns he wrote in the 1990s (Journal of the Gun Years 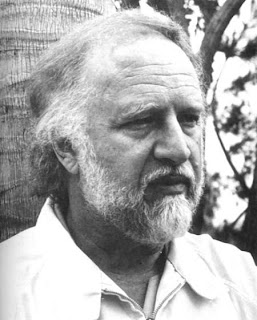 and The Gunfight) his later fiction has been sort of awful, with the nadir coming in 2002, in the form of a novel called Hunted Past Reason. This is a novel that combines Matheson's non-mainstream spiritual beliefs with an alarmingly graphic Deliverance-style suspense story. Though I don't share them, I'm not going to spend any time mocking Matheson's beliefs, but I must say that preaching about reincarnation doesn't mix well with male rape. Few things do, I suppose.
.
I read Hunted Past Reason at a time when I was well past my early exposure to Matheson's work, and was coming to find much to dislike about his new stuff. But I loved that old stuff. Great short stories like "The Distributor" and "Born of Man and Woman", and truly classic novels like I Am Legend, plus his work as a screenwriter on Burn, Witch, Burn!, the films based on his work like The Incredible Shrinking Man and Duel...the guy's got a hell of a resume, and his reputation as one of the great genre writers of the 50s, 60s and 70s is entirely justified. As he got older, he just lost his feel for it. Big deal, it happens; it happened to Robert Bloch, also, and I'm not the kind of guy who believes that bad work late in a career tarnishes the good work done before. Still, books like Hunted Past Reason made me wonder if I'd grown out of Matheson, and that maybe if I went back to his old work I'd find that he was never that good, and that it was all hype. So I reread I Am Legend, and doing so completely shot the shit out of that theory. It's still a great book.
.
All of which, finally, made me confident about today's reading, because I was gonna read something old. Because Matheson has written in so many genres, I figured the best book to use was a collection of old Matheson stories, put out by TOR several years ago, called Duel, and I picked a fairly long one called "Trespass". It's about a guy named David Collier who, as the story opens, has just returned home from South America after six months to find Ann, his wife, strangely withdrawn. He's been dreaming of this homecoming for a long time, and is shaken by its anticlimactic nature. Why is Ann so upset? Because she's pregnant. And she conceived within the last six months. David is understandably outraged, but Ann assures him that she did not cheat on him, and does not know how this could have happened. A skeptical David reminds her that he's a scientist, and that conception is impossible without intercourse (or at least sperm, but Ann's argument implies that this was also nowhere to be found).
.
As the months pass by, David frantically tries to find an answer that will prove his wife correct -- he consults Kleinman, their doctor, and David's fellow scientist and friend John Meader -- but comes up empty. At the same time, Ann -- who is increasingly angry at David for refusing to believe her, let's face it, pretty messed up story -- begins behaving erratically. She eats incredible amounts of salt. She drinks gallons of water and coffee. She goes outside, into the cold Indiana winter, wearing very little and catches pneumonia. She begins reading every book on every subject she can get her hands on -- on physics, geography, history, chemistry, etc. -- books she never showed any interest in before. She begins chanting a strange singsong with 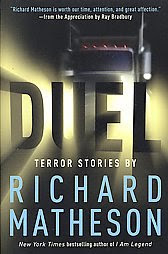 lyrics such as "To walk on shores of orange sea, cool, to tread the crimson fields, cool, to raft on silent waters, cool..."
.
And there's more. Her pneumonia is cured in seventeen minutes. X-rays show the fetus continues to change its size, apparently at will. It also has two hearts. So basically, it's a martian. Yeah, that's where this story's going, and you probably knew that, as I did, and you probably also, as I do, find nothing inherently wrong with that premise. In fact, the story threatens to have a surprisingly nasty ending, though it ultimately goes soft (while maintaining a kind of subjective bleakness in the heroes triumph). The problem is the story's overall flatness and repetition. Ann eats salt and drinks a lot of coffee and water, and she keeps doing that for pages. Page after page after page of that. Possibly this is Matheson's attempt to build up the strangeness of his situation so that the final revelation of what's going on, and the various characters' essentially rapid acceptance of the idea, will go down easier, but it doesn't quite work.
.
The title of this post is the exact line of dialogue as delivered by John Meader when he tells David and Kleinman what he believes Ann's real problem is. He says: "Ann has a Martian in her womb!" I wonder how that line would have played for me had he said "alien" instead of "Martian" -- I still may have not been a fan of it, but I think I at least would have given it a pass. As it stands, all I could think was, "Why 'Martian'? How the hell do you know it's specifically from Mars? General 'alien', okay, but there's nothing about Ann's symptoms that scream 'Mars'." Of course, in the 1950s, when the story was written, "Martian" and "alien" were basically synonymous in popular culture, but the line still reads as plain goofy.
.
I don't know. I don't know what else to say about this story, really. Despite my misgivings, it is fine. But this is Matheson, and I wanted to read something great by him, or at least very good, something I could point to and say, "See? When people say Matheson is great, this is what they're talking about." And he is great, or was, but my choice of story unfortunately does not bear that out.
.
Read I Am Legend instead.
Posted by bill r. at 4:18 PM

Labels: Horror, Hunted Past Reason, I Am Legend, Richard Matheson, The Kind of Face You Slash

I loved I Am Legend years ago; needs a reread. Wasn't taken with Bid Time Return, the basis for the guilty pleasure movie Somewhere in Time. Stir of Echoes sits on my shelf, awaiting a read.

But don't see I am Legend! I did and I was not pleased. At all.

"Trespass" was also TV-Movie-of-the-Week fodder during the 70's... titled "The Stranger Within", it had Barbara Eden as the surrogate mom.

Will - I actually haven't read either of those either. I realized while writing this that I'd read less Matheson than I thought.

Greg - Yes, everybody, Greg's right. Don't see that movie. It's a bad movie.

L. Rob - Always coming through with the information...thanks a lot, I had no idea about that. Was it any good? It's not a bad story, really.

Nothing guilty about the great Somewhere in Time.

You're right. See Omega Man instead.

"... I must say that preaching about reincarnation doesn't mix well with male rape. Few things do, I suppose."

Great line. And so evocative of what I like about your site. :)

By the way, that Barbara Eden movie just became available by way of the Warner Archive collection this month.

Thanks, Tony! And man, ask and you shall received, apparently. Thanks for the tip!