Apathy breeds apathy. That's a phrase I just made up, and, I freely admit, it sounds pretty stupid. But reading fiction that I've obligated myself to write about, and finding that fiction to be uninspiring makes it twice as difficult to actually sit down and physically perform the act of writing than it might otherwise have been. And to be honest, it would have been difficult enough anyway.

But maybe it's just me. Laird Barron, today's subject, is quite the up-and-coming writer. So up-and-coming, in fact, that his first book, The Imago Sequence, is actually readily available for acceptable retail prices. When you consider the fact that the book is a collection of stories -- never big sellers in any genre -- then you begin to realize that something is up (and, presumably, coming). Novels sell, story collections don't, unless, maybe, if they're multi-author anthologies. But the first book by a genre writer whose work is not distinguished by extreme violence (not from what I've read, anyway)? Who is this Laird Barron character, anyway? The reviews have been very positive (though on the "Reviews" section of his website features an unusually high number of blurbs by one critic -- Nick Gevers of LOCUS magazine -- all of which, as far as I know, could have come from the same review), he's won awards that aren't the Bram Stoker Award (The Imago Sequence scooped up the Shirley Jackson Award for Best Collection), and has developed a healthy cult following.
.
(Also, as an aside, on his blog, Barron jumps to the defense of John Langan's Mr. Gaunt and Other Uneasy Encounters, two stories from which I talked about in mixed-to-negative terms yesterday. Apparently, the Langan book has not been embraced by everyone, and Barron wants to "call fools on their foolishness". Having only read two of Langan's stories, all I can honestly say is that I kind of disagree with him, but I also have to admit that I admire Barron for taking the time out to praise another writer's work like that. Maybe the two of them are friends, I don't know, but regardless, it's nice to see that kind of solidarity. And I'm being sincere.)
. 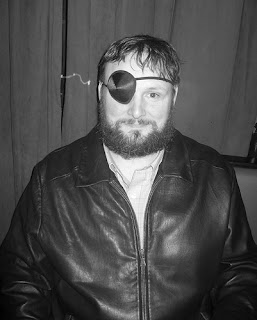 So...why did Barron's work leave me so cold? The main story I read is the collection's signature piece, "The Imago Sequence", and the structure of the story immediately perked me up: it's a genre hybrid, you see, combining horror and hard-boiled detective fiction. Another plus, for me, is that it plays this merger straight. Too often, genre hybrids go out of their way to wink at the audience (see another crime/horror hybrid, the made-for-cable movie Cast a Deadly Spell, which I actually did like, but that's beside the point, sort of), and I like my genre writers to take what they do seriously. Which is not to say I want them to be humorless -- Barron knows to keep in the smart-ass patter that is a staple of detective fiction -- but rather that I don't want them thinking genre fiction is all one big silly game. Okay, so Barron doesn't do that. Point to Barron.
.
Barron's detective, Marvin Cortez, isn't of the "knight errant" variety favored by Raymond Chandler and John D. MacDonald. Instead, Cortez is a low-level thug and criminal who does a variety of jobs for his shady friends, said jobs occasionally calling for investigative work. In this case, he's been asked by his buddy Jacob Wilson to track down the second two photographs out of a series of three called, collectively, "The Imago Sequence", each taken by an otherwise undistinguished photographer named Maurice Ammon. The first photograph, called "Parallax Alpha", is already in Wilson's possession, and is described thusly:
.
Shot on black and white, it detailed a slab of rock, which I assumed was subterranean...I was fascinated by the surreal quality of this glazed wall, its calcified ridges, webbed spirals and bubbles. The inkblot at its heart was humanoid, head twisted to regard the viewer. The ambient light had created a blur not unlike a halo, or horns, depending on the angle. This apish thing possessed a broad mouth slackened as an unequal ellipse. A horrible silhouette; lumpy, misshapen and dead for epochs. Hopefully dead. Other pockets of half-realized darkness orbited the formation; fragments splintered from the core. More cavemen, devils, or dragons.
.
The second photograph, called "Parallax Beta" is actually on exhibit in San Francisco, and the third picture, called simply "Imago" is presumably in the possession of a former assistant of Ammon's named Anselm Thornton. Wilson wants Cortez to track down Thornton, and "Imago".
.
From there, the plot is tangled enough to allow Cortez to actually need to go about the process of investigating, and the situations he finds himself in are standard for the detective genre. For instance, he interrogates a deviant socialite, currently housed in a mental instituion/country club, who used to know Thornton intimately. The information he receives from her indicates that Thornton is either mixed up in a religious cult, or Left-wing domestic terrorism, or both. As I say, all standard (although, pick your wing on the domestic terrorism angle, because both get regular representation in detective fiction), but also no less compelling for that.
. 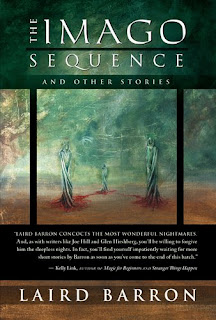 The kind of twists Barron throws at us to remind us that this also a horror story are cleverly done. In detective fiction, there will usually be one lead, one person that the detective needs to track down who, when he's found, will have a nickle-sized bullet hole in the middle of his forehead. In "The Imago Sequence", however, it's not so simple. This lead's name is Renfro -- and I'll be honest and say that his direct connection to the story escapes me at the moment -- and when Cortez enters his home, expecting, based on certain signifiers, to find Renfro's corpse, he instead finds that Renfro's living room floor has been torn up, and massive hole dug in the earth, and at the bottom...
.
There was a lot of debris at the bottom of that hole. A lot of debris and the light was dimming as its batteries gave up the ghost and I couldn't be one hundred percent sure, but I glimpsed an earthen lump down there, right where the darkness thickened. A man-sized lump. At its head was a damp depression which a small object glinted. When I hit it with the light, it flickered. Blinked, blinked.
.
It's that blinking, of course, that produces the chill of horror. If that lump is, indeed, Renfro, we expected him to be dead. We did not expect him to not be dead, and only the horror genre can make that the more dreadful of the two options.
.
Eventually, Cortez -- who has been suffering bizarre, insect-laden nightmares since he first laid eyes on "Parallax Alpha", and has also been experiencing and dark, otherworldly pull towards some unknown destination that has very little to do with what Wilson is paying him for -- gets an eyeful of "Parallax Beta", and he even finds himself face to face with "Imago".
.
And so now how about this: in writing this post, I'm realizing that I liked this story far more than I originally thought I did, or that it at least had a greater impact on me that I'd realized. It's curious, but I began writing this in an apathetic slump, but the jolt of the story's finale is coming back to me, snapping at my brain. I'm now telling myself "You read this story on your terms, and you should have read it on its own terms." A bad move on my part, but I've ended up with an interesting dovetail with yesterday's post, in which I found myself reacting to John Langan's fiction more negatively than I'd thought I would be before I began writing, and today all I want to do is tell you what happens at the end, and ask anyone who's also read the story to jump in and talk about it with me. Because one detail of the story -- that there are three photographs in the Imago Sequence-- turns out to not be a point that is part arbitrary, part convenient plot structure, but rather both, and perhaps symbolically central to the story's ultimate impact. Suffice it to say, Cortez does, in a sense, find "Imago", and we're reminded that there are three photographs. And then you turn back to the first page of this 40-page story, and re-read the epigraph Barron chose to kick things off, a mysterious quote from the poet Wallace Stevens: