The Kind of Face You SLASH!!! - Day 26: The Horror Behind the Bright Billboard

I read Fritz Leiber's Conjure Wife well over a decade ago, and I still remember that novel's central horrific moment very clearly. My subsequent reading of Leiber's work -- he was very prolific in horror, science fiction, and fantasy -- can't even be called "spotty", but I do think that the way that moment in Conjure Wife lingers in my mind -- even stronger than Burn, Witch, Burn the very good film adaptation of the novel I saw some time after -- says something about Leiber's ability to describe moments of pure dread in a way that is, if not technically similar, at least in impact akin to Shirley Jackson. In The Haunting of Hill House, Jackson describes a moment where the characters discover mysterious writing on a wall of the house. This idea had been seemingly beaten to death by the time Jackson got around to it, but there's something about the way she describes it, and what the writing says, and the context of it all, that made the hair on my arms literally stand up. Leiber's big moment in Conjure Wife was similarly old hat when he was writing his book, but he knew how to make it play, and how to make the reader care about what had just happened. This, I believe, is a very hard trick to pull off.

So I should have been reading a lot of Leiber's work in the years that followed, but I didn't. I apparently read a story by him called "Belsen Express", but I can't remember a thing about it. The only work of Leiber 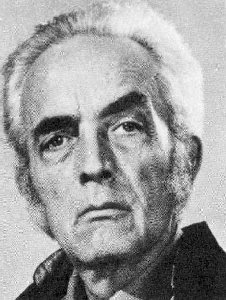 's I really knew, outside of Conjure Wife, and before today's reading, was his little-more-than-a-cameo turn as Dr. Waterman in the goofy, yet legitimately compelling, 1970 monster movie Equinox, which means that my decision to take Leiber as my subject was one I made happily, and with no little anticipation. That's always nice.
I chose two of Leiber's best known and most reprinted stories, "Smoke Ghost" and "The Girl with the Hungry Eyes" -- I took both from his 1948 collection Night's Black Agents, but they're not hard to find in horror anthologies ("Smoke Ghost", for instance, can be found in The Dark Descent and "The Girl with the Hungry Eyes" recently appeared in S. T. Joshi's American Supernatural Tales). There are a number of possible reasons to explain the longevity of each story (both are good, for one thing), but the primary reason is that, though both stories were written in the 1940s, thematically they travel very well. The issues, or, more properly, the states of mind, that each story touches on are timeless, or close enough, to 20th and 21st century eyes.
"Smoke Ghost" is about a man with the unlikely name of Catesby Wran. Wran works in advertising, and appeared to his friends and family, before the story opens, as a reasonably normal guy. But one morning he comes to work and says the following to his secretary, Miss Millick:

"Have you ever thought what a ghost of our times would look like, Miss Millick? Just picture it. A smoky composite face with the hungry anxiety of the unemployed, the neurotic restlessness of the person without purpose, the jerky tension of the high-pressure metropolitan worker, the uneasy resentment of the striker, the callous opportunism of the scab, the aggressive whine of the panhandler, the inhibited terror of the bombed civilian, and a thousand other twisted emotional patterns. Each one overlying and yet blending with the other, like a pile of semi-transparent masks?"
Wran has a very good reason for thinking along these lines -- every night, while riding the elevated train on the way home from work, he's been seeing something very strange on a particular set of bleak, sooty rooftops as he passed by. Although he suspects the problem is with himself, with his mind, he will have greater reason in the days to come to believe that what he's been seeing on his way home from work every day that has led him to these uneasy connections are not hallucinations, but rather based in a very real, if supernatural, reality. And here's what he's been seeing:

One evening toward winter he noticed what seemed to be a shapeless black sack lying on the third roof from the tracks. He did not think about it. It merely registered as an addition to the well-known scene and his memory stored away the impression for further reference. Next evening, however, he decided he had been mistaken in one detail. The object was a roof nearer than he had thought. Its color and texture, and the grimy stains around it, suggested that it was filled with coal dust...
.
A few days later, after not seeing the sack:
.
As he walked home from the elevated...he found himself wondering whether the sack was really gone. He seemed to recall a vague, smudgy trail leading across the gravel to the nearer side of the roof, which was masked by a parapet. For an instant an unpleasant picture formed in his mind -- that of an inky, humped creature crouched behind the parapet, waiting.
.
"Smoke Ghost" was first published in 1941, which means, more than likely, America hadn't yet entered World War II when Leiber wrote it, but war was on the country's mind anyway, since it was already the preoccupation of the rest of the world. And war -- along with poverty and urban decay -- is continuously mentioned throughout "Smoke Ghost". Characters mention their fear of it, and Wran obsesses about living in a century in which the planet seems to be perpetually in conflict with itself. The ghost, the horror, of this story, therefore, is not the produce of any one person having passed away and who now seeks closure, or vengeance. The ghost is created by the way we lived then, and now, and pretty much every year in between. There is, I must say, a certain arrogance in believing that the era in which you live is the most trying and violent era the world has yet seen, especially when recorded history would vehemently argue against such a belief, but "Ah, it could be worse" isn't a philosophy that is conducive to horror fiction. And let's not forget that global war brought about by the greatest human evil in living memory is going to make anybody twitchy.
.
Up to a point, "Smoke Ghost" and it sense of urban dread involving strange, fabricky nightmares brought to mind T. E. D. Klein's great "Children of the Kingdom", which, of course, was written thirty years later. This similarity, which is quite vague, doesn't cut into the effectiveness of either story, but Leiber's attempt to turn the horror up a few notches at the end of "Smoke Ghost" didn't quite work for me. For one thing, he puts a human face (in a sense) on the horror, and second he does so in a way that recalls a particular genre trope that has been absolutely played out. It's curious that the familiar trope I referred to, obliquely, from Conjure Wife works quite well, but I thought "Smoke Ghost" trailed off a little for doing something similar. Even more curious is that the trope in question was made familiar by a novel, and several film adaptations of same, that was published fourteen years after Leiber's story. The problem is, simply, that the ghost in "Smoke Ghost" is initially incomprehensible. At the end, it appears as something recognizable. To me, that's a step down. Ultimately, that's a small matter, however, and "Smoke Ghost" lives on and remains strong due to its early, quiet uneasiness.
.
The second story, "The Girl with the Hungry Eyes" is less successful, while being more consistent. Told in conversational first person by a second-rate commercial photographer named Dave, it relates Dave's discovery of -- or, rather, discovery by -- a young model who one 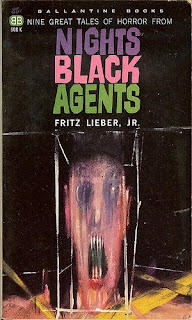 day enters his studio and asks to be given a shot. Dave, not seeing much in her, grudgingly agrees to take a series of pictures of her, which he later includes in the portfolio he shops around to various clients and businesses looking for a new female model around which to base ad campaigns. To his surprise, he gets several bites right away, and although he has a bear of a time tracking the model down again (she didn't leave her phone number with him, or even her name), once he does his business begins to take off.
.
The appeal of this girl is in her eyes. Leiber writes:

That's the real reason she's plastered all over the country today, you know -- those eyes. Nothing vulgar, but just the same they're looking at you with a hunger that's all sex and something more than sex. That's what everybody's been looking for since the Year One -- something a little more than sex.
.
Dave's story is told after the girl (or, the Girl, as she's called throughout) has become a world-famous icon of beauty (and advertising). But Dave has broken away from her, because, he tells us, he is frightened. He's frightened by the Girl's strange behavior, he's frightened by his nearly uncontrollable desire for her, his frightened by her eyes, her hunger, as well as, we learn, the killings.
Like "Smoke Ghost", some version of "The Girl with the Hungry Eyes" could be written at any time, at leasing during the last hundred years or so. It is vaguely a vampire story ("There are vampires," Dave says, "and vampires"), with all the connection to sex and obsession that normally follow. But it's also about becoming obsessed with an ideal that has been presented to us by mass culture, but which doesn't actually exist in reality, or at least doesn't exist in the way we hope it does. It's about the dangers of such obsession, as well as the base stupidity of it.
.
Fritz Leiber stories, in my so far limited experience, don't date. Sixty years ago, he was looking around, feeling uneasy about the times in which he lived. If he were still alive, still looking around, he'd feel the exact amount of despair, and for the same reasons. That's vision.
Posted by bill r. at 3:48 PM

It's the only thing by Leiber I've read, but "Conjure Wife" is one of the best spook stories I've ever encountered. The way it balances the perversity of the plot against the humdrum university background is model for the genre.

Yeah, it's a really good book. What's kept me from reading more Leiber until now, I don't know (well, I did take a brief stab at his SF/fantasy novel GATHER, DARKNESS!, but, at the time at least, I couldn't get along with it). Leiber's other big horror novel, OUR LADY OF DARKNESS, is supposed to be even better.

It's been about 15 years since I read either CONJURE WIFE or OUR LADY OF DARKNESS, but it was LADY that really stuck with me--give it a shot! I keep meaning to reread it to see if it holds up, but I remember its big "scare scene" well. Also I liked that both novels had professors/academics as their protagonists, since I was in college at the time.

Will, I plan on reading OUR LADY...pretty soon, but I have to read some Clark Ashton Smith first.