The first novel I read by Bentley Little was called The Revelation. Had I been given the book in manuscript form, free from the knowledge that it had been published, and told that it was written by a teenage boy with a thing for gore films, I would have thought, "Yeah, that sounds about right." And, being naturally generous of spirit, I would have also given the plucky teen credit for seeing his book through to the end.
But The Revelation was not written by a teenager. It was published in 1990, when Little was thirty years old, and it won the Bram Stoker Award for Best First Novel. Maybe now you can understand my occasional frustration with this genre. You might also conclude that I have no one to blame but myself when I tell you that I continued to read Little after that experience. I think the next thing I read was a short story called "The Washingtonians", which centers around the revelation that George Washington was a child murderer and cannibal. That's sacrilege, I agree, but it's so bonkers a premise that had Little pulled it off, I would have had no choice but to tip my cap to him. Unfortunately, Little chose the least interesting approach to the material, by telling his story from the point of view of a contemporary man making the historic discovery, and then being set upon by rabid Washington cults, bent on keeping the truth hidden. Yawn. Tell that story from the point of view of George Washington himself, and maybe then you'd have something. Instead, Little cut his own idea off at the knees. 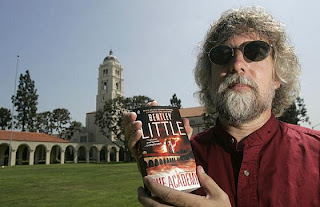 Then I went and I read another Little novel, this one called Dispatch. It's a horror novel based around letter writing (his second, it would seem, involving the postal service, as he wrote another novel called The Mailman, which I haven't read), and it, too, is pretty nuts. I also thought that one was largely successful, until an utterly ridiculous and bone-headed ending. But hey, I'd never read that novel before, at least. Credit where it's due, and everything. Little, it would seem, will write about whatever crazy thing enters his head, and I think this, more than anything else, accounts for his wide popularity in the horror community. You may not have heard of him yourself, but in certain quarters he's considered one of the big guns. Stephen King, for example, is extremely high on him, but that might just be because Little sometimes has his characters say things like "Eat my dick with brussels sprouts!", which is very much like something the Stephen King I don't like would write.
Most of Little's output has been novels -- and he's very prolific, with nineteen novels in as many years -- but he does have one collection of short fiction called, simply, The Collection (a title that is in keeping with most of his novel titles, like The Store, The Academy, The Policy, and so forth), and it is from whence I drew for today's readings. Ahem.
The first story is called "The Man in the Passenger Seat", and it's about a guy named Brian who, on his way to work one morning, pulls up to an ATM in order to make a quick deposit to cover some outstanding checks, but before he has a chance to do that, he sees a very fat man approach his car, open the door, and climb into the passenger seat. Brian tells him to get out, but the man only berates him with the aforementioned brussels sprouts zinger and tells him to drive. Even though the man appears to have no weapon, Brian does what he's told.
"The Man in the Passenger Seat" tries to be a kind of Patty Hearst/ambiguously anti-corporate America satire, but it doesn't have any kind of narrative drive, or electricity to the prose, to achieve much of anything. Brian waffles between being terrified of the man, and wanting to escape, to wondering what, really, there is for him to escape to. Here's some of that ambiguity in action:
The would have to stop for gas soon -- at the next town, if they weren't pulled over first -- and he knew that he would be able to escape at that time. He would be able to either run away or kick the shit out of the obese bastard.

But though he wanted desperately to kick the crap out of the crazy fucker, he wasn't sure he really wanted to escape.

I wonder if Little considered, and then rejected, variations like "He really wanted to kick the poop out of the fat crazy person" and "He sure wanted to kick the stool out of that portly loony toon" before picking the two versions you see above. Also, Brian wants to escape...or does he??

No, he, he doesn't. In the end, although the tubby person with a severe mental disorder does some pretty creepy things in the course of their time together, Brian decides that he's never felt more alive, however wrong or dangerous his newly chosen path might be. Because, you see, he believes that his co-workers have probably not even noticed that he's gone missing:

They'd be temporarily inconvenienced by his absence, would curse him for not being there to perform his regular duties, but they would not miss him.

They would not care enough to call and see if he was all right.

Yeah, because apparently you're a sociopathic loner! They're probably relieved you didn't show up with a gun! 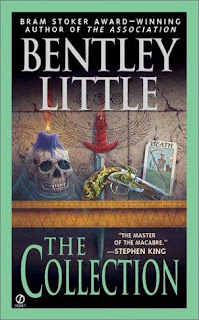 The next story is called "The Show", and it's about a teenager whose parents are always fighting and drinking, and he just can't take it anymore, so when his friend invites him to come with him to this weird club where you can pay to witness a live murder, he says okay. Later on, though, he feels bad about it, and then something else bad happens.

That's your story, folks, and I wish I was kidding. Now, I'll admit, viewed as an outline, something good could easily come from that idea, but Little is content to simply go through the motions. I'm not quite sure what his first mistake is, but I think it might be the revelation that both our narrator and his friend witnessed a grotesque traffic accident when they were young, and each has been drawn towards violence ever since. As psychological insight, this is so rinky-dink that the story would have been better off without it -- at least then there would have been a hint of mystery. Little's biggest mistake, however, can be found in his attempts to depict the narrator's feelings about having paid to witness a murder. Here's what we get:

I felt filthy, unclean, covered with blood although none of the flying blood had touched me.

I could not imagine anyone wanting to sit through that butchery more than once.

I wondered how he slept at night. I wondered if he had nightmares.

Outside of a brief description of a nightmare the narrator has, that's literally it. That's the kind of creative power Bentley Little is willing to bring to the table here. It's as though he simply wrote down what he wanted to describe, rather than actually describing it. And that's his prose style, as best I've been able to tell.

Each story in The Collection is preceded by a brief introductory note from Little. Neither of the notes for the stories discussed here are worth mentioning, but there's another story in the book called "Blood", and here's what Little has to say about it:

Before I moved in with my wife, I lived on macaroni and cheese. I spent so much time standing in front of my stove, stirring pots of boiling macaroni, that I used to stare down into the swirling, roiling water and imagine that I could see shapes in the foam the way some people see shapes in clouds.

I decided to write a story about it.

How could you possibly resist the urge to keep reading after that? I didn't read the story he's selling so aggressively here -- and clearly I should have -- but I think that little introduction highlights a couple of things that somebody (an editor, maybe?) should try to impress upon Bentley Little. One is that not everything is a story idea, and the other, more importantly, is that a story idea does not count as a story. And stretching out a description of that idea to ten pages is not writing. You'd think someone would have thought to mention this to him at some point over the last nineteen years, but I guess not.

I'm finding it really hard to believe that macaroni-boiling-as-literary-inspiration anecdote isn't an obvious parody of the most inept extremes of horror writing.

But then I think I read something by this guy called "The Store" and... now it suddenly seems all too believable.

And no less than Stephen King, it seems, considers him A MASTER OF THE MACABRE, to go by the blurb on that cover there.

King loves the guy. But King loves Jack Ketchum, too, so what're you gonna do?

Great stuff, love reading how awful this guy is. I always "knew" Little was terrible, but now I know he's terrible.

Have you ever read his stuff, Will? Everybody seems to love this guy, and I don't get it.

I have not; the simplistic titles alone put me off. Little was on the rise when I was losing interest in contemporary horror. He seemed less like a Clive Barker or Thomas Ligotti than another John Saul or RL Stine. Your comments about him jibed with what I *imagined* his stuff would be like: trite, simplistic, sophomoric, and the samples of his prose you provided confirm my gut instinct.