I don't know anything about John Langan. He doesn't have a website, not that I could find anyway, that would tell me more about who he is and where he comes from, and Elizabeth Hand's introduction to his collection of stories, Mr. Gaunt and Other Uneasy Encounters, focuses on the difference between the two kinds of traditional horror stories, which, she informs me, critic Jack Sullivan has labeled "the antiquarian and the visionary", before going on to explain that this is the kind of story John Langan writes.
And so it would appear, based on the two stories I sampled from the collection. I believe I first heard of Mr. Gaunt, which was published in 2007, while persuing a list of recent winners and nominees of the Bram Stoker Award, which is to the horror genre what the Hugo is to science fiction. Langan's collection was nominated, though it didn't win, for best story collection, and, despite my at-best sketchy experience with the fiction that is deemed Stoker-worthy, I was immediately struck by the title. Mr. Gaunt and Other Uneasy Encounters immediately invokes, for me, good, traditional, spooky horror fiction, the kind of fiction that every contemporary horror fan and writer claims to love, but which very few people seem to want to write anymore. Langan, apparently, does want to write it. This is encouraging, not least because the pictures of Langan I've found on-line reveal him to be a young guy, or young-ish. The title of his collection, combined with the book's cover design, had led me to jump to the baseless conclusion that Langan was at least in his early middle-age, and had either been writing for decades under my radar, or was maybe simply not prolific (Mr. Gaunt is his first book), or maybe he even came to writing later in his life than is the norm. But I was wrong -- he's young guy who wants to write the good old stuff. Good for him, possibly good for us, although, unfortunately, his youth (or youthful outlook; I can't find out how old this guy is) does occasionally show in his writing. 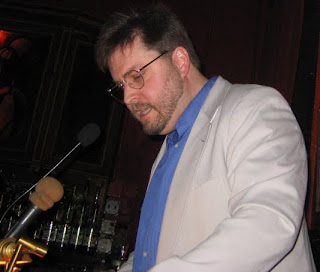 The first story I read was "Mr. Gaunt", which tells the story of Henry Farange, his recently deceased father (who was, not incidentally, a scholar of Henry James), and his Uncle George. While going through his father's belongings, some time after the funeral, Henry finds a cassette tape on which his father has recorded a story for Henry -- the true story, he insists, on which he'd based the childhood fairytale of Mr. Gaunt. This fairy tale was used as a kind of deterrent, a variation on the old "Don't do that or the Boogeyman will get you!" stories with which we're all familiar. In the story, an unnamed boy does something his father told him not to do, and as a result the evil and mysterious Mr. Gaunt rains vengeance down upon the poor soul. But Mr. Gaunt, Henry's father now tells him, was real, and served as the butler to his Uncle George.
George dominates Langan's story, even though quite a bit about him is left vague. George traveled the world, acquiring along the way, and losing, through divorce, a wife, as well as a son named Peter, of whom George won full custody -- a fight he waged not, it must be stressed, out of love for the child, but out of a desire to hurt his wife. He also acquired the impossibly thin Mr. Gaunt as his butler, a cruel streak a mile wide, and a great deal of money. How he did most of this is, as I said, left intentionally vague. It doesn't need to be more clear than it is, because what matters is that George is plainly amoral, a full-blown sociopath who is doing far too well for himself for him to feel the need to wonder why he does awful things and yet experiences no guilt.
At one point, Henry's father relates to him a story about having a conversation with George, during which George reveals to him the horrific truth behind what his brother thought was a family mystery. The real story is shocking, vicious, and largely the doing of George. The victim of this is George's own son, Peter. George says:

"...It is a shame: there would have been a certain amount of pleasure in passing on my knowledge to my son, to someone of my own blood...Nonetheless, while I would not have done anything to him myself, I am forced to admit that Peter's removal from my life has been to the good."
"You can't be serious," I said.
"I am."
"Then you're a monster."

"To you, perhaps," he said.
And who did harm Peter? Who removed him from his father's life? Well, you know the answer to that one. Here's a thing about Langan, and tradition, and his youth: the revelation of what Mr. Gaunt is, or has become, does work well enough, I'll admit, but it's also such a cornball horror convention that it's almost the equivelant of revealing that the vampire in your story is a guy in a tuxedo and black cape with red lining, who has a widow's peak and two big fangs with little drops of blood on each tip. Who also says things like "Bleh!" and "I vant" all the time.
But what the hell, it works. I felt no genuine sense of vicarious dread while reading "Mr. Gaunt", but I did want to know what happened at the end, which, as a creative gift, is rare enough among writers. Which is sort of the thing about Langan: he has good, basic storytelling gifts. This fact (or opinion, if you'd prefer) leads me to the second Langan story I read, called "Tutorial". This curious story is about a young creative writing student named James Williamson, who has been referred by his snooty, uptight professor to the department's tutorial services. This professor detests genre fiction and what he perceives to be a lack of clarity in his student's prose. Here is what he scribbled on one of Williamson's stories (the all caps is Langan's idea):

HOW MANY TIMES DO I HAVE TO TELL YOU, MR. WILLIAMSON, THAT PROSE IS ARCHITECTURE, NOT INTERIOR DECORATION? YOU ARE, I REMIND YOU, A TYRO. ACCEPT THAT YOU DO NOT KNOW ANYTHING AND WRITE ABOUT IT CLEARLY. THE BAROQUE IS OVER.

The professor also says that "[h]orror stories are meant for groups of drunken teenagers sitting around the campfire, not the printed page." I think you can be forgiven if you, as I did, have begun to view "Tutorial" as a bit autobiographical on Langan's part, or at least his way of venting his spleen a little bit. Williamson will go on to face, and reject, a series of tutors, each more persistent (yet also more polite) about holding up the professor's view of literature, until we reach a man known only as the Editor, who reveals certain things to the increasingly uneasy student regarding what, exactly, all this is in aid of. The revelation, the details of which I won't get into, reveal a great deal about the kind of frustration Langan must have felt when he found his early horror stories rejected by his teachers. This is no doubt a fairly common occurrence, and I'm with Langan completely regarding the off-hand dismissal of any genre based on the lone fact that it is genre. But "Tutorial" as a whole reveals a great deal of off-putting youthful arrogance, and even ignorance, on Langan's part. 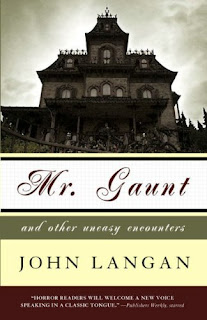 For one thing, look at that all-caps professor's note. "The Baroque is over". Well, maybe I'm reading way too much into "Tutorial", but Langan's own prose is, actually, quite clear -- but also, yes, occasionally clumsy -- and not even close to Baroque. We get samplings of Williamson's prose style as well, but that can only be considered Baroque if by Baroque you mean "not minimalist". I would allow for the possibility that Langan intends for the entire genre of horror and other fantastic fiction to be, by definition, Baroque, and such an argument can be made, but it's Langan who makes such a big deal about prose itself.

The ending is the real kicker, though. Early in the story, Williamson's professor is revealed to be an elderly writer who has made his name writing books about elderly men getting their rocks off with younger women. I think we can agree that this is a literary genre unto itself, but I can't help projecting my own youthful prejudices onto Langan. I used to sneer at this sort of thing myself, you see, and placed John Updike and Philip Roth as that genre's chief practiotioners. I used to think of them as a couple of guys who were beloved by the elite (that part's true) but who couldn't tell a story -- the primary function, I thought then, and still think now, of fiction -- to save their lives. Then I decided to actually read them both, and while I still can't get on with Updike, I've become quite taken with Roth and his precise, almost subliminally powerful prose, which is usually in the service of some pretty high drama.
But Langan, through Williamson and the story, comes across as a kind of benign Alfred Muswell, from Mark Samuels's "White Hands" (see yesterday's post): it's horror fiction, or it's nothing. At the end of the story, Williamson has chosen to defy his Lovecraftian writing teachers, and has returned to writing horror. Langan presents this as a revolutionary act:

Did the Editor notice that the dimensions of his office seemed to be changing, that it appeared to be shrinking around him?
And, I mean, please. I realize that this is just Langan the one-time frustrated writing student getting back some of his own, but let's not go nuts. No writing, or any kind of art, is that powerful, even metaphorically speaking, and it also doesn't help that Langan is essentially battling against one type of aesthetic bias by smacking it in the teeth with another one.
I know you're angry, man, but put down the axe and don't be afraid to read a little bit outside of your field every once in a while.
Posted by bill r. at 11:00 AM

I defy my Lovecraftian blog mentors regularly. Do they notice, I wonder, their basement computer stations getting smaller, closing in around them? Probably not. Anyway, if you'll excuse, my big warm bowl of smug is ready, fresh from the oven.

Yeah. I found myself being more negative in this post then I originally thought I'd be, but getting into the subtext of "Tutorial" as I wrote about it revealed how juvenile and obnoxious it really is. It's a fun story to read, I'll admit, but not always for the reasons Langan intended.