Because T. E. D. Klein made me feel bad about my reading habits, I decided that, on returning to The Dark Descent for a look at David G. Hartwell's "second stream" of horror fiction, I would read a classic story by a major pre-20th century -- or earlier -- writer, with whom I was previously unfamiliar. The stories in the second part of The Dark Descent, while offering many classic tales, only really has one that meets those standards: "Schalken the Painter" by J. Sheridan Le Fanu.
. .
I'm going to try to distract everyone from the awfulness of admitting that, before today, I'd never read Le Fanu by starting off with a look at what Hartwell considers the "second stream" of horror fiction: psychological metaphor. One could argue that the entire horror genre is made up of psychological metaphor, but when Hartwell uses the term, he specifically means this:
..
What characterizes [stories in this stream] as a group is the monster at the center, from the monster of Frankenstin, to Carmilla, to the chain-saw murderer -- and overtly abnormal human or creature, from whose acts and on account of whose being the horror arises.
.
Hartwell also says that these stories can either be purely supernatural, or purely psychological, and he uses Robert Bloch's Psycho as an example of the all-psychological horror story. The way I'm reading Hartwell, however, is that the metaphor at play here involves a powerful, otherworldly evil standing in for true human evil -- as opposed to the cosmic, metaphysical evil in Hartwell's first stream -- and the helplessness that average, moral humanity feel in the face of it. Where is such a metaphor in Psycho? Is Norman Bates a metaphor for Ed Gein? If that's the road we're taking, everybody in every work of fiction in any medium is a metaphor.
.
Anyway...perhaps I'm nitpicking, particularly when you consider that Le Fanu's "Schalken the Painter" works as a metaphor just fine. Le Fanu's story is very simple. We begin with a description of a painting by Shalken, an artist, we are told, who has achieved great fame over the years. Le Fanu writes (in the voice of an unnamed and third-person-observer narrator):
.
The picture represents the interior of what might be a chamber in some antique religious building; and its foreground is occupied by a female figure, in a species of white robe, part of which is arranged so as to form a veil. The dress, however, is not that of any religious order. In her hand the figure bears a lamp, by which alone her figure and face are illuminated; and her features wear such an arch smile...in the background...in total shadow, stands the figure of a man dressed in the old Flemish fashion, in an attitude of alarm, his hand being placed upong the hilt of his sword, which he appears to be in the act of drawing.
. 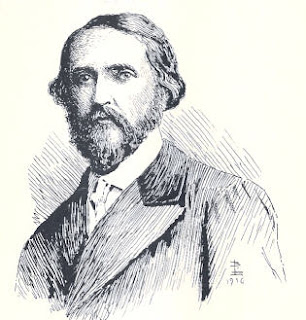 The story of the painting -- which is what "Schalken the Painter" is -- is this, in a nutshell: in his youth, Schalken was a disciple to a great painter named Gerard Douw. Schalken is also in love with Douw's niece -- unbeknownst to both her and Douw -- who is named Rose Velderkaust. Schalken is convinced that, before he asks for Rose's hand, he must make something of himself, because though he is already a talented artist, he was "poor and undistinguished". But, while he works towards this, a ghastly figure who goes by the name Minheer Vanderhausen swoops in, offers Douw a load of money as a dowry, and presses Douw aggressively for Rose's hand, himself. Douw is uncertain, but money's money, and he acquiesces.
.
Schalken doesn't even realize this has happened until much later in the story, and, in fact, Schalken is at best a supporting player here, existing mainly to paint the picture with which Le Fanu opens his story. But Schalken is around for Vanderhausen's appearance for dinner at Douw's home. Vanderhausen's face is almost completely covered, and what skin that can be seen is "coloured with a bluish leaden hue". Further:
.
There was something indescribably odd, even horrible, about all his motions, something undefinable, that was unnatural, unhuman; it was as the limbs were guided and directed by a spirit unused to the management of bodily machinery.
.
Also, he doesn't ever breathe. But Douw marries off his daughter to him anyway, and doesn't freak out until he isn't even payed the money Vanderhausen promised him. Douw is mean, I think, to be painted somewhat sympathetically, and his actions down the line aren't quite so venal as his early behavior, but his motivation all along is money, and for the promise of it he marries he hands his daughter over to a blue guy who can't even move good.
.
Actually, he really marries her off to a vampire. Le Fanu, of course, wrote Carmilla, one of the first major pieces of vampire fiction, and while Vanderhausen is portrayed, by the end, as something closer to a ghost, or a demon, his relationship to Rose, the story as a whole, is not at all unlike that of Dracula to Lucy, Mina, and Stoker's novel. He presents himself as an aristocrat who desires a young, virginal beauty, and, when he has her, appears to gradually drain the life away from her. He can appear in some manner of corporeal form, or vanish into nothing. He may not have the same weaknesses as Dracula, or any weaknesses at all (why is he so alarmed in Schalken's painting, I wonder?), or he may be just as vulnerable, but our characters aren't smart enough to figure it out.
.
If we want to take full hold of Hartwell's metaphor idea, then "Schalken the Painter" could be an utterly cold-eyed look at the practice of marrying daughters off, against their will, to men who are, basically, total strangers. From this angle, the psychology being represented here is actually Rose's -- after all, how many young girls found themselves being passed from their supposedly loving family into the arms of a much older man who could do whatever he pleased with her? How many of these girls regarded this exchange with absolute horror, and viewed their marriage as a living horror? A good number, I would imagine, even if those marriages were relatively free of actual physical violence. They were also free of happiness, warmth, or peace of mind. In short, they were a nightmare.
Posted by bill r. at 6:58 PM

Ah, I love Le Fanu. "Green Tea" is my favorite of his short fiction. This one was good too. His vampire stories were very, very sexy, as all good vampire stories should be. (Actually, all good Victorian fiction of any kind is very sexy.)

I've heard great things about "Green Tea", but I don't think I have it anywhere. Or at least, I don't know that I have it. Man, there's so much in this genre I haven't read...