The Kind of Face You SLASH!!! - Day 17: A Confirmed and Studied Misanthrope

Very often, I experience pangs of nostalgia for a time period I didn't even live through. Speaking very broadly, I would love to have been able to experience America from the 1890s through the 1940s. I know that's a pretty hefty chunk of time, but just imagine being born in, say, 1880, and then experiencing the the color, culture, history and progress over the next seventy years.
..
The color and the culture, though, is really what I'd like to experience -- the day-to-day life of the first half of the 20th century. Greg and I have talked about this before, but both he and I share a fantasy of having a diner, or coffee shop, that was our place, circa, say, 1943 (for me -- I think Greg would prefer sometime in the 50s, but you'd have to ask him), and in the morning we'd go in, and greet all the other regulars, and we'd order our coffee and eggs, chat up the snazzy tomatah at the counter, and be at peace. I don't know what Greg would bring for reading material -- he and I would not be going to this diner together, or, if we did, we would not be on speaking terms -- but I'd bring Weird Tales. Or Collier's. Or Astounding. Or Ellery Queen's Mystery Magazine. Anything with short stories, basically, the kind of stories that everybody read and would later talk about over, I don't know, pickled lettuce at the local eat-center. I don't really know much about history. Regardless, I'm talking about the kind of stories that I imagine being read in diners, or on buses on the way to or from work, or school; the kind of stories with strange premises and stingers at the end; the kind of stories that predated and inspired Alfred Hitchcock Presents and The Twilight Zone.

One of the writers I'd be sure to read while I scarfed down my eggs would be Davis Grubb. Almost entirely unknown today, and therefore unread (including by me, until about three hours ago), Grubb's most famous work is the novel The Night of the Hunter, which, of course, was adapted into the much more famous Charles Laughton film, starring Robert Mitchum. Because that's one of my favorite films, I've always been curious about Grubb, but apart from idly buying several of his books as I came across them over the years, I'd never taken the most important step of actually reading a word he'd written. Fortunately, one of those books is called Twelve Tales of Suspense and the Supernatural, so this horror project dealie I got going here is the perfect excuse to finally give him a look.

The first story is called "One Foot in the Grave", and it's...odd. It's about a guy named Henry who manages a sawmill in the South who suffers a very nearly fatal accident. He's saved by one of his employees, Ed Smiley, but though Henry survives, he still loses a foot. As the story opens, he's recuperating in the home/office of Doc Sandy, and immediately Henry finds himself suffering from "phantom limb" syndrome: his missing foot itches, or gets cold. Doc explains the reason for this as best he can, and urges Henry to relax, because soon he'll get used to the crutches, and not long after that they'll have him fitted with a prosthetic, and that'll be that. In the meantime, Henry is visited by Ed Smiley, and Margaret, another sawmill employee who is going out with Ed. 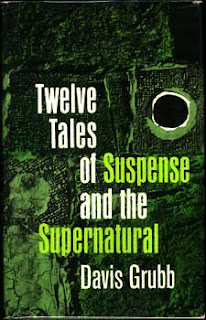 Things are going well enough, until Henry starts to sense that his missing foot is actually moving around...walking through town, as a ghost. Not only that, but apparently it's been following, and frightening, Margaret.

I know -- pretty stupid. But still, the thing works okay. It's the kind of story you find yourself wanting to finish despite yourself. You shouldn't care about what happens in a story with such a goofy central idea, but I, at least, found myself eagerly turning the pages anyway. It doesn't hurt that Grubb ain't a bad writer. His skills are better represented in the second story I read, but even in "One Foot in the Grave" his storytelling skills are on clear display.

That second story is called "The Horsehair Trunk" and, interestingly, it also deals with illness and jealousy. The illness in this case is typhoid fever, and the man suffering from it is named Marius Lindsay. Marius is a rotten bastard who mocks and accuses his unhappy wife, Mary Ann, of wanting him to die, even as she cares for him. He doesn't die, and, in fact, as he breaks through the worst of the fever, to the recovery on the other side, he finds that he can actually detach his spirit from his corporeal body, and move invisibly around, causing havoc. Why Marius is suddenly able to do this isn't really explained -- it's vaguely hinted that he very nearly did die, but snapped back just as his soul was preparing to ascend -- but Grubb doesn't need to, either. The story is short and to the point, so he throws the idea out there and runs with it, expecting the reader to follow along. I did.

Marius Lindsay was already a rotten person, but his newfound power -- which he obviously tells no one about -- makes him worse:

...[E]ven those who knew him least were able to detect in the manner of Marius Lindsay that he was a changed man -- a worse one. And those who knew him best wondered how so malignant a citizen, such a confirmed and studied misanthrope as Marius, could possibly change into anything worse than he was. Some said that typhoid always burned the temper from the toughest steel and that Marius' mind had been left a dark and twisted thing.

Quite possibly, because when he discovers that her poor wife -- whom he despises -- is planning to leave him for another man, he devises a plan to get revenge. As you knew he would, but the outcome of his plan is, I must say, handled so well that I actually chuckled out loud while reading the last few lines, nasty though they are. "The Horsehair Trunk" would have made a perfect Alfred Hitchcock Presents, and it makes me wonder if any of Grubb's other stories were ever adapted for television...

So then, I'll finish reading the story, and I'll elbow Greg, sitting next to me at the counter, and say, "Hey, chumley, did you ever read anything by this Davis Grubb character?" "Naw," he'll say. "Readin's fer old ladies!"

Silently, I will pity him, and cover the awkward silence by quickly changing the subject to Secretariat, Hitler, Dick Powell and cabbage. Or whatever, what am I, a time machine?
Posted by bill r. at 8:26 PM

Labels: Davis Grubb, The Kind of Face You Slash, The Night of the Hunter, Twelve Tales of Suspense and the Supernatural

Not on DVD, but of possible interest, is Andrew McLaglen's film of Grubb's Fool's Parade. I introduced my mom to Night of the Hunter a few years ago when it was on TCM. Grubb's third novel, The Watchman was in her book collection.

I added Fool's Parade (the book, which is, surprisingly, still in print) and The Watchman to my Amazon Wish List last night. I do plan on reading more of him.

"The Horsehair Trunk" was adapted for an episode of the 1st season of ROD SERLING'S NIGHT GALLERY, "The Last Laurel" with Jack Cassidy and Martine Beswick.

... and speaking of ALFRED HITCHCOCK HOUR, they did do one of Grubb's best known stories, "Where The Woodbine Twineth".

I love talking about Secretariat! That fucking horse was FAST!

Anyway, as I said on Facebook it was a busy weekend so I'm just getting around to this. I would of course bring non-fiction. It being the fifties I would probably have read General Leslie Groves self-serving "Now it can be Told" which didn't really tell much of anything it being the time but also because of the time there were as yet no other books available on the subject, like Day One, The Men Who Built the Bomb, Brotherhood of the Bomb and so on so I would be forced to read it. Upon finishing I would turn to you and say, "Can you believe this shit? Mother fucker wants me to swallow that they never intended to hurt civilians - with a bomb - that destroys cities!" Then you'd laugh and say, "Things people say huh?". And then I'd laugh and say, "Hey Bill, how 'bout another cup of Joe?"

L. Rob - Well, there you go! I was right! In a manner of speaking. I'm pretty sure NIGHT GALLERY is on DVD, right...?

Greg - Then I'd say, "Nah, that stuff rots my gut! I need me some seltzer water. Hey, Madge, how's about a little seltzer, hah? And a tuna fish ta go!" Then you'll say, "Nuclear weapons...will the world ever learn!?" But by that time I'll have already left.

And Fred, walking towards the door, will arch his back while an "almost made it" look comes over his face.

"He headed up Los Alamos you know? Boy, the stories I could tell you about that."

Fred sits down and grimaces while mumbling to himself, "Bill. Fucking Bill. I'll get him for this."

Yes, both the first and second (& Best) year of NIGHT GALLERY are on DVD. The Grubb story was broadcast during one of the later seasons of ALFRED HITCHCOCK PRESENTS, so it might also be on DVD, too - not certain if all of the AHP have been released yet.

In time for next year's installment, you might keep your eyes peeled early next year for the release of the THRILLER program, which included an adaptation of Robert Howard's PIGEONS FROM HELL.