The Kind of Face You SLASH!!! - Day 19: I'd Rather Be Where People is Friendly

For the next couple of days, I'm going to be flying totally blind. I have Lord only knows how many books and anthologies by, or containing stories by, writers I know virtually nothing about, and I'm going to be picking a few of those, more or less at random, and see how things work out.

Today's writer is Peter Crowther, a writer who, I suspect, is not exactly unknown in the horror community -- a community I sometimes feel is gated, although I'm probably not trying that hard to gain admittance. Oh, hell, I'm not trying at all. But I have known Crowther's name, as an editor, for some time. In the 90s, he produced a series of horror anthologies, many of them dealing with the theme of superstition: Blue Motel, Tombs, Knock Wood and so on. It was only recently that I discovered he was a writer himself, when I found a collection of his stories called The Longest Single Note. The title struck me, because I'm often drawn to horror books, and films, whose titles don't sound like they belong to that genre (see also Let the Right One In). Given that, you'd think I would have read the title story, and that had been my intention, until I was glancing at the back cover, where I found this brief summary of one of the stories: ...a dust-bowl werewolf traveling the shantytowns of the Great Depression...

Well, I mean! What choice did I have? Strangely, The Longest Single Note doesn't have any sort of introduction or story notes (strange because these are typical features of collections of genre stories), but I was able to locate, and read, the werewolf story in question, which is called "Bindlestiff". It's not often -- certainly not this month -- that I read a horror story and think it should be longer. Better, yes, but not necessarily longer. "Bindlestiff" is, in that sense at least, unique, because I think it should have been a good thirty pages longer. That's not because it was so incredible that I never wanted it to end, either. There are two basic problems with "Bindlestiff": it didn't need to be set during the Great Depression, and it's only 18 pages long. And expansion of the story would no doubt have solved the first problem. 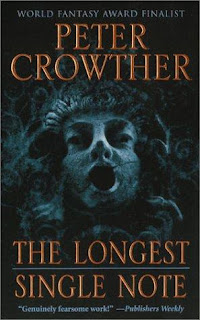 The central character, the werewolf, is a man named Walker Lange. Bitten by a werewolf in Manhattan, he now travels -- out of necessity, I sensed -- through the Hoovervilles located out west. His transformation from man to wolf appears to take a couple of days, as opposed to the few minutes those familiar with werewolf stories are used to. These means that Lange's hunger begins before the full moon, but his body and face change shape gradually, and he can't feed until the transformation is complete. He's at one of these awkward early stages as he wanders through a Hooverville, looking for a quiet place to complete his change:

A little farther on, a group of men were cooking a jack-rabbit on a makeshift spit. "Hoover Hogs" the hobos called them, welcome dinner "guests" since the collapse of livestock prices. One of them was talking, his eyes lost in the flickering embers of the fire. "Farmed shares in El Reno," he was saying as Lange shuffled by. "Dusted, busted, but never rusted," he finished off, the statement bearing all the hallmarks of careful rehearsal. The man chuckled to himself as he said it, looking up at the others for nods of approval. There were none. There was only the gentle heat of the morning. The man looked back at the fire and continued. "Drove west in '34. Picked peppers and butter beans at Oxnard, California." He shook his head. "Came home in '35. I'd rather be where people is friendly."

This is a good passage, possibly the best in the whole story, and one of the very few that concentrates on the specifics of the Great Depression. Elsewhere, poverty is described in terms that could apply today, if relocated to certain other parts of the country. Crowther sets "Bindlestiff" in so specific a time and place, and yet spends so much of his 18 pages describing Lange's transformation and desire for food. I think there is such great potential in Crowther's idea -- a guilt-ridden monster preying on the most vulnerable in a richly drawn historical setting -- but the details are too often standard werewolf story boilerplate. Lange must feed, yet he feels guilt over the murders he's committed. Certainly, something like this is to be expected, but why suck up so much of your time -- and my time -- when you have something truly unique, shoved into the background? And, at 18 pages, much of Lange's psychological torment must be taken as a given, because we know nothing about him. Obviously, this is one of the perils of short fiction, but a great short story strikes just the right balance. Here, the scales are all out of whack.

Crowther dedicates The Longest Single Note with this appreciation:

Affectionately dedicated to all practitioners of the short story form...and to all those readers who support them. Small is beautiful -- spread the word!

Amen, but short doesn't have to mean too short. Crowther has written novellas -- or so the "about the author" page tells me -- and I'm flummoxed by the fact that he apparently didn't consider going that route with "Bindlestiff". As I said before, even another thirty or forty pages could have fleshed this out wonderfully. What we're left with is no more than a sketch of something greater. I don't get it.

I don't want to -- and can't, really -- come down too hard on Crowther, because "Bindlestiff" is just one story, and any short story collection, unless it was written by Tobias Wolff, is going to be uneven. They can't all be winners, and all that. But man, was this one frustrating.
Posted by bill r. at 4:48 PM

Perhaps I am ignorant or didn't read the piece carefully enough but the "wear"/"where" pun has me confused. Is it supposed to be "were" as in "werewolf" instead of "where"?

The title should have said Where. I am a moron.

Ah, I see. Lucky I'm not afraid to admit not getting something. I'm sure others thought, "That's probably a really clever reference to something but I don't know what it is so I just won't mention it."

Hell, I even googled it to see if it was a famous written line or something before finally giving up and asking.

His transformation from man to wolf appears to take a couple of days, as opposed to the few minutes those familiar with werewolf stories are used to.

No, I think anyone else who read this just assumed I was a moron. Thanks for giving me the benefit of the doubt, though.

As for Crowther's method of werewolf transformation, I like it too, and I'd never thought of it either. But like the Depression, he does nothing with it. He doesn't give himself any time to!