The Kind of Face You SLASH!!! - Day 27: Laughing Down the Hallway 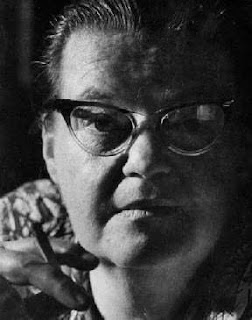 Because I already talked briefly about Shirley Jackson in yesterday's post about Fritz Leiber, I'm tempted to just jump right into talking about today's story, which is, in fact, Jackson's own "The Daemon Lover". The story is taken from her landmark 1949 story collection The Lottery, a book that is actually sometimes subtitled The Adventures of a Demon Lover -- whether or not there is any connective tissue between these stories, in the form of a tall man in a blue suit, I don't know. I've only read a handful, but, for instance, "The Lottery" and "The Dummy" seem to be entirely their own things.
.

Either way, in "The Daemon Lover" itself, the title character is a man named Jamie Harris, and he's never actually seen. The whole story is told through the eyes of an unnamed woman who believes she's about to marry him. When we meet her, she has just abandoned writing a letter to her friend that begins:
.
Dearest Anne, by the time you read this I will be married...
.
As though it were a suicide note. She is very happy, though, or thinks she is. She obsesses over cleaning her apartment and looking her best for Harris, who is supposed to meet her at 10:00 that morning, and off they'll go to be married. By 10:30, he still hasn't arrived, nor has he arrived by 11:00, or by 1:00. Becoming worried, she decides see if she can find him. She first goes to his own apartment, to find that he's just moved out. Believing that maybe he's on his way to her apartment now, she retraces her steps, asking several people -- a man who runs a newsstand, a shoeshiner, a florist (because maybe he stopped to get her flowers first) -- if they've seen a tall man in a blue suit.
.
That's the best description she can give anyone, because, as she noted earlier:
.
...she tried to think of Jamie and could not see his face clearly, or hear his voice. It's always that way with someone you love, she thought...
.
This is the reader's first tip that something is quite wrong here, although "The Daemon Lover" never quite tips over into full horror, and an argument could in fact be made that it's not a horror story at all. I believe it is, but the main character is a shy, naive, deeply unhappy woman who believes herself unattractive, and, at 34, old. The world around her seems more than happy to encourage her low sense of self worth: practically every person she asks for help is either rude, even deliberately misleading (the man at the newsstand claims to have seen the tall man in the blue suit, but it's clear to the reader that he's messing with her), or plain indifferent. So Jackson's story could simply be a dark, sympathetic portrait of a certain kind of woman, and the world's view of a woman's place in the 1940s.
. 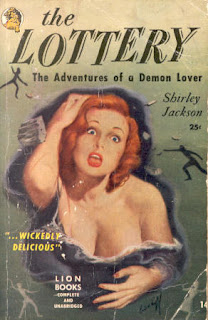 Except that much of the indifference the woman encounters is downright grotesque. At one point, she's standing on the sidewalk, at a loss, and Jackson describes a woman looking down at her, and calling someone else over to have a look, too. What are they looking at? What's to be entertained by? Only the distress of an unhappy woman.
.
There's also the fact, of course, that she can't remember what the man she plans to marry either looks or sounds like, as well as this cryptic description of the last time the two of them spoke:
.
Half-consciously she set her clock back a minute; she was remembering her own voice saying last night, in the doorway: "Ten o'clock then. I'll be read. Is it really true?"
.
And Jamie laughing down the hallway.
.
Some of the people the woman asks do seem to be giving her good, honest information about the tall man in the blue suit. The shoeshiner says he did see such a man walking in the direction of her own apartment, carrying flowers. A young boy confirms, somewhat nastily, this information. However, the place she's finally led by these directions are not her apartment, and the story ends on a note of the subtlest dread, and sadness, and despair.
.
If "The Daemon Lover" is indeed a horror story, and I believe that it is, then it is incredibly circumspect about its own genre. Even Robert Aickman never, in my experience reading his work, went this far into the inexplicable and subdued. Still, this is much to the story's credit, in my view. The last few lines of the story really flared my imagination, and I went from wondering if I wouldn't have to find another story to read for today to being genuinely haunted.
.
In "The Events at Poroth Farm", T. E. D. Klein's narrator talks about reading some Shirley Jackson. He says:
.
Read some Shirley Jackson stories over breakfast, but got so turned off at her view of humanity that I switched to old Aleister Crowley, who at least keeps a sunny disposition. For her, people in the country are callous and vicious, those in the city are callous and vicious, husbands are (of course) callous and vicious, and children are merely sadistic. The only ones with feelings are her put-upon middle-aged heroines, with whom she obviously identifies. I guess if she didn't write so well the stories wouldn't sting so.
.
Well, yes.
Posted by bill r. at 4:11 PM

Labels: Horror, Shirley Jackson, The Kind of Face You Slash, The Lottery

Cultural synchronicity - Penguin Modern Classics have just republished three of her books, including The Lottery, and I was already considering buying one, never having read her.

You've just given me that final extra push I needed.

Great series, so far, by the way.

Thank you, David. I'm assuming the other two books are THE HAUNTING OF HILL HOUSE and WE HAVE ALWAYS LIVED IN THE CASTLE, right? Both novels are excellent, and I recommend them without reservation.

Yeah, those are the other two, recommendation noted.

I have read before that The Haunting of Hill House was great but avoided it for fear of it sparking flashbacks to that horrendous Jan DeBont adaptation. You know, involving Owen Wilson improvising about teletubbies or Catherine Zeta Jones pouting...

Wow,the cover of the book really doesn't suggest "The Lottery" to me (or this story either).

The things they do to sell books....

I remember reading teh story "The Lottery" in high school and being quite taken with it, but then in those days I was a fan of anything that denigrated small town life and people. I'd like to read the other stories in this book.

David - The Jan De Bont movie is a travesty. Wipe it from your memory. If you haven't already seen Robert Wise's film THE HAUNTING, then see that right after reading the book. It's a great movie.

Pat - "The Lottery" is a very good story, although I never took it to be speficially about small-town life and people. I mean, it is, but Jackson was able to see the bad in everybody. The city-dwellers in "The Daemon Lover" are monstrous.

In any case, "The Lottery" is her best known story, but THE HAUNTING OF HILL HOUSE is, in my experience, her masterpiece.

I've seen the Wise film but so long ago I can barely remember any details. Funny how I can remember specific, awful scenes from the DeBont but nothing from the Wise.

Pat, I've never read horror fiction (which is why my comments here are either stupid jokes or stupid observations or if I'm lucky, both) but I have noticed a striking similarity in bookstores between the covers of horror, sci-fi and romance. It's like they have an all-purpose sex cover template that they rotate through the genres.

Routinely, horror book covers are the worst. Small print stuff that respects the writers, or only publishes what they consider high-end stuff, can be really nice and classy, but historically horror novels all look like utter trash, whether they actually are or not.

However, I kinda like the LOTTERY cover I posted. Completely disconnected (even contradictory) old-timey sexism at its finest.

Penguin generally give their Classic stylish new covers and heres the new Lottery one: