.
I first heard about Brian Evenson on Sept. 26 of this year, when, in the comments section of this post, the mysteriously named frequent commenter "otherbill" offered Evenson up as a suggestion of a writer I might wish to take a look at this October. In response, I claimed that Evenson sounded vaguely familiar, and while I'm sure I believed it to be at the time, now that I've researched Evenson a bit I'm pretty sure otherbill's mention of him was the first I'd encountered. But mention Evenson I'm glad he did, because this is a writer I would hate to have missed out on.

The essential fact of Evenson's biography, as a writer at least, is that he used to be a member of the Mormon Church, and a teacher at Brigham Young University, and is no longer either one of those. In the case of his split with the church, my understanding is that it more or less immediately followed the publication of his first collection of stories, called Altmann's Tongue. Though I've read nothing of that book, a quick perusal of his subsequent work -- four more story collections and four novels -- shows a certain dark preoccupation with the Mormon faith, and a not necessarily glowing regard for its history or contemporary practice. As for Brigham Young University, well, for some reason Evenson's resignation letter is available online, so I'll leave that to you.

Evenson is largely unknown, but beloved by those who are familiar with his work. He has been praised by Peter Straub, Kelly Link, George Saunders, Samuel R. Delany, and collector of obscure writers throughout history, Jonathan Lethem. He has been compared to Edgar Allan Poe, Samuel Beckett, Jim Thompson, J. G. Ballard and Paul Bowles. Who, I think it's fair to ask, the fuck is this guy? I can't even really ask "Where did he come from?" because to a certain degree I have that answer. But I can wonder why I'm just now hearing about him. 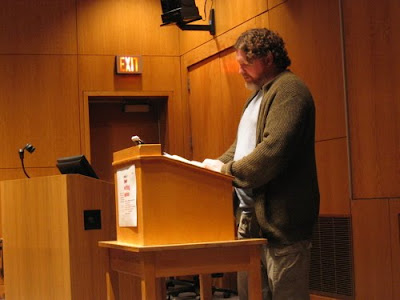 That comparison to Paul Bowles, by the way, strikes a particular chord with me -- now that someone else has mentioned the two writers in the same breath, I can nod wisely and say "Yes." Both of the Evenson stories I read for today (not the only ones I've read, though), taken from his 2004 collection The Wavering Knife, have that same creeping distance and merciless progression towards a horrible doom that can be found so often in Bowles's stories. Not just Bowles, but Thomas Ligotti, another writer I found insinuating his way into my mind as I read Evenson's "The Wavering Knife". That story begins like this:

Despite the unfortunate and increasingly serious illness of my benefactor, I continued to work without cease or rest to salvage my analysis of the Gengli oeuvre. The image of the wavering knife, which I had for years perceived as the unifier and ultimate hingepiece of Eva Gengli's philosophy, had, under the severe scrutiny made possible by her private papers, collapsed, and I could discover no adequate trope to stand in its stead. Indeed, Eva Gengli's private papers had led me to realize with an alarming degree of clarity that the Gengli philosophy was exceedingly more complex than I had first imagined.

Already, with the philosophical works of Eva Gengli, we're dealing with the kind of scholarly arcana often found in Thomas Ligotti's fiction, and, indeed, in weird fiction going all the way back to whenever it is that all began. Except here, Evenson has removed the supernatural element; he's even removed the question of it. "The Wavering Knife" is unambiguously the chronicle of a disintegrating psychology, in this case the one belonging to our narrator, who will become so deeply obsessed with what would appear to be utter gibberish -- that is, Gengli's philosophy-- that his neglect for his bed-ridden benefactor will become positively demonic:

I might have sat in the same position [contemplating Gengli] for another seven or eight hours except that I began to grow hungry and, growing hungry, realized that I had not fed my benefactor for several days.

Gengli isn't just gibberish, but contradictory gibberish. It's this facet of her work that so winds up our narrator, and which gives this post its title. There's probably an easy point to make about the fractured nature of Gengli's philosophy and how that relates the fracturing of our narrator's mind, but I'm not going to bother to make it, mainly because I don't think Evenson would much care to, himself. The horror of "The Wavering Knife" is the kind that exists above such easy metaphor. At the same time, I don't think it would quite do to call what happens in the story senseless -- it is, of course, but try telling that to our narrator. 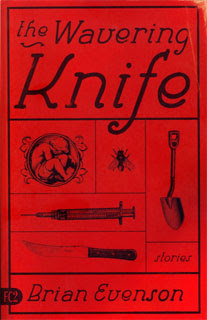 If "The Wavering Knife" casts a chill of unease, disquiet and indifferent brutality, then so does our second story for today, called "The Intricacies of Post-Shooting Etiquette", except this time with jokes. Since Evenson seems to be especially skilled with openings, let's quote the beginning of this story, too:

One winter morning, watching Bein read his breakfast paper, Kohke decided to kill him. He stood behind Bein, aligned a pistol barrel with Bein's skull and worked the trigger. He had reasons for wanting Bein dead, but watching his lover shake about the floor, smearing blood on the linoleum, he could not bring those reasons to mind.

Nor does he ever. Bein goes on to not, in fact, die, despite the fact that Kohke shot him twice (Kohke is bewildered to learn this, believing he'd only shot him once). Bein does go blind from his wounds, and he is rendered paralyzed from the neck down. And even though Kohke would appear to be a complete incompetent (after firing, he hides the pistol in a pitcher of orange juice) he is somehow not prosecuted by the authorities. So what he's left to think about is this relationship with Bein, and how he'd meant to end it, but now it seems to be ongoing, and should he a) visit Bein in the hospital (no, he decides); and b) bring Bein back into the home they once shared together. To this, he decides that yes, he will, though the thought of pushing Bein's wheelchair over the same patch of floor where he'd lain bleeding is just too much, so Kohke rents an identical apartment a few floors down from their old one. When he finally brings Bein home and puts him to bed, Bein notices a difference:

"Welcome home," [Kohke] said. He lifted his ex-lover out of his chair and into the bed.

"Nothing feels the same after you've been shot, Bein."

"The Intricacies of Post-Shooting Etiquette" is mad, black, awful, and savagely funny. The relationship between Kohke and Bein (and that's a big word in this story -- "relationship") is very similar to that of the narrator and his benefactor in "The Wavering Knife", and the brutality of both stories is about as appalling. It's an interesting, even fortuitous pairing of stories for today, though I think it hardly represents every tool in Evenson's kit. I know it doesn't, in fact, as I've also experienced the mild Kafka vibe of "White Square", the wry satire of "Promisekeepers", and the plainly experimental nightmare of "Garker's Aestheticals". Evenson is a major writer. Forget about horror for a second -- Evenson is simply a sensational talent. Take note, everybody.
Posted by bill r. at 11:13 AM

Very glad to suggest something you found so rewarding. I thought his stuff would be up your alley. Also- he's just that damn good.

I discovered Mr. Evenson's writing through this Believer article back in '03- http://www.believermag.com/issues/200305/?read=article_ehrenreich.
I've rarely read anything about an author and been so eager to get my hands on the work in question. The fact that it exceeded my expectations was just icing on the cake. He deserves to be FAR more widely known.

Otherbill, as you can imagine, I'm very grateful to you for bringing Evenson to my attention. I'm just busting to finish up THE WAVERING KNIFE, move on to LAST DAYS, which I also bought, and then order ALTMANN'S TONGUE and FATHER OF LIES and DARK PROPERTY and...

Well, thank you, is all. I hope the word begins to spread, somehow.

What a marvellous coincidence--I'd just discovered Evenson myself the other day through his talking-head presence in the NY Times's article on Matt Reeves' remake of Let the Right One In: his verdict on the original film was "It's as if Bergman had written an after-school special that just happened to have a vampire in it."

& then read The Open Curtain was quite impressed--beautiful writing (the way he handles psychic disturbance--blackouts, personality splitting--is really chilling & effective, & there's a brilliant formal hiccup in the 3rd part of the book), & it's also very much in the tradition of "secret sharer"/doppelganger horror fiction going back to Confessions of a Justified Sinner & Dr Jeckyll & Mr Hyde. I gotta get this short story collection now, too, evidently...