Dark Awakenings by Matt Cardin is an unusual book. Not that I've read it all, but you can tell by the way its contents break down that it's not a typical horror collection. First off, you have your horror fiction, separated into a section called, appropriately enough, "Fictions". There are seven of these, including a novella called "The God of Foulness" (which I'm afraid I did not read for today, something I, having read the first few paragraphs, now rather regret), and they take up about 180 of the book's 300 pages. The remainder of the book is taken up with a series of academic essays by Cardin about the horror genre, and religion, and where the two converge in art and -- so I've gathered is the idea anyway -- in real life. Meanwhile, the dust jacket copy reads, in part:
.
[A]uthor and scholar Matt Cardin explores this ancient intersection between religion and horror in seven stories and three academic papers that pose a series of disturbing questions: What if the spiritual awakening coveted by so many religious seekers is in fact the ultimate doom? What if the object of religious longing might prove to be the very heart of horror? Could salvation, liberation, enlightenment then be achieved only by identifying with that apotheosis of metaphysical loathing?
.
Could be. All sorts of things are possible. But who can know? So that's Cardin's angle anyway, and I'm honestly quite intrigued. As it pertains to a real world philosophy, I believe Cardin is a bit, I don't know...fucked in the head, I think is the term, and more than likely doesn't even mean it, but as a literary philosophy to be applied to the writing of horror fiction, then okay, pal, let's have it. Plus, it's not hard to see from the above why Cardin -- whose second book this is, his first being the 84-page Divinations of the Deep, the contents of which I haven't been able to ascertain -- is often mentioned in the same breath as Thomas Ligotti (and also Reggie Oliver, although in that case the connection isn't as obvious. Anyway, I heard about Cardin in relation to Oliver, when horror critic Jim Rockhill said that Cardin and Ligotti were the only modern horror writers capable of writing at Oliver's level).
.
For the record, the reason I now regret not reading "The God of Foulness" is because of the two Cardin stories I did read for today, one plays as a sort of declaration of intent, or as Cardin's personal horror manifesto, while the other seems to bear no clear relation to that manifesto, and is merely an excellent piece of horror writing (it's better than the manifesto, actually). "The God of Foulness", on the other hand, from my brief scan of its opening pages, is evidently about a religious cult who seeks out disease as a means of spiritual completion. So there you go, that probably would have been good to read, but no, I had to fuck it all up. But enough: let's get to what I actually did read, and see what shakes out.
. 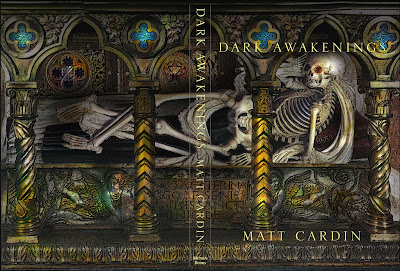 I generally agree with your points about Aickman and Ligotti. Though I don't think it's true so much that Aickman's stories are similar in their details, but rather that his writing is so consistent in style and tone that they clearly belong to the same body of work. "The Medusa" is probably still my favorite Ligotti tale, and probably not coincidentally, it might be his closest in style and spirit to something Aickman might have written.

I suppose you're probably right, regarding Ligotti (although he can recycle material, too). I'm just slightly down on him now because I recently read the two shorter stories from MY WORK IS NOT YET DONE, and they were both kind of a grind.

Should have added that I haven't read "The Medusa", but will do so in the near future.

I'm just dropping in to say how much I'm enjoying (and enjoyed last years) your daily reviews. I read this blog regularly but it's daily destination this month.

Thank you very much, David!

Ah, I should have added, I wholly agree with you on Ligotti and his limitations as a writer, which make even most of his better stories something of a chore for me. I've been dipping into "Songs of a Dead Dreamer" again, from time to time, to see if my semi-lukewarm response on originally zipping through this book (because of strictly limited reading time) about 15 years ago still applies today. And so far, I would have to say yeah, it does.