.
In their introduction to the strikingly titled collection of fiction by Ludmilla Petrushevskaya, There Once Lived a Woman Who Tried to Kill Her Neighbor's Baby, editors and translators Keith Gessen and Anna Summers describe Petrushevskaya as both the most popular writer in Russia today (now that Solzhenitsyn's gone, anyway) and a public figure who continues to be extremely divisive. Summers and Gessen say that many readers object to the relentlessly bleak nature of Petrushevskaya's work (to which I might say "Well, look around you", if that didn't sound so insensitive), while others refuse to accept that great literary respect has been bestowed upon a woman who, among other things, has been known to perform a solo cabaret act "while wearing an enormous hat." I had no idea enormous hats were such a hot potato in Russia, but there it is.
.
The above just about exhausts my knowledge of Ludmilla Petrushevskaya, the public figure. I have a little bit more experience with her fiction, having now read the majority of There Once Lived a Woman Who Tried to Kill Her Neighbor's Baby (a title I refuse to shorten, so catchy do I find it) -- I've read enough of it, in fact, to know that it's subtitle, Scary Fairy Tales, is at least a tiny bit misleading. Though my past reading from the book yielded a number of horror or horror-tinged stories -- "The Arm", "Incident at Sokolniki", "The God Poseidon", the plague story "Hygiene" -- last night caught me floundering through the unread stories, trying to find something that I wouldn't have to twist myself into knots trying to justify as horror. It's a sad story, I know, but this is what I sometimes have to go through. The point being that Scary Fairy Tales is a rather reductive description, or at least the "scary" part is -- it is true that all of the stories from the book I've read so far have an unmistakable fairy tale ring to their prose; some more than others, but it's always there. But "scary"...not always. One story I read, "The Miracle", featured mysterious portents and gutter prophecies and all that, but, for once, ended on a note of obscure uplift that cast the whole story into an odd, new, horror-less light. Same thing with "The Father", which features a childless father tramping through the snow to a mysterious hut and finding a baby that looks like an old man. Even these horrid beginnings are eventually transformed into a story of paternal fulfillment (sort of, and also, I think).
. 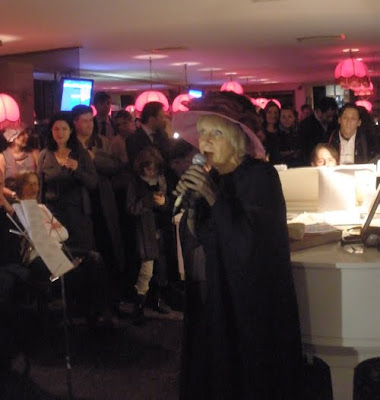 Two stories did eventually fit the bill, however, or as close as I was able to get. The first, called "There's Someone in the House", is an especially odd duck of a story about a woman who believes there is a poltergeist in her home, and decides to go to war with it, all the while reflecting on what would appear to be her own difficult childhood, where she suffered at the hands of an overbearing stage mother. The woman's method of battling this ghost is particularly warped, however:
.
It clearly wants something, this Creature, It's trying to get at something...Now if she could just figure out what It wants, she could -- she's done this before -- defeat Its design. She could seize the initiative. That's a classic maneuver -- meet your enemy halfway. Like when they light a fire to battle another fire in the forest -- if they intersect in the right spot, they'll both go out for lack of oxygen.
.
Once upon a time, for example, the mother had owned an expensive set of German china...and she guarded this china with her life in case they'd have to sell it to pay for a funeral (hers) -- and one time, when, in a fit, the daughter had hurled one of the cups to the floor, the mother cold-bloodedly began smashing the rest of the set ("slut!" went the noise it made, "slut!"), piece by piece by piece, nearly driving her daughter insane, and declaring, to top it off, "I'm going to die, all right, but you'll be left with nothing."
.
That's how her plan to defeat the poltergeist is summarized, so it's fair to wonder how much of this ghost business is actually on the level. No matter, though, because clearly the woman -- who eventually comes to be referred to in the story as "mother-daughter" -- believes it, and she proceeds to demolish her apartment before the poltergeist can do it first. "There's Someone in the House" is clearly not a chronicle of a ghost infestation, but rather one of a damaged psyche finally cutting loose, with a subplot about how all this is effecting her cat. It's a weird little story, full of more pain than I'm probably getting across here. "Is there a ghost or is s/he mad?" stories being very common (as I think I've mentioned) in the horror genre, "There's Someone in the House" fits in nicely, even though I think the answer is pretty apparent. Either way, in all manifestations of this idea, the answer is often thought to be beside the point, and while that doesn't always play for me, in a perverse way it does here. No, I don't believe there's a ghost. However, yes, she does. As a result, her wide-eyed, stumbling progress into some kind of happiness at the end may be objectively phony, to someone who doesn't live in her head, but if she believes it then at least that's something.
.
On an even more obscure note, the next story is called "The Fountain House", and it begins like this:
.
There once lived a girl who was killed, then brought back to life. That is, her parents were told that the girl was dead, but they couldn't have the body (they had all been riding in the bus together; the girl was standing up front at the time of the explosion, and her parents were sitting behind her). The girl was just fifteen, and she was thrown back by the blast.
. 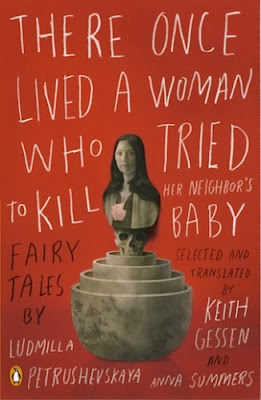 I'm going to admit, up front, something I maybe shouldn't, which is that I don't really have any idea what happens at the end of this story. On a certain level, yes, I do, up to a point. But beyond that point, and in a more general sense, I'm flummoxed. What I do know is that the dead girl's father kidnaps her body from the morgue because he believes she's still alive, and needs to see a doctor. He bribes his way to the hospital, and bribes his way to a doctor, who he bribes to take a look at the girl. The doctor can see she's dead, but he plays along, partly because of the money, and partly because...
.
...there was nothing more important to him than a difficult case, than a sick person, no matter who it was, on the brink of death.
.
And therein lies my difficulty with this story. One the one hand, Petrushevskaya is blunt about the girl being dead. At other times, such as in the first paragraph I quoted, and here again in the doctor's consideration of his task, she makes you wonder. The fact that much of the rest of the story consists of strange dreams had by the father does not go very far towards clearing things up.
.
Which is unimportant, ultimately. What "The Fountain House" is at its core is a story about tearing grief, and the brief flickers of madness it can create in otherwise stable human beings. In its obscurity, "The Fountain House" also leaves open the possibility that a girl is brought back from the dead, and in doing so it marries itself, in my head anyway, to the non-horror Petrushevskaya story I mentioned earlier called "The Miracle". At one point in that story, Nadya, the protagonist, is desperately trying to find a way to phrase her wish, one she expects to be granted, in a way that will minimize any karmic blowback that are often the nasty residue of wishing. During her figuring, another woman lists a series of wishes that came true for other people, and the difficulties and horrors that followed after. What one usually thinks of in these cases is W. W. Jacobs's "The Monkey's Paw". Or at our darkest hours, Stephen King's Pet Sematary. And it follows that, unless I'm completely of the charts in my consideration of "The Fountain House" (a possibility I know to never discount), the father who stole his daughter from the morgue could be facing a nightmare that Petrushevskaya simply couldn't bring herself to tell us about.
Posted by bill r. at 8:39 AM

Labels: Anna Summers, Keith Gessen, Ludmilla Petrushevskaya, October Project, The Kind of Face You Slash, There Once Lived a Woman Who Tried to Kill Her Neighbor's Baby

Petrushevskaya's really incredible. One interesting note: Before she became a renown prose writer, she was considered the best playwright in Russia for about a decade. I actually had the honor of working as her interpreter when one of her plays was performed in NYC, which included nervously mediating the screaming fight she had with the American director.

One of Petrushevskaya's most common devices, but one that never stops working, is flatly and calmly stating things that can't possibly be true, like the teacups making the sound "Slut" as they break. It's a technique that was even more effective in her plays, where the audience can both see what's happening, and hear the inaccurate description.

If you liked her writing, you might want to check out her contemporary, Tatyana Tolstaya. A little more lyrical, a little less grim, but similarly interested in the fractured fairy tale form.