.
Sigh...
.
Okay, let me tell you how I first heard about Carlton Mellick III. Actually, I can't tell you exactly. All I know for sure is that, many years ago, I was dicking around on Amazon, browsing through random books, presumably in my chosen genres, by authors I'd never heard of before. Somewhere along the way, I came across a book called Satan Burger by Carlton Mellick III. The cover of Satan Burger told me pretty much everything I needed to know about Mellick, and I imagine I wondered idly if he was of legal drinking age yet. Or voting age, for that matter. I'm not going to include an image of Satan Burger's cover in this post, because I will not have the good name of this blog sullied in that manner, but some of you are going to want to see it, and instead of being all superior and telling you to look it up yourself, I will include this link. However, be aware that this link is NSFW, and not because it's sexy and awesome. Whether or not you choose to view that link, I will take a moment to note Satan Burger's cover blurb, provided by one "Vincent W. Sakowski" (talk about a get!), which reads: "This generation's Vonnegut!" If so, then may God have mercy on us all.
.
Jump ahead a bunch of years, and I'm shopping for horror anthologies in preparation for posts such as the one you're reading this very moment. I find two massive ones edited by John Skipp, one called Werewolves and Shapeshifters: Encounters with the Beast Within and the other called Zombies: Encounters with the Hungry Dead. Taken together, these collections contain short stories by, among others, Ray Bradbury, Angela Carter, John Collier, Saki, Steve Rasnic Tem, Melanie Tem, Theodore Sturgeon, and Neil Gaiman. And both collections boast a story by Carlton Mellick III. That's some mighty high-toned company for a guy who looks like this on purpose...
. 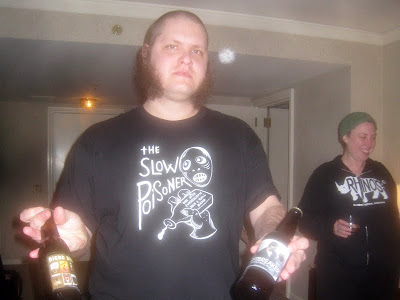 Oh man, I think I cracked a rib laughing.

Which is apparently considerably less pain then you went through reading these.

What do you wanna bet the author or a pal came up with "lemon knives" while drunk or high, decided it was genius and then struggled (well, a little) to find a way to justify it as the title?

It's safe to say I won't be adding Mr. The Third to my library list. I find this sort of review oddly encouraging, as well as riotously funny.

Hopefully that shouldn't even be in doubt. The possibility that there's worse crap being published (or merely printed out for cash) in books today is enough to make one welcome the imminent demise of the form.

I should admit I'm only familiar with the zombie "story" of the two (if by story one can mean simply a buncha randomly strung together words and crudely sketched images with the sole purpose of making somebody go "Dude! Ewwww! Dude! That's like so sick, dude! You're like, a mad genius with words and shit! Dude!") However, I feel confident that I'm missing little or nothing, perhaps even less than nothing, by having not read the other.

By the way, this guy and a few other like-minded writer types describe their deliberately "zany" hodgepodge of comic-book surrealism and sub-pulp gore as "Bizarro" fiction. Y'know, like they've actually invented something new and worthwhile here.

And, yeah, ...Bizarro. Kinda says it all, really, if a writer's not embarrassed to be associated with a label like that. I guess "Sploogy-goo-goo-gorefest" might sound a little more dopey, but not much.

Bryce - Thank you. One thing I didn't mention in this post is that for some perverse reason, before reading these stories, I actually ordered one of Mellick's novels (not SATAN BURGER). I don't know what's wrong with me sometimes.

Frank - I have no doubt that something very like what you describe actually happened. Hell, the birth of "lemon knives" may have occurred just prior to that picture of Mellick I featured here was taken.

John - Yes, Bizarro...I'd actually intended to bring that up, but I decided to completely ditch anything informative. It seems to me that Bizarro is just an attempt to ramp up another "Splatterpunk" (itself a ridiculous name) movement -- Skipp chose to include Mellick in his anthologies, and he was at the forefront of that splatterpunk thing -- but this time around nobody's buying. Well, except John Skipp.

I just looked this guy up on Amazon, he has like a dozen books, most with 4- and 5-star reviews. Sigh. Now I wish I did not know about any of this.

Will, I feel that I can gaurantee you that all of those 4 and 5 star reviews come from within the "Bizarro" community. Try not to let this get you down.

Hey not to be Mr. Recommend's things late in the game, but have you considered doing a bit of "John Dies At The End"? It's horror comedy done right.

It's a novel, but it was originally released online in serial form and I'll bet it's still there, so it could work...

I already have that book, Bryce, and though I want to read it (otherwise I would have a copy, obviously) for some reason I never considered reading it for this project. And frankly I don't think I'd have the time. I barely have any time to devote to novels during all this.

Can I confess I wouldn't run from the literary term "Bizarro" on the face of it? Sure, it's kind of meaningless and dull. I'm hardly in line to become a member of this movement based on the name, and clearly not based on what I now know about its membership, but it hardly sounds like something I'd make an effort to shed.

Mind you, it sounds like if they were literate and/or anywhere near as courageous as they want to appear, they'd have gone with the Harlan Ellison coined "bugfuck".

But it's my experience with the self-consciously outrageous is that they're not really very courageous or creative, so they would hardly be deserving of such a title.

Mind you, if there was a "bugfuck" literary movement, I'd do nearly anything to be a part of it... even if it already sucked.

I almost want to read Mr. Mellick's work now just to have my own opinion, but I'm so far behind on reading things that don't sound ridiculous that I won't bother.

Bizarro is more of a comedy genre, not a gore genre.

Mellick might have his flaws and he might not be to your taste, but he is pretty successful and respected if you can believe it. He's got a pretty massive following, sells tons of books, has made a living as a writer since he was 20, been published in Year's Best anthologies, been translated into several languages, he's a Clarion graduate, and has been praised by people like Cory Doctorow, Chuck Palahniuk, Christopher Moore, John Skipp, Brian Keene, and I think even David Lynch.

He does make you want to hate him (due to his titles, covers, and author photos) and the flaws in his work are easy to find, but he also has a lot of strengths and the people who love his work praise him up and down. Yeah, I'm sure some of his good reviews are from his bizarro friends, but that happens with all authors in all genres. Writers try to support each other.

I'm not saying that any of you should go out and read his work. It's impossible to like something that you want to hate. Plus, it's probably not your thing anyway. I'm just saying that you're probably judging the author and the genre a little too harshly, too quickly.

Praise from Brian Keene does not impress me, as I don't think much of Brian Keene's fiction. I'm a fan of David Lynch, but the idea that he might possibly, who knows, have praised Mellick doesn't impress me either. For one thing, Lynch praised LOOSE CHANGE. For another thing, I read these stories all by myself, and I did not like them at all, either as horror or as comedy.

Dude, you insulted his writing based on his appearance. I don't know much about this Mellick fellow but you just come across as a jack-ass.

Oh yeah, Lemon Knives are real things. Goggle something before you make yourself look even stupider next time.

The realness of "lemon knives" does not make their use in his story any less weak, or poorly written.

By the way, I "Goggled" "lemon knives", and all I found were references to your -- excuse me, his -- story. And also some baking sites.

Bill, of course, needs no help defending his review but I would just like to concur that, indeed, Bill's criticism of Mellick's writing is quite clearly based on his writing, not a personal dislike of the man. He even provides samples from Mellick's writing and then critiques them. So...

Also, right now, I have two orange spoons hidden between my shoulder blades, and a third wedged between my molars and gums.

Greg, I have an apple spork, and last night I put it...well, forget it. The point is, they're real things.

First off, I want to mention that I am the 1st anonymous person, not the 2nd or 3rd anonymous people. I only posted the one comment.

Second off, I'm not trying to argue against your opinion. I think your criticisms of these two stories are fair and valid. Maybe I'm wrong. Maybe you didn't want to hate his work before you read it and went into it with an open mind. I'm not going to dwell on it.

I was just arguing that he isn't the bad writer you make him out to be. Perhaps in your definition of "bad writing" he is a bad writer, but according to thousands of people's (including top authors and editors) definitions of "great writing" he is considered a great writer. That's why he keeps getting published, that's why he keeps selling books. I'm not trying to impress you with these names. It doesn't really matter to me.

I'm not sure if anyone here is an aspiring writer, but if you are I recommend analyzing what is right about these stories as well as what is wrong. He is good enough to get published in big places. That means his work has value that you are not seeing, which is likely due to a lack of writing knowledge on your end. I don't mean this as an attack, because all writers are lacking in one area or another no matter who they are.

>>Also, right now, I have two orange spoons hidden between my shoulder blades, and a third wedged between my molars and gums.<<


I know this was meant to be a joke, but I think it's great. Most of Mellick's work is on the surreal side. It's not uncommon for characters in his stories to pull knives out of their eyebrows or replace their arms with windmills or have an infestation of miniature pirates. Personally, I think this kind of thing is interesting. Perhaps you disagree.

I recommend reading this piece of flash fiction by Mellick:

It is a better example of what bizarro fiction is all about. Surreal comedy.

Oddly, I was, as I said, almost tempted to check out this fella for myself, but his "defenders" kinda turned me off from the idea.

For whatever that's worth.

Neil, there's a link to a free sample just above your head, there. Why not give it a look?