.
Of all the obscure, intriguing, contemporary horror writers whose work is hard to track down, no obscure, intriguing, contemporary horror writer's work is harder to track down than Reggie Oliver. I can't remember exactly where I first heard of him, but I know I was on some internet forum where horror fiction was being discussed, and somebody said that the books they'd most would like to get their mitts on were the three collections written by Reggie Oliver. I was all "Who?" One of the books in question is called The Complete Symphonies of Adolf Hitler, and well, I mean...I'm not made of stone. I became briefly intent on getting my own mitts on Oliver's fiction, only to find that all of his books were out of print already (The Complete Symphonies was first published in 2005), and the asking price for used copies was exorbitant. Ostensibly good news was on the way, however, when I learned that Centipede Press was going to publish Oliver's complete works in one volume called Dramas from the Depths. When I checked that book, though...well, just look at this shit!
.
However, as is often the case when you first hear about something -- a new writer, a new word -- I found myself stumbling across his name pretty frequently after that, even finding a few of his stories tucked away in anthologies I already owned. As I didn't know who Oliver was before, his name never registered any interest when initially perusing these anthologies, but now I realized I could sample his work before deciding whether or not I wanted to, some day, spend way too much money on a single book. So now I've read a couple of his stories, and unfortunately they're both excellent.
.
(A quick aside: the title of this post has nothing to do with The Complete Symphonies of Adolf Hitler, and, in fact, nothing even to do with the story from which I pulled it. I just thought it had a nice ring to it.)
.
They're also quite different from each other, despite both belonging to the same genre and featuring some level of animal cruelty. The first, "Mrs. Midnight", can be found in volume two of Ellen Datlow's The Best Horror of the Year, and it's a fairly pulpy story, in the best sense. On the back of the book, there's a rundown of each story, with a few words devoted to describing the contents, and "Mrs. Midnight" is said to be about "a television presenter [who] stumbles upon the chilling connection between a forgotten animal act and the Whitechapel murders". I believe I've already mentioned that I'm not made of stone.
.
The narrator of "Mrs. Midnight" is Danny Sheen, host of the British show I Can Make You a Star. He's one of those blunt, informal, egotistical, but not wholly unlikable showbiz types with no discernable talent of his own, other than being comfortable in front of a camera. His show is a big hit, and because of this he gets roped into various charity events, none of which interest him much, particularly the one that pertains to this story. The charity is called the Save The Old Essex Music Hall project, and is just what it seems to be. There's an old theater, called the Old Essex, which has sat in disuse since 1888, following a fire that gutted the place, and it's now going to be torn down unless somebody does something to convince the powers that be that it shouldn't, and Sheen is the big name they've pegged to help out. So, with Jill Warburton, who is the cultural advisor for the mayor and the one spearheading the project, and Crispin de Hartong, foppish architectual expert and former host of a home makeover show called Premises, Premises..., Sheen heads to the Old Essex for a first look.
. 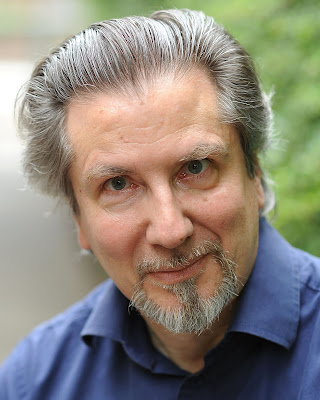 While there, he finds a wad of old playbills crammed behind a bar. On one, he sees a list of acts that performed on the night of the fire. Among them are famous names of the British music hall yesteryear, such as Dan Leno and Little Tich. Further down is an unfamiliar act, listed as "Mrs. Midnight and her Animal Comedians". Genuinely interested, to some degree anyway, Sheen agrees to do some research into this. The fruits of that research are a fair chunk of what makes "Mrs. Midnight" worth reading, so I don't want to spoil it, but I will say that, obviously, Jack the Ripper starts to enter into things, and Sheen finds himself consulting an old cohort who happens to be a "Ripperologist" named Bill Beasley, who's developed his own theories about the Ripper's identity over the years...
.
I think his idea was that it was Gladstone and Queen Victoria in collaboration, which is loony of course, but not as loony as that daft American bint who thinks it was Sickert the painter.
.
The above mentioned theory is, indeed, daft, but can't possibly be the daftest one every devised by an American.
.
In any case, what Sheen goes on to discover is considerably insane, and quite imaginative, and quite disturbing. It's a fun, eerie, strange story that hit certain areas of interest for me, by which I don't just mean Jack the Ripper, but also weird old showbiz acts from the 19th century, and the dark undercurrents of that era in London. Plus, with that reference to Dan Leno, and an element of gender confusion that's introduced, I was put in mind of one of my favorite novels, Peter Ackroyd's Dan Leno and the Limehouse Golem, which might well have inspired Oliver to write "Mrs. Midnight". Not that the two are all that similar, but they certainly approach two very similar things, and make certain shivery connections. Good stuff, is my point.
.
The other story I read is called "The Children of Monte Rosa", and it can be found in volume 19 of Stephen Jones's Best New Horror (I know, it's those two again! Well, we'll call this rematch a push). "The Children of Monte Rosa" is very different from "Mrs. Midnight", being much less pulpy, and far less eventful, in any obvious way. Not that plenty doesn't happen in "The Children of Monte Rosa", but rather that what does happen often feels disconnected from any clear meaning. Even by the end, when some things seem to be tied up, we realize that there's far more that we still don't know, and that, really, nothing has been explained at all.
.
The mode in which Oliver is working here has a rich history in horror fiction -- it's the one that finds an English (or American, but often English) couple, or family, on vacation, in some exotic European country (in this case it's Portugal; Ian McEwan wrote a whole novel on this premise, The Company of Strangers, which is set in Venice. See also Don't Look Now and etc.), where they meet another couple, or family, that turns out to be most odd. Here, the parents of the narrator, and the narrator himself, a young boy, meet Hugh and Penelope de Walter, British expatriates who fascinate the narrator's mother with their surface oddities -- their dress, their choice of drink -- and, being the forward type, the mother insinuates herself and her family into the de Walters' existence, into which they are willingly accepted. To such a degree, in fact, that they are invited to the de Walters home, which is where everything, such as it is, happens.
.
The rough part about describing a story like this is that by listing some of the strange occurences, I would essentially be ruining "The Children of Monte Rosa", at least as a story. Not as a piece of writing, bu still, the accumulation of subtly -- and less subtly -- bizarre episodes is where the meat of this kind of story can be found. But it's worth mentioning that, shortly after the family arrives at the de Walters home, the young narrator is excused to explore the surrounding land. He finds a well, tucked into a lovely green spot near the house, and sitting at that well is another young boy. This young boy is named Hal, and he's a bit aggressive with the narrator when it comes to the subject of cricket, though the narrator (who is obsessed with the sport) has never heard of Hal's favorite player, and vice versa. As their childish game of one-upsmanship progresses, Hal becomes more irritable, finally yelling at the narrator to leave, which he does, but...
.
The sound of his cry rang in my ears. I turned from him and ran up the path to the top of the slope. When I had reached it, I turned again and looked back. Hal was still sitting there on the lip of the old well, his heels banging against the stones. He was facing in my direction but I could not tell whether he was looking at me or not. The light, which was not quite right in that strange garden, had turned his eye sockets into empty black holes. I turned again and ran. This time I did not look back.
.
When the narrator gets back to the house, he encounters Penelope de Walter, who asks if he met the little boy. The narrator says that he did, and Penelope makes him promise to not mention the boy to anyone. And then things get crazy.
.
I feel like I'm doing Oliver a little bit of a disservice here today by not plundering these stories more fully, but "The Children of Monte Rosa" is particularly vulnerable to having its effects ruined by simply summarizing its inexplicable narrative. Both stories display a deft hand with two very different styles of horror, and I wouldn't dream of ruining their impact.
Posted by bill r. at 1:00 PM

A quick aside: the title of this post has nothing to do with The Complete Symphonies of Adolf Hitler, and, in fact, nothing even to do with the story from which I pulled it. I just thought it had a nice ring to it.

Even though you said very little plot-wise about the how and what of "Mrs. Mystery" it, once again, feels just right for a deliberate, atmospheric film. I wish someone would, because I don't know if I've ever been fully satisfied with any rendition of Jack the Ripper onscreen. In fact, I can't even think of a straight one I've seen. All I can think of are takes on the theme, like Time After Time, where the character is used but in a fantastical way. Maybe it's like that in "Mrs. Mystery" too, but I'd still like to see it made.

Well, "Mrs. Midnight" IS like that, so if anyone ever filmed it, you still wouldn't get what you're after. It'd be a hell of a good movie, though!

I don't think I've ever seen a straight Ripper film, either. The closest I've come is probably MURDER BY DECREE, and that only counts because it's the least mystical. But wait, isn't Donald Sutherland a psychic in that one? So maybe that doesn't count either.

The best fictional account of the murders I've seen is the Abberline-centric sections of the FROM HELL comic book. Amazing as that comic is, though (and it is), it's also probably, ultimately, the most mystical version of all.

I appreciate Centipede Press's efforts to keep various horror titles in print, but do they have have to do it at $60 to $150 a pop?