The Kind of Face You SLASH!!! - Day 1: The Beginning of a Whole New Way of Life

.
Joan Samson died in 1976. At the time, she was working on her second novel, and her first novel, The Auctioneer, published in 1975, was being prepped as a film. The film, for reasons lost to time and indifference, never happened. Had the film been made, and had it been any good, Samson's novel might not be quite as obscure as it is today. Which isn't to say that it's entirely forgotten: a bathroom/reference volume published last year called The Horror Book of Lists includes a list put together by Bentley Little of his favorite horror novels written by people who, for one reason or another, never turned to the genre again, and on Little's list was Samson's The Auctioneer. Not only that, but later this month Centipede Press, home of insanely overpriced horror fiction, is putting out a deluxe reprint of the novel, with an introduction by crime and horror writer (and Westerns, too) Ed Gorman.
.
Reading the novel now, it's not hard to see why some writers and editors in the field have refused to let The Auctioneer die. It's a flawed, but mostly very good, piece of work, both very much of its time, and timeless, and original in a way the modern horror fiction almost never is. The story Samson tells is a simple one, pushed, at times, to frustrating lengths. At the very beginning of The Auctioneer, we meet most of our major characters. There is the Moore family, headed up by John, and his wife Mim. They are farmers, whose home and land is located at the very limits of the small town of Harlowe, New Hampshire. They have one child, a four year-old girl named Hildie, and John's mother (known in the novel only as "Ma") lives with them as well. As the novel begins, they are visited by the town sheriff, a pleasant put sluggish man named Bobby Gore. There has been a severe uptick in crime around Harlowe lately, severe by their standards anyway, which was topped off by the strangulation murder of Amelia Fawkes, who rented out rooms to out-of-towners. Gore has been unable to solve this murder, a fact which both troubles and embarrasses him. During his visit with the Moores, Gore lays out the essentials of Samson's story when he relates two things: an auction has been scheduled to support the hiring of police deputies (Gore is not only the sheriff, but the only cop in Harlowe, period), and both parts of that idea -- the auction, and the need for deputies -- were suggested by Harlowe's newest citizen, Perly Dunsmore. Dunsmore, we learn, is an auctioneer by trade, and though he is a city boy by birth, and general worldliness, he has been to Harlowe before. In fact, a year or so before he moved to the town for good, he rented a room from Amelia Fawkes, and it's her home that he's recently moved into.
.
This auction, Gore goes on to say, will need items to auction off, and the Moores give him a few odds and ends that they neither need nor use. After the auction, the Moores are surprised to receive a check from Dunsmore, for a small percentage of the money their donated items sold for.
. 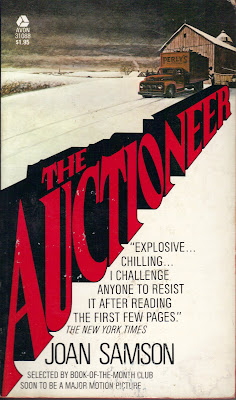 Labels: Joan Samson, October Project, The Auctioneer, The Kind of Face You Slash

Wow, what a great and sinister horror movie this could make, if done right. It combines the sense of dread one gets with the rural, kind of half-educated characters often uses with the sinister, scheming urban characters, in this case, Dunsmore. The kind of horror movie where you never really see much of anything happening but everything keeps closing in all around you. I wonder why the movie was dropped.

I do have a basic plot question: As they accumulate things to auction, who's buying them? And if it's outsiders, how could they possibly get away with auctioning children? If it's just the crazy locals, then okay. But outsiders and most of the suspension of disbelief is gone.

Also, isn't Richard Harland Smith a contributor to that book of horror lists?

I don't know why the film was dropped. There's almost no information, outside of other reviews of THE AUCTIONEER, about Samson or the film or anything else on-line. Did her death grind things to a halt? If so, why? Brad Dourif would have been great as Dunsmore.

It's outsiders buying the auctioned items, but Samson doesn't a spend a lot of time on the "who", outside of that. Until the children are auctioned -- then we get a bit more texture. And it's outsiders buying the children, but I must say that is presented in a way that makes it entirely plausible, at least enough for the purposes of a work of fiction. Dunsmore sells it as an easier alternative to adoption. I'd have to quote way too much, probably, to bring it across, but Samson makes it work.

And RHS may well be a contributor. I'll have to check it out again when I get home.

I first heard of it in King's Danse Macabre reading list. I found it compulsively readable in a way few other horror novels I've read recently are. Yep, the way it all plays out is utterly plausible within the confines of the book.

Will, did you find the book a little strange at times, in the way Samson would just drop stuff, like the religious angle, particularly the Sunday School thing? Not that I minded, because I find horror's war on religion to be really boring, but it seemed off, the way she handled it.

Hmm, good question, but I think I rushed so headlong through the book that it seemed to not register as a ball Samson dropped. I often wonder how editors miss those kinds of things.

Boy, reading Bill's coverage of the book and seeing that great 70s-style cover make me really want to track down a copy.

I contributed to The Book of Lists: Horror - don't know if it's the same book Bill is talking about but it probably is. Our book was originally going to be called The Horror Book of Lists but the publishing house wanted to preserve a sense of continuity with The Book of Lists from way back.

Damn it! It is THE BOOK OF LISTS: HORROR!!

Can't I go one day without making a horrible factual error? Just one??