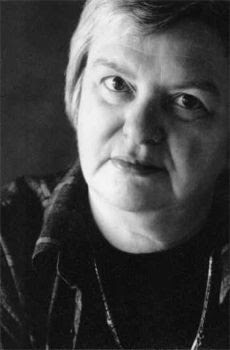 As a horror writer, Suzy McKee Charnas is probably most closely associated with vampires, which may go some way towards explaining my general lack of interest in her work. Not that I've read a whole hell of a lot of it, but some time ago I did make my way through her signature novel, The Vampire Tapestry. The one thing that appealed to me about that novel was its structure -- the novel is, as the title might imply, made up of interlocking short stories about a single vampire, a professor named Dr. Weyland. I also liked that the morality of the book could shift from story to story, so that the reader could never be comfortable with some easy, phony subversive idea that the vampire was the real good guy. What I didn't like about The Vampire Tapestry is that I simply didn't think it was very well written, or compelling in most of its specifics, or an especially interesting new take on vampires, this last being a near impossible thing for Charnas to have achieved (not that she would have cared, but I have a point of sorts to make here), because I really do not find the vampire species to be as endlessly and transformably fascinating as half of men and I guess all women do. I know, I know, they're darkly erotic. Well, did you know that some people have a thing for licking their lovers' eyeballs? Where's their epic trilogy?
.
Fortunately, neither of the Charnas stories I read for today's post have anything whatsoever to do with vampires. The first is a very recent story called "Lowland Sea", which was selected by Ellen Datlow for the second volume of her The Best Horror of the Year series. This is a plague story (the plague in question is nicknamed the "Red Sweat" and it, you know, kills you if you get it) that succeeds in staking out a reasonably unique setting -- the Cannes Film Festival -- and then doing nothing with that setting. For all Charnas seems to care, or know, about films, "Lowland Sea" could have been set anywhere that rich folks gather to flaunt their wealth and pretend to care about global catastrophes. Though I myself am not terribly fond of the way politics gets filtered through the self-righteousness and easy philosophy of the entertainment business, Charnas's stand-in for Hollywood hypocrisy, a writer-director known only as Victor (whose knew film, Hearts of Light, casts him as the white-skinned savior of impoverished African children) is so fantastical in his self-regard that I can't fully believe he's a fair representation of the common reality, even in a more low-key form that Charnas has expanded on for the sake of satire. When his estate has to shut its doors to keep the encroaching Red Sweat out, Victor has his army of showbiz hangers-on put on a show, acting out their own versions of TV shows and so forth, because the entertainment industry can soldier through anything. Or so is the cynical point I think Charnas is making.
.
Even worse, the real focus of "Lowland Sea" is an African refugee named Miriam who as the story begins has completed her journey from Victor's lover, one he rescued from an abusive family life in a war-torn country, to housekeeper he's become bored with, to periphery figure he barely remembers exists. This current existence leads to her ultimate fate, and the retribution she's able to squeeze out of it, and element of the story that is reasonably effective. But if Charnas's idea is to blow the whistle on Hollywood waste, indifference, and lip service, all of which are certainly worthy targets, it might have helped if Charnas didn't simply sense that such things existed in the world, but actually understood how they worked, and looked, and sounded. In the story, Miriam expresses a complete indifference to films (because she knew too much about the tricks, both of technology and personality, that allow them to be made), and it's more than clear that Charnas shares this indifference -- twice the inhabitants of Victor's estate are described playing movie trivia games. In one, they're supposed to name as many deaths, and the particulars of said deaths, as they could remember from the Final Destination franchise. In another game, the goal is to list "which actors have played which major roles in green body make-up'. Okay, so, the Final Destination game is stupid, but some less stupid version of a game kind of like that has probably been played by somebody at some point. But the green body make-up one? Is that what Charnas really believes hardcore movie fans talk about? Green body make-up, and who has worn it? If she's so far removed from the world she's writing about that she doesn't even know what the people in that world talk about, why pick it as a target?
. 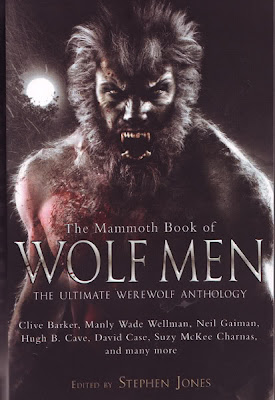 The second story for today is much more successful, though a certain distance from her subject matter, and an unwillingness to engage that subject as it actually exists, can be detected, although this time around the result is just reader amusement, rather than a near complete derailment of the story (to dispense with it quickly: the story was written in 1989, and in it a girl in her early teens recalls the lyric "shoefly pie and apple-pan dowdy"). "Boobs" is the title of this one, and it takes one of the classic metaphors of werewolf stories, or stories of supernatural transformation in general, and makes it explicit. The narrator of "Boobs" is a young girl named Kelsey, and due to her early development, at school she's received the nickname of the title. Kelsey is routinely bullied, by one boy in particular, and despite her stepmom's sincere and good-hearted attempts to help, Kelsey can find no rest. Until one day when she gets her first period and simultaneously transforms into a werewolf. Kelsey takes to this new existence, and decides to use her sense of confidence, and very real physical power, and desires, to her advantage.
.
As a narrative, "Boobs" could not be more simple. What's interesting about it where it ultimately goes. I don't want to spoil it, but let's just say that Kelsey, while she is our protagonist, and one we genuinely root for, she possesses a rather inconsistent morality. It's one thing, in fiction, to seek violent retribution against a merciless bully, but it's another thing to not stop there. My source for this story was the Stephen Jones-edited anthology The Mammoth Book of Wolf Men, and in his introductory notes to "Boobs", Jones notes a slight hiccup in the story's publication history, which to do with its first printing being possible only because Charnas agreed to soften the ending. Later, she was able to publish her preferred version (the one Jones prints, though he wasn't the first), and Jones quotes her as saying to her stepdaughter, who also objected to her original ending:
.
I reminded her of: a) the tendency in the young toward a very narrow morality ("What hurts me is unforgivably awful and what I do is okay"); b) the surprising failures of empathy in children that can lead to the most shockingly loathsome behavior committed in a very casual manner...
.
No argument from me, although the danger of presenting such things on the page -- depending on whether or not you care how people react -- is that since some acts are easier to justify as moral in a work of fiction, immoral acts in the same story performed by the same character, can seem not so different, or can feel like the cost of doing business, especially after our hero(ine) was treated so badly to begin with. But to travel to far in that direction is to engage -- and I'm going to go ahead and mix my metaphors here, because it's late and I'm sleepy -- in some rather tiresome hand-wringing. Besides which, "Boobs" is a first person story, and Kelsey's way of seeing things is simply her way of seeing things. Any attempt to express what Charnas herself believed would have been dishonest, and it's to Charnas's credit that she simply let Kelsey speak.
.
One other note: before reading "Boobs", I was reminded of its existence not by flipping through The Mammoth Book of Wolf Men, but rather a completely different lycanthropic anthology, this one edited by John Skipp, called Werewolves and Shapeshifters: Encounters with the Beast Within. "Boobs" is not included there, but in an introductory note to a story by Cody Longfellow called "Howl of the Sheep", John Skipp makes a passing and admiring reference to Charnas's story, and says that it was the inspiration for the film Ginger Snaps. Except that I've been able to uncover no credit for Charnas's story in the credits for Ginger Snaps. I don't necessarily blame Skipp -- he should have checked his facts, but it's a reasonable assumption to make, considering that the core idea of Ginger Snaps is, also, the core idea of "Boobs", except of course that Charnas's story came first. Ginger Snaps is a bit of a cult classic, having spawned at least two sequels. I wonder just how much tooth enamel Charnas has ground away in the years since its release.
Posted by bill r. at 1:04 AM