The Kind of Face You SLASH!!! - Day 30: I Really Do Not See How I Can Ever Explain This

.
One thing I don't like to do here, but do often anyway, is write posts about writers about whom I know very little, or have very little experience reading. It gives me less to write about, which might seem like a blessing until you find yourself trying to write some introductory paragraphs, and instead find yourself staring blankly at the computer screen, making "Uuuummmmmmmmmm" noises. Eventually, you might find yourself writing about how it's hard to write this stuff sometimes, just as a means to fill space. One does what one must.
.
Anyway, that's the situation I find myself in today as I write this post about Gene Wolfe. 2010 was supposed to be my Year of Gene Wolfe, as I didn't so much plan as think there was a good chance I would read a fair amount of this heretofore unknown-except-by-reputation author of various science fiction, fantasy, and occasionally horror classics. The man is a giant in his fields. A critic for the Chicago Sun-Times once said of him "Gene Wolfe is as good a writer as there is today...I feel a little bit like a musical contemporary attempting to tell people what's good about Mozart." Ursula K. Le Guin said "Wolfe is our Melville." Gene Wolfe, meanwhile, might wish that these people would rein that shit in a little. But he's been around for decades, and can probably shrug off the good as easily as the bad at this point.
. 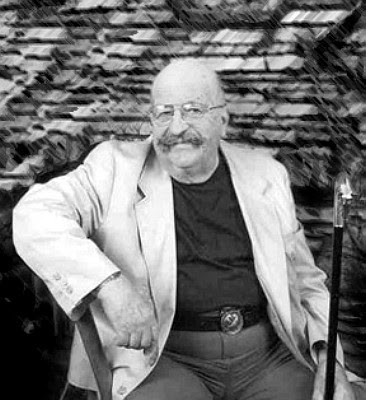 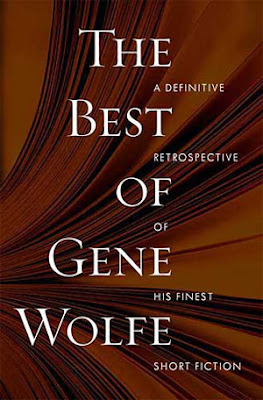 We're on much firmer ground with "The Tree is My Hat", written in 1999 for Al Sarrantonio's millennial horror anthology 999. This is the story of a man named Baden, an American, a government work -- what he does we're never told -- who suffers from some vague illness that could possibly cause him to hallucinate, and at any rate drives his temperature up as high as 109 at times. After being stationed in Uganda, Baden -- or "Bad" as he's called throughout-- has now been shipped to an obscure chain of islands in the Pacific rim, where he interacts with the natives and a man I have to assume is a Christian missionary named Rev. Robbins, though Robbins never seems to do much missionary-ing. Robbins will teach him much about the island, whose North Point is supposedly a sort of spirit land, and its people, who used to be cannibals. Baden will seek help for his illness from the tribal king, and from an American witch on the internet. He will also try, with apparent success, to reconnect with Mary, his ex-wife, who has been trying to find him during his travels for the government. He learns she followed him to Uganda, and hopefully will be joining him soon on the island. And he will meet a dwarf named Hanga, whose skin is whiter even than Baden's, and whose teeth are filed down to points, and who will become Baden's blood brother. Robbins will tell Baden that in the native tongue "hanga" means "shark".
.
"The Tree is My Hat", like "The Detective of Dreams" takes a classic structure, being in the form of Baden's journal. This will certainly invite many readers to question how much of what eventually happens in the story can be taken as fact (within the world of fiction) and how much should be chalked up as the hallucinations of very sick man who sometimes suffers from terrible fevers? You guys can do what you want, but if you've read these posts with any regularity over the past three years you'll know my preference is to regard it as all true. Baden's illness functions in ways besides just making us wonder about what's really happening, and besides that Baden questions his own sight more than once, before being convinced that what he's experiencing -- and doing -- is real. This is good enough for me, and the story would not carry the power it does without that conviction. Not for me, anyway, and what's so remarkable about "The Tree is My Hat" is how willing Wolfe is to throw in any idea, however crazy, or nasty, or sentimental -- and that's all there -- and instead of them sticking out like badly-hammered nails, he manages to pound them home, with the result that "The Tree is My Hat" is an amazingly rich and eventful piece of storytelling -- grand, even, though grandly bizarre and dark. Even hopeless, which sets it up as the direct opposite of "The Detective of Dreams". So perhaps Wolfe contains multitudes.
Posted by bill r. at 10:17 AM

One of my favorite Bergman's. Just terrific stuff.

Says the guy who's only read The Man Who Was Thursday by Chesterton, but that vibe is certainly in "The Detective of Dreams".

I've read no Chesterton so I will say nothing on the matter.

I'm writing a story: The shrub is my scarf.

You guys can do what you want, but if you've read these posts with any regularity over the past three years you'll know my preference is to regard it as all true.

Even in The Wizard of Oz?

Seriously though, the best example ever of being ambiguous about whether something actually happened or whether it was a dream or hallucination is American Psycho. That one pulls it off while most others don't. Either it's clearly a dream (movie version of Oz for instance) or it's clearly not (most everything else). In that one, it could work either way.

I find Wolfe difficult because of the denseness of his prose and the fact that most of his stories are puzzles that a reader has to solve. They're often not about what they appear to be about. It can be too much like taking a graduate seminar in postmodern fiction. It's a lot of work. Sometimes I'm up for it, but sometimes I just like to be told a story.

If you're at all interested in Wolfe (and I'm sure you know this already) you need to read "Book of the New Sun". It's remarkable, tricky but also quite entertaining, particularly the first three books. Wolfe can sometimes be annoyingly elusive, but this series truly is a masterwork and worthy of all the praise heaped upon it.

Greg - There must be something other than AMERICAN PSYCHO. I can't think of one at the moment, but there must be.

Tom B and Anon - I'm so relieved both of you find Wolfe so, as you each say, dense and elusive. He's so beloved, I was worried it was just me. And Anon, I have a whole crapload of Gene Wolfe books waiting to be read, including the BOOK OF THE NEW SUN. Although those probably need to be replaced, as they've been separated out from my shelves because my cat peed on them.