The Kind of Face You SLASH!!! - Day 26: A Kind of Winding Tunnel Through Tangled Undergrowth

.
About the short novel The Sound of His Horn by Sarban (really John W. Wall), Kingsley Amis once wrote this:
.
In its [the horn featured in the novel to signal the beginning of the hunt] archaic associations, its evocation of pageantry, its reminder of the hunter's carefree custo together with the terror of the hunted, it sums up the whole content and atmosphere of this novel, this strange combination of daydream and nightmare. So compelling is it that I shall always feel a slight twinge whenever I am reminded of the innocent English hunting song from which the title is taken.
.
Some decades later, Suzy McKee Charnas had this to say about the same novel:
.
The bloodthirsty, joyous call of the Count's [the novel's villain] hunting horn, the gold and green livery of his foresters, the sunlit glades of his carefully manicured woods, the gabbling yammer of the maniacal cat-women -- these flashes of from a vision at once false and true, enchantingly beautiful and starkly hideous, sink indelibly into the mind. A lasting, eerie echo is the mark of Sarban's achievement in this brief, unforgettable book.
.
You'd be hard pressed to find two people less suited to agree on anything than the staunchly feminist, pretty-far-Left Charnas and the acerbic, fairly Right-leaning Amis, but look at that: they both love Sarban's The Sound of His Horn. And you know what? They're both wrong!!
. 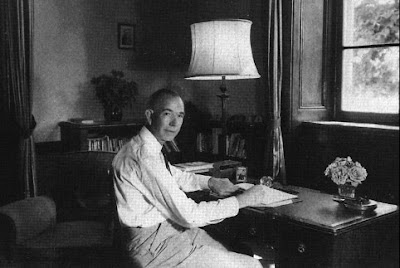 Now listen, I understand that no one likes to be disappointed, but I'm going to go out on a limb here and say that I hate being disappointed more than anybody in the history of the universe. The Sound of His Horn disappointed me hugely. I've known about the book, and have wanted to read it, for at least twenty years, since first encountering it through Charnas's short essay on the book (from which I quoted above) in Stephen Jones and Kim Newman's Horror: 100 Best Books. The later discovery that Kingsley Amis, a favorite of mine, was also a fan only sweetened the pot. But getting through this very brief novel was a terrible grind, and I would have abandoned it if I hadn't locked myself into it, with no fall-back, for this post.
.
Written in 1952, Sarban's novel (one of only two he wrote, though he also published a scattering of short fiction over the years) belongs to many genres, and horror might actually be the least obvious, though I can see where that argument can be made. What it is primarily is an alternate history story, playing with the by-now-but-not-by-then age old idea that Germany actually won World War II. I wonder if it might not be the first such novel, but in any event it is, in concept, one of the strangest. The way the novel is set up, the hero, Alan Querdilion is gathered with family and friends, having returned home from a German POW camp following the end of the war, which, it is implied, ended the way we know it did. But after a dinner table discussion on the morality of hunting gets heated, and Alan -- very quiet up to this point -- suddenly says "It's the terror that's unspeakable", he then begins telling an old friend the true story of his POW experiences, which largely involved a bizarre leap through time (and apparently timelines, or dimensions, as well), one hundred years into the future, and one hundred years into Hitler's "One Thousand Year Reich". 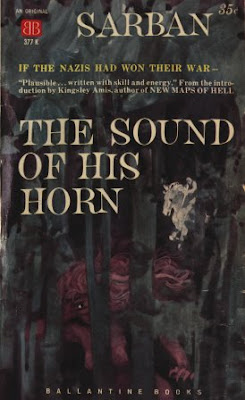 We're a little slow getting to that realization, though this is fine. Sarban, I want to be clear, was not an obviously bad writer, and much of the set-up for The Sound of His Horn played pretty well to me. The accident that leads him into the future also lands him in the hospital, and I enjoyed his interaction with the various nurses, and especially with his physician, Dr. von Eichbrunn, with whom Alan has the interesting, subtly chilling conversation that leads to the novel's central revelation. But as the story's strangeness grows -- we learn that this hospital is on the grounds of an, I guess, estate, owned by Count von Hackelnburg, the Reich's Master Forester (a position once held by Herman Goering), and much of the estate's business and pastime is given over to the perverse hunting of humans, some genetically altered to resemble animals, some not, and to the various, audience-particapatory fates of the captured game -- The Sound of His Horn turns into more of a guidebook than a novel. And a really dry one at that.
.
In her essay, Charnas actually touches on this when she says:
.
Prodigies of economy are achieved with a deceptively artless style. The gradually accelerating [You can say that again! - Ed.] narrative becomes not only an observer's tour of his own nightmare, but a love story and a headlong adventure tale as well.
.
Okay, but that hardly prepares the reader for passages such as this:
.
It was such a butt as no preserver of game in England would ever have contrived. A little copse, from the centre of which the undergrowth had been carefully cleared, leaving the saplings standing, was surrounded by a breast-high bank of earth well grassed over and topped by a fringe of low bushes...It was, in fact, more a ride, or alley, than a glade, for the opposite side was a continues thick hedge of bushes, looking natural enough to the eye, but no doubt layered and interlaced artificially in order to confine the game to the ride and force it to run straight past the butt within easy range. We were in the valley, and the ride, running lengthwise up to...
.
Oh for fuck's sake, enough already! And yes, on the one hand, such writing is necessary to give the reader some idea of the physical landscape being dealt with, but on the other hand, or on the other two hands, must the prose be so barren, and must there be so much of this kind of thing? I swear to you, at times it felt like this was half the book, and it may well have been. An "observer's tour", indeed! Well, who asked for that?? There is so little in the way of character -- something Charnas also acknowledges -- that when a bit of Alan's feelings about all this, about being hunted and everything, actually appears right there on the page, in print, I was a little startled. "What happened to all the that stuff about brushes and clearings and treelines?" I wondered. "Also, who's this Alan person?" Not to mention that referring to what occurs in the final thirty pages as a "love story", as Charnas does, is an astonishingly generous leap on her part. Imagine taking a long bus trip, and in the seat next to you was an attractive woman who you learn went to the same high school as you. The two of you talk about many things, for several hours, and at one point the bus almost gets hit by a van. Then she gets off the bus in Topeka, and you travel on to your home in Sacramento. After you get off the bus, you call your parents and tell them that you're pretty sure you just got married. In that same way, The Sound of His Horn contains a love story.
.
And "deceptively artless prose"...I know what Charnas means, and for the first third of this book I might nod my head in agreement, or at least understanding, but at times Sarban's descriptive powers desert him so completely than I wonder if he ever had them in the first place. When we finally meet Count von Hackelnburg, he's described as being enormous, gigantic:
.
He was a bigger man than any you have seen: a giant who made the great throne he sat on and the mighty oaken board before him look like things of normal size...
.
Indeed. I mean, now that's big! All of this, by the way, is occurring as the reader, and Alan, is learning of the depths of future Nazi perversity, giant-Roman-dining-hall-orgy style, and some of this stuff is quite insane. But it all reads with the same verve as that goddamn "copse" passage I quoted before, and my eyes glazed over just as often during this portion of the book as anywhere else. And believe me, that accounts for a lot of eye-glazing.
.
The Sound of His Horn is a book whose cult reputation quite baffles me. I'll admit that twenty-plus years of anticipation on my part couldn't have helped me approach the novel on its own terms, but I can be a pretty forgiving reader. If some of this interminable grassland shit had just been broken up by some interesting dialogue, I might be writing a very different -- or somewhat different, anyway -- post, but there's almost no dialogue of any kind to speak of, and after about thirty or so pages, what there is is purely functional. As is so much of the book: you need to know what this land looks like because in the last twenty pages that main guy is going to be hunted on it, so here it all is. You're going to need to know what future Nazis are up to, otherwise when that one guy gets hunted, you won't know why it's so scary, so here it all is. That's it. That's your book.
Posted by bill r. at 7:28 AM

Labels: Kingsley Amis, Sarban, Suzy McKee Charnas, The Kind of Face You Slash, The Sound of His Horn

A very funny takedown. Guess I can remove that one from the prospective reading list. BTW, have you read Michael McDowell?

I never have, unfortunately, but he's very high on my list of to-be-reads. I won't have time for him this year, but if I do this again next year I'll definitely include him. Or, if I read him before then and don't care for his work, then I won't.

His series "Blackwater" is compulsively readable. I'd recommend "The Elementals" or "Katie" as well. Also, he wrote the screenplay for "Beetlejuice." "Toplin," I think, is an interesting experiment that doesn't completely work -- a surrealist horror novel.