.
The back cover of my Wildside Press edition of Hugh B. Cave's Murgunstrumm & Others bears this admonition:
.
BE WARNED. THIS IS A COLLECTION OF HORROR TALES.
.
Which I rather like, for a bunch of reasons, among them that it somewhat ironically signals to the reader that this book is actually intended to be fun -- the spooky, creaking-stairs kind of fun, but fun -- and also because Cave, who lived to the enviable age of 94, was a veteran of the pulp magazines of the 20s, 30s, 40s, and onward, living through the horror boom of the 80s, publishing a number of voodoo novels along the way, and still onward, his last book being released in 2004, the year of his death. And there's something so delightfully old-fashioned in that playful warning that seems to beckon to readers with old-fashioned tastes, so that the result is the precise opposite of a warning: "Here: This is What You've Been Seeking". Murgunstrumm & Others is the single largest collection of Cave's fiction published to date, and it's a vast, wide-reaching best of anthology that was first published in 1977. Who knew Cave would go on to live another 27 years?
.
And Englishman, Cave spent a number of years in Haiti following World War II, travelling later to Jamaica where he ran a successful coffee plantation. This lasted into the 1970s, and all the while, beginning in 1930, he churned out his pulp stories and novels. Many, as I've implied, had a Caribbean, often a voodoo, flavor to them, but his most famous single piece of writing, the short novel Murgunstrumm (from 1932, first published in Strange Tales magazine) is set, I suppose, in America, though the evidence for this is limited to small things, like a reference to nickels. This is pretty convincing, I'll admit, but certain rural characters speak with what read like English accents ("I'll show ye to your rooms, and then I'll be makin' out the register."), and anyway the point is that geographically Murgunstrumm is a bit nebulous -- America, okay, fine, but where in America? It doesn't matter. The part of America, or England, where there are mental hospitals, and cities, and outside of those cities there are dark woods, and down the roods that go past or through those woods are inns. And if you've reached the Gray Toad Inn, then brother, you've gone too far.
.
This is what happened to Paul Hill and Ruth LeGeurn some months before Murgunstrumm begins. The story of their subsequent escape from the Gray Toad Inn is met by listeners not with horror, but with complete disbelief, with the result that Paul -- and, we learn later, Ruth as well -- lands himself in a mental asylum. But at the story's beginning, he's successfully escaping the hospital, and with the help of Ruth's brother Martin, and her wealthy father Armand, Paul embarks on a quest to return to the Gray Toad Inn, trick the two doctors who've wrongly committed he and Ruth to accompany him, and prove his sanity, and Ruth's, and expose to the world this ancient horror that exists and thrives unchecked.
.
Murgunstrumm is not that ancient horror. Murgunstrumm is sort of the butler of that ancient horror, and once I realized this I became terribly curious, because he's the title character. What could this mean? Where could this be going? How it got there is, Paul, the two doctors, and Jeremy (Armand LeGeurn's driver, and the kind of loyal gentleman who'd rather meet evil with his fists than talk about it) make it to the Gray Toad Inn, having witnessed some strange things along the way, and are greeted by dwarfish, toadlike, possibly inhuman Murgunstrumm (who, fortunately, doesn't recognize Paul). This is Murgunstrumm:
. 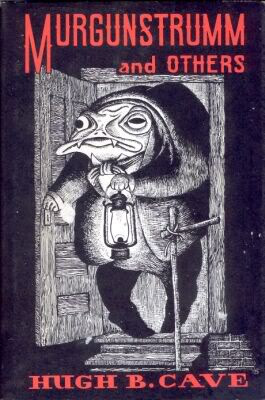 In the dining room of the Gray Toad Inn, Murgunstrumm agrees to serve the four men, but as they wait for their food, they take note of the pretty young woman who preceded them inside sitting with a strange man in evening clothes. Paul knows this woman is in grave danger, and as he and his compatriots sit in agitated contemplation, another man in evening wear appears to speak with Murgunstrumm:
.
The man was in black and white, the contrasting black and white of evening attire. But there was nothing immaculate about him. His hair was rumpled, crawling crudely about his flat forehead. His chalk covered face was a mask, fixed and expressionless. He walked with the exaggerated stride of a man steeped, saturated with liquor. His eyes were wide open, gleaming. His lips were wet and red.
.
If the guy's drunk, it ain't off booze, but off the red stuff. We'll soon learn that the Gray Toad Inn is a haven for vampires -- there are several -- and that Murgunstrumm, a human mortal, visual evidence to the contrary notwithstanding, is paid for his Renfield-like duties with leftovers from the vampires' feast. It's left to Paul and crew to bring this infernal madness to a halt, and quick-like.
.
In his introduction to Murgunstrumm & Others, Karl Edward Wagner, who put the book together (and whose relationship with illustrator Lee Brown Coye -- whose take on Murgunstrumm the character is seen above -- and Cave's own relationship to this book and that illustrator, certainly brings to mind Wagner's "Sticks", though that story is supposedly based on other incidents in Coye's life) quotes from a letter he wrote to Cave:
.
You wrote some excellent weird-fantasy stories. A good example is Murgunstrumm, which you did for the last issue of Strange Tales. I doubt if many readers today have read this, and yet I would consider it a classic...paced with a relentless ferocity that few writers have ever brought off.
.
Nothing says I'm required to agree with Wagner on everything, and here I don't, fully. There's an awful lot of set-up in the first chunk of Murgunstrumm that feels a bit turgid, and worse, once our primary characters are gathered at the Gray Toad Inn, one of the doctors, Allenby, attempts to escape, but is brought down by Paul, and brought back to the Inn. This escape attempt achieves nothing for anyone, least of all the story, and when Allenby and Paul return everything carries on as if neither had ever left. In other words, Murgunstrumm seems well padded in its first half, indicating to me that Cave was intent on squeezing as much scratch out of that penny-a-word rate he was no doubt being paid by Strange Tales as he could. More power to him, I suppose, but like a lot of pulp, it can read a little long. There's also the occasional knees-and-elbows kind of phrasing, where, for instance, the definition of "bore" Cave is trying to evoke is the "make a hole" one, and so a character is described as having "boring eyes". Well, hmm.
. 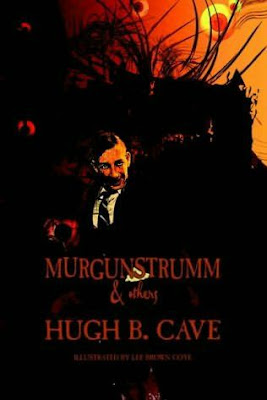 But so what? Or so I think anyway, because the second half of Murgunstrumm, which is pure capture/escape/horrifying discovery/good vs. evil momentum, comes pretty close to matching Wagner's description of the whole. I can't claim there's a great deal of depth here, or even much to delve into as a bit of analysis -- it's a plain old good time.
.
Then again, what of Murgunstrumm, he of the unexpected titular reference? He is a rather grubbily fascinating character, in no way morally redeemable, but who he is and where he comes from would seem to completely outstrip the vampires and our heroes in terms of reader interest. Cave knows this, and wants us to wonder about it, and wants us to think about him at the end, and why he's deserving of having this whole short novel named after him. I'm reminded a little bit of old Hollywood horror movies in general, but specifically -- because this is my go-to example for this kind of thing -- Val Lewton and Robert Wise's The Body Snatcher, in which Boris Karloff's John Gray and Henry Daniell's Dr. MacFarlane are the diseased and rotting heart and soul of the film, and Russell Wade's Donald Fettes, our hero, is tedious blank who's only there because it's rare that you're allowed to get away with placing your villains front and center and free of any moral balance.
.
Such is the case, I imagine, with Murgunstrumm, who's grovelling servitude masks both a hideous craving that can't even be justified by an undead curse and a manic rage, and who wonders in an out of the story, or is forced through it at gunpoint, carrying the majority of the weight by virtue of having that title hanging over his head. The story's ending, which hinges on Murgunstrumm, is unforgettable in its Grand Guignol chaos, and you can practically feel Cave's interest dwindling as Murgunstrumm recedes from the closing moments and the lovers step into the limelight again. Lovers are a dime a dozen, after all, but when will there ever be another Murgunstrumm?
Posted by bill r. at 7:27 PM

I was going to say, going by the Lee Brown Coye illustration, that ol' Murgunstrumm there bears a striking (some might say suspicious) resemblance to the Thing in that old Gothic horror number The Maze. Then I realized the story clearly pre-dates both the movie and the novel it was based on, so... well, I don't know, yet, but I still figure there's a gotta be fortune to be made by convincing somebody to sue somebody here.

One of my bosses at work (I have three folks tiered above me) knows Val Lewton's son. I think his name is Val Lewton too. So... just thought I'd throw that in there.