Yesterday I began staging a duel between two rival (probably not really) horror anthology series: Ellen Datlow’s The Best Horror of the Year and Stephen Jones’s The Mammoth Book of Best New Horror. There can and will be no kind of control over this experiment (or duel, whatever), unless I was willing to read all of the stories in the two volumes Datlow has put out so far, as well as all of the stories from the last two Jones books. And I’m both unable and unwilling to do that! But this duel’s (or experiment’s) utter pointlessness aside, volume one of Datlow’s series made a very strong showing, with, out of three selections, one solid story from Trent Hergenrader called “The Hodag”, and a truly excellent one by Adam Golaski called “The Man from the Peak”. Now it’s Jones’s turn, and one can’t help but wonder -- can one? -- how today’s selections will measure up?

To make this whole thing even more pointlesser, the Datlow book I chose for yesterday is from 2008, while the Jones book – volume 15 of Best New Horror – is from 2004. So why bother. Well, because, is why. As a quick bit of ancillary business, I want to point out that book series feature a fair amount of valuable and interesting “extras”. Both Datlow and Jones include a “Year in Horror” kind of introduction, in which they lay out what was published in the genre, from the mainstream to the furthest, dankest corners of the fringe. Jones also talks about film and other media, and he tends to be a bit looser in what he considers relevant to horror, spending a lot of time, when there’s any reason to, discussing the Harry Potter phenomenon, and so forth. Even if you wonder what that stuff is doing in a review of a year in horror, Jones’s introductions can be upwards of 80 pages long, so he’s not leaving anything out in favor of that wizard guy. Jones also, in collaboration with Kim Newman, puts together a rather depressing “necrology” for each volume’s given year, which amounts to dozens upon dozens of mini-obituaries for artists of various media (and, again, various genres) who passed away. Depressing, but informative.

But enough of that. I read two stories today, the first by Jay Lake, called “The Goat Cutter”. This one is legitimately bizarre, in a way that removes it from the pool of "weird" or "strange" stories that count as their own horror subgenre. I don't know if anyone has really defined or categorized the kind of story "The Goat Cutter" actually is -- and I should add that I don't know why anyone would feel the need to do so, but clearly people do -- but it feels to me be kind of the literary equivalent of psychobilly (that's a kind of music, right?). There's a lot of this stuff in contemporary horror, and its best-known practitioner would have to be Joe R. Lansdale. Though I like a lot of Lansdale's short fiction, this kind of white trash freak show story is not something I'm likely to seek out, unless he wrote it.

But Lake's story is pretty good, I must say. For one thing, Lake is a good writer, the best evidence of this being that he writes in a deep Southern vernacular, but he does so without resorting to unreadable dialect. In other words, in "The Goat Cutter" you won't find anything like this: "Maw, I kin he'p yew wit' dat dang mule in jes' uh sekint! But fust I hafta plow me up s'm corn!" You all know what I'm talking about. It's sickening.

No, this is what you'll find with Lake:

Me and my best friend Pootie, we liked to run through the woods, climbing bob wire and following pipelines. Trees is smaller there, easier to slip between. You gotta watch out in deer season, though. Idiots come out from Austin or San Antone to their leases, get blind drunk and shoot every blessed thing that moves. Rest of the time, there's nothing but you and them turkey vultures. Course, you can't steal beer coolers from turkey vultures.

Our narrator and Pootie are young men, just about to become sophomores in high school, and they like to spend their summers in the environment described above. Also found in that environment is one Doug Bob Aaronson, who, we're told, spends his time "roasting goats, drinking tequila, and shooting people's dogs." That "roasting goats" bit is the important part. His goat butchery is not just something he does -- it's a ritual. In Doug Bob's little patch of stolen land, there is also an old school bus, on which Doug Bob has written, or smeared, many things in goat blood, including Bible verses. The boys are not allowed inside the bus. 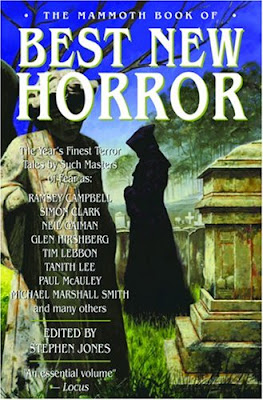 This is a short story, only about twelve or thirteen pages, but with that set up you can maybe imagine the gist of what's in store. The Devil is in that bus, is what's in store, and what works about "The Goat Cutter" is that Lake is not coy about it -- the Devil actually shows himself, and engages with the characters. And the scene where the boys and the reader first lay eyes on the Devil is something of a tour de force, a bit of mad brilliance that made me wonder why horror films are so bereft of this sort of thing. You take this story, and you take Golaski's "The Man from the Peak", and both are full of quite filmmable imagery, horror imagery that is lush and full and deeply bizarre. Where is this imagination on film?

So Lake has that going for him, and it's nothing to sneeze at. Where the story ends up is something I'm less sure about. It would be inaccurate to say that Lake ties things up in a neat little bow, but it wouldn't be off to say that all Lake's madness boils down a little bit small for my taste. Even so, there's much left unsaid, and the hints that what we're dealing with in "The Goat Cutter" is a full blown Biblical Apocalypse in the making is very intriguing.

The other story I read is called "Story Time With the Bluefield Strangler". It was written by John Farris, who is one of those writers who's pretty big time among horror fans -- at least during the 70s and 80s -- but is completely unknown to everyone else. Farris's best known work is probably The Fury, which was adapted to the screen by Brian De Palma (for the record, I've never read the novel, but have always really enjoyed that film). I know Farris best as the other of two novels I actually did read: All Heads Turn When the Hunt Goes By, which I liked a fair amount, and is considered something of a modern classic; and The Axman Cometh, which I sort of hated. Whatever my amiguous take on Farris, and despite the fact that he's been around a long time (he started with crime fiction in the 1950s), one thing that seems clear to me is that he's sort of the quintessential 80s horror writer. Prolific, full of sex and violence, full of kids who can see shit other people can't, voodoo, possession; but also serious about what he's up to, not writing horror (or at least not writing genre fiction) because that's where the cash is.

So the story, "Story Time With the Bluefield Strangler" is...not bad. The second half that title should let you know where the horror is coming from (it's coming from a guy who strangles people), and the first half should indicate that a child is somehow involved. The child is named Alison, who, at least since she was six, has been able to see young man who she refers to as "Big Boy", but who we come to know as Walter Banks, aka the strangler of the title. Alison alternately regards Big Boy as a boogeyman and an ally, the latter coming out when the little girl finds herself in a children's mental hospital, due to past trauma and her stories about Big Boy.

All the background, about Banks and Alison's trauma, are related to the reader by two other characters, a police detective named Ed Lewinsky, and Alison's therapist, a woman named Lorraine. Farris alternates the Ed/Lorraine scenes with Alison's childish point of view, where the sentences become short and simple, as though we were being taught to read. This gimmick is not as cloying as it might sound because, for one thing, it lets up a bit as the story progresses and Alison gets a little older, and because the youthful simplicity of the language highlights a certain chilling effect.

The thing about "Story Time With the Bluefield Strangler" is that it's a very professional piece of work, written in the first place, I suspect, because Farris wanted to play around with story structure. The story itself isn't much, and I doubt Farris would claim otherwise, but it's interesting the way he shifts in and out of perspective, and even ages (specifically regarding Banks/Big Boy/The Bluefield Strangler). All of which combines for a strong and effective ending. It's all very well-polished, which sounds like a backhanded compliment these days, and I frankly find that to be a bit depressing. So no backhand intended. Polish and professionalism are gratefully noted.

And there you have it! The great Jones/Datlow War That Never Even Really Happened is at an end! Man, what a bloodbath. I can't even tell who won, there's so much blood. That sure was crazy. Etc.
Posted by bill r. at 12:45 PM

It's Friday, the 8th. I cannot even begin to express how disappointed I am that you have dropped the ball this badly, and in public no less!

You two are gonna wind up together by the end of the movie, aren't you?